Just weeks after climate activists celebrated the apparent split between Perth festival Fringe World and its major sponsor Woodside Petroleum, a new partnership has been announced – with the fossil fuel giant transitioning its sponsorship to the festival’s non-profit parent company, Artrage.

Woodside’s funding will be directed to a new philanthropy program that will facilitate “a more [financially] sustainable organisation”, Artrage said in Thursday’s announcement.

But the move has disappointed activists, and highlights a broader issue in Western Australia’s arts industry, which continues to be dependent on funding from the mining and resources sector.

‘They are not wanted’

Over the past three years, a loose alliance of artists and activists have been campaigning to pressure Fringe World and Artrage to sever all ties with Woodside. Tensions heated up in December, when Fringe World encouraged performers to not speak out against its sponsorship arrangements – a request which, amid a record-breaking bushfire season and climate crisis, felt particularly incendiary to some.

So when Artrage announced in June that Woodside would no longer have naming rights for the festival, activists claimed it as “an important win”.

“We’re really grateful to [Artrage CEO] Sharon Burgess and the Artrage board for having listened to its own stakeholders, done the right thing and refused to promote Woodside any longer,” Perth-based 350 activist Anthony Collins told Guardian Australia in June.

But on Thursday, Artrage revealed the new deal: Woodside’s funding is being transferred to the parent company, directed towards “staffing, technology, planning and donor servicing to enable … a robust philanthropic program”.

While Collins is pleased that Woodside no longer has naming rights, he says he is disappointed.

“WA’s artist community has made its feelings known about Woodside’s involvement in the arts: they are not wanted,” he said. “We hope that Artrage seeks to engage with artists in a genuine discussion about transitioning away from fossil fuel funding and aims to break this new deal as soon as possible.”

In a media release, Burgess defended the move.

“As the third-largest arts organisation in the state, Artrage needs to achieve its philanthropic potential so that we can become a more sustainable organisation with a diversified and balanced income portfolio,” she said.

“Artrage is not in the business of making political statements or taking a stance on the subject; we will leave that up to our artists.”

Breaking up is hard to do

Speak to anyone involved in arts sponsorship in WA and they will tell you the same story: in the current funding environment, it is impossible for arts companies to completely wean themselves off sponsorship from the fossil fuels sector.

Woodside is also a sponsor of Barking Gecko Theatre, Yirra Yaakin, the WA Symphony Orchestra and WA Ballet. Fortescue Metals Group supports Black Swan Theatre Company; BHP is the principal partner of Awesome Arts; Chevron has the naming rights for Perth festival’s music strand (also targeted by activists); Tianqi Lithium is the naming sponsors of a gallery of the new WA museum Boola Bardip; and Rio Tinto is the premium partner of CinefestOZ.

Shelagh Magadza, executive director of the Chamber of Arts and Commerce, the state’s peak policy and advocacy body for the arts sector, sees the sector’s reliance on mining and resources as a microcosm of the whole economy.

“The government has come to rely on corporates – and in WA that means the resources sector – to boost the money going to the arts,” Magadza said. “The lack of [funding] diversity is a problem for both the arts community and for the wider economy. The resource industry is prey to the boom and bust cycle. What happens when the money dries up? Does the government just sit back and wait for arts organisations to fail?”

James Boyd of Creative Partnerships Australia said while the relationship between the resources sector and the arts in WA had been mutually beneficial, there was a looming backlash, led by young people.

“If you want to reach younger audience, as all arts companies do, you have to deal with the fact that this generation are deeply concerned about the climate change, and are critical of the behaviour of companies such as Rio Tinto – whose destruction of sacred sites in Juukan Gorge caused so much anguish,” Boyd said.

He said if the WA creative community is to become less reliant on the resources industry it must embrace philanthropy, as Artrage says it is intending to do – a funding model that is currently far less significant in WA than it is on the east coast.

“The philanthropic sector has proved to be very steady even during economic downturns. Philanthropists seem to stick with you during hard times, while corporates are less able to do this. Their motivations are very different.”

Nothing changes for activists

Writer-performers Sam Fox and Noemie Huttner-Koros are co-founders of Arts and Cultural Workers for Climate Action. They were angered when they learned that Artrage and Woodside were not completely severing ties.

“Divestment means divestment, not moving money around and repackaging it,” Fox said. “This is not a transition away from fossil fuel sponsorship at all.

“These corporate tactics of rebranding and making gestures toward sustainability are central to our society’s inaction on climate change. To simulate or gesture toward action is worse than inaction.”

Huttner-Koros reaffirmed the rights of Fringe World performers to agitate for change.

“[Activism] is our duty and responsibility. By refusing to divest, Fringe World is putting the interests of a fossil fuel company ahead of the rights of communities on the frontlines of the climate crisis,” she said.

Fox added: “We have a short amount of time to save the planet. I don’t care if Fringe is shut down for a few years.

“The arts industry in Western Australia will not die if money disappears from the resources sector. It will evolve and find other sponsors, in some cases, get better … you can’t ignore your moral obligations to the planet.” 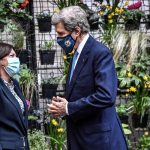