On his first day at the White House, Joe Biden earned praise for following through on several campaign promises, committing the US to strict climate goals and a greener future. Now, nearly six months into his presidency, several of those commitments are being put to the test, and already, many are falling apart.

A court last week ruled that the Biden administration did not have the authority to unilaterally pause oil and gas lease sales across the US. The decision came alongside news that congressional bargaining over Biden’s climate and infrastructure bill is hitting a wall with Republicans and the administration is now considering a slimmed-down version.

Together, the developments are compounding a list of worries by environmentalists. Many fear Biden’s promises on climate may turn out to be more talk than action.

“We aren’t seeing the fight and the grit that gives us the full hope,” said Jeremy Nichols, climate and energy program director of WildEarth Guardians. “There’s something to be said about posturing and sending the message that you are for real, these aren’t just words, that these are values, and they are going to fight for them and build the right level of support to get things across the finish line.”

Last week’s ruling on new oil and gas lease sales, handed down by a Trump appointee, Judge Terry Doughty of the US district court for the western district of Louisiana, creates a major hitch for Biden’s climate action plan. Louisiana’s attorney general and 12 other states originally filed the suit against the Biden administration’s leasing pause, arguing it would harm their states economically. Most of those states heavily rely on the sale of oil and gas and subsidies for the industry.

“I think it’s legally wrong,” said Drew Caputo, vice-president of litigation for lands, wildlife and oceans at Earthjustice. “Every presidential administration has delayed or cancelled lease sales. The Trump administration last year delayed offshore oil leases because of the pandemic and changes in the market. There were no complaints, literally, and it was an unremarkable thing because that kind of thing happens all of the time.”

Of the judge’s ruling, a spokesperson for the interior department said: “We are reviewing the judge’s opinion and will comply with the decision. The Interior Department continues to work on an interim report that will include initial findings on the state of the federal conventional energy programs, as well as outline next steps and recommendations for the Department and Congress to improve stewardship of public lands and waters, create jobs, and build a just and equitable energy future.”

The agency said the interim report will be released in early summer.

Drilling on public lands accounts for nearly a quarter of all greenhouse gas emissions in the country. In one of his first acts as president, Biden issued an executive order that paused new onshore and offshore federal fossil fuel lease sales in order to let the administration study the future of the practice and its climate repercussions.

Now, however, it’s unclear how strongly the administration plans to fight the injunction and whether the Department of Justice will counter in courts – a silence that is frustrating environmental groups. The White House did not return a request for comment.

“We don’t know ultimately if the interior [department] is going to appeal or what they are going to do. Worst case scenario is that leasing has to resume,” said Randi Spivak, public lands program director at the Center for Biological Diversity. “He did promise to end federal leasing and we’re going to hold him to it.”

So far, the Biden administration’s record on the climate crisis has felt out of step with his messaging. In March, Biden agreed to advance a New Mexico lease sale that was viewed as an 11th hour move by the Trump administration. The justice department later agreed to go to court and back Trump’s decision to grant oil and gas leases on federal land across Wyoming and Montana.

Another decision, to allow leases in Alaska’s north slope known as the Willow project, is seen by many as a political maneuver aimed at winning Democratic voters. Alaska’s Republican senator Lisa Murkoswki is set to face a tough re-election next year.

The theme of inconsistent messaging continues with Biden’s initial $2tn infrastructure plan. Last week, 11 Republicans moved to back a $1tn bipartisan deal, half the original price tag and investment progressives and climate activists were promised.

Some groups and progressive lawmakers have come out against the compromise. Earlier this month, the Democratic US representative Martin Heinrich of New Mexico tweeted: “An infrastructure package that goes light on climate and clean energy should not count on every Democratic vote.” On 16 June, the presidents and CEOs of several environmental groups, including the former Obama White House chief of staff John Podesta, sent a joint letter to the House speaker, Nancy Pelosi; Senate majority leader, Chuck Schumer; and their Republican counterparts, urging “bold, ambitious and swift measures to tackle the climate crisis”.

“The stakes are enormous,” they wrote. “Failure to act at the scale that science and justice require will mean more health and environmental costs for individuals, communities and taxpayers, and more lives and communities devastated and destroyed by wildfires, extreme weather events, infectious diseases, and the deterioration of ecosystems that we depend on for food, employment, and recreation.”

Through the infrastructure bill, Biden had promised a commitment to climate action that would involve new green job creation, a transition to renewable energy, and new investments in environmental justice communities. A White House advisory committee just last month announced initial recommendations for tackling pollution near disenfranchised neighborhoods – with many proposals relying on the significant revenue stream first promised by Biden’s infrastructure bill.

Still, Biden has experienced notable success with other climate and environmental promises. He recommitted the US to the Paris climate agreement, revoked permits for the Keystone XL pipeline (setting the stage for the Canadian power company to terminate construction this month), and suspended oil and gas leases in Alaska’s Arctic national wildlife refuge. 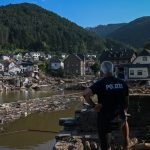 After Deadly Floods, a German Village Rethinks Its Relationship to Nature

Is Biden serious about climate? His 2,000 drilling and fracking permits suggest not | Wenonah Hauter

António Guterres on climate crisis: ‘We are coming to a point of no return’ | United Nations