Soon, a few of the more shameless newspaper commentators will urge the rest of us to “learn to live” with climate breakdown. Soon, a couple of especially sharp-elbowed cabinet ministers will sigh to the Spectator that, yes, carbon emissions should ideally be slashed – but we must make a trade-off between “lives and livelihoods”. Soon, a little platoon of Tory backbenchers will respond to TV pictures of another devastating flash flood or deadly heatwave by complaining about “fearmongering”. “Why is the BBC so doomy?” they’ll ask, as the death toll rises.

Soon, shockingly soon, the cheap shots, the brazen stat-bending and the coprophagic cynicism that have warped British discourse since March 2020 will migrate from Covid to an even bigger and more lethal crisis: the climate emergency. And just as they have helped shape the self-inflicted catastrophe that England has embarked upon this week, so they will work their terrible influence on that one.

Scientists and politicians the world over have noted the strong similarities between coronavirus and climate breakdown. In papers and speeches, they have drawn lessons about some of the best ways to handle both: go early, go big, and don’t pretend you can strike some special deal with a lethal force. The UK’s week-long delay in locking down in March 2020 led to about 20,000 deaths, estimates Neil Ferguson. Every year wasted in reducing carbon emissions pushes us further into extreme weather, environmental destruction and the loss of human and animal lives. These lessons appeared to have been fully imbibed by Boris Johnson and his chancellor, Rishi Sunak, when they vowed last March to do “whatever it takes” to tackle the pandemic.

Goodbye to all that. Starting this week, our prime minister is no longer even pretending to keep down infections in England; instead, he is allowing more people to catch the disease, hospitals to drown amid case numbers, and thousands more Britons to die. That scenario isn’t drawn from the government’s critics: it is the one publicly accepted by Whitehall. It is less a policy than a white flag.

Even as global health experts unite in condemning the UK as a “threat to the world”, Johnson merely shrugs and asks: “If not now, when?” It is an artless, shortsighted phrase that will come back to haunt him, that will be flung in his face at future press conferences and resurface whenever that public inquiry finally begins.

As ever with anything involving this prime minister, the fatal farce of “freedom day” will be refracted through a thousand talk-radio discussions about Johnson’s fitness to govern. But the Tory leader is surfing a wave far bigger than himself. Riding forces larger than himself is what Johnson has done throughout his career, and it is what makes him such an effective political campaigner. It is also what should make us worry about the terrain on which future political battles will be fought.

What he has correctly identified is a growing extremist individualism. It is an ideology that claims to be about freedom when really it means selfishness; and it sees any curtailment of its liberties, no matter how justified or temporary, as Stalin sending in the tanks. Last weekend, the chair of the Tory 1922 backbench committee, Graham Brady, claimed that face masks were really about social control. Railing at voters for meekly accepting a measure designed to reduce the spread of infection, he accused them of suffering from Stockholm syndrome. “The line between coercion and care becomes blurred, the hostage starts to see the man with the AK-47 who holds him in a cell not as a jailer but as a protector.”

Selfishness is hardly a new characteristic of our politics. But what is striking today is how the politicians and commentators using it sneer at those who stand in their way. There is a cruelty to this politics that is breathtaking. The rightwing commentator Douglas Murray complained in the Sun on Sunday of Britons’ “terrible fearfulness”. He didn’t trace this to the fact that the country is mourning more than 150,000 Covid deaths.

Before Covid came along, Murray had a line in rubbishing activists who have the gall to sound the alarm on the climate crisis. A “fringe eco-lobby”, he declared in the Daily Mail, was committing “an abuse of children on a massive and unforgivable scale” by making them fearful of the future. The Covid deniers are, as often as not, also the climate deniers; who are – wouldn’t you know it? – the most extreme Brexiters. Earlier this year, Steve Baker, the MP who calls himself the “hardman of Brexit” (which does admittedly sound better than his real title of “former software consultant”), joined the Global Warming Policy Foundation, an organisation that claims to speak “common sense on climate change”. Its honorary president is the climate-change denier Nigel Lawson. The carousel goes round and round, but the faces on it never seem to change.

Lawson, as Margaret Thatcher’s chancellor, played a vital role in breaking the social contract that had underpinned postwar Britain, on everything from welfare to pay to pensions. What his successors are now doing is trying to dismantle what’s left of the ethical contract Britons still hold with each other. If they succeed, the politics of extreme individualism will make impossible the collective response essential to tackle social crises, from Covid to social care to climate.

In his new book, Go Big, the former Labour leader Ed Miliband writes: “If we treat the climate crisis as a technical fix or technological problem to be solved and think we can do so while leaving other injustices in place … we will fail.” He is right. But that is exactly how the new right has dealt with the pandemic. Johnson’s government didn’t even attempt a strategy of zero Covid – instead it spent the thick end of a billion quid on making sure Nando’s was half-price for the summer. And it got lucky: Covid vaccines were in production within months. On climate, nearly every techno-fix has remained a money-sucking mirage, as with carbon capture and storage.

And each time, cooperation is just dismissed as political impossibilism. Even when politicians nod their heads while scientists urge that “no one is safe until everyone is safe”, nothing happens. While nearly 70% of adult Britons have now been double-jabbed, only 1% of people in low-income countries have received even one dose. While the home secretary, Priti Patel, was cheering on England in the Euro finals, Ugandans in her parents’ former home of Kampala were turning their equivalent of Wembley stadium into a Covid hospital.

This smirking ignorance is possible for as long as those people who die, whether of Covid or climate breakdown, are brown or black or poor. But even the likes of Murray and Baker and Lawson can’t rely on that. Not when a flood can burst into a German care home and drown the residents. Not when a wildfire can consume one of the richest provinces in America and the world. Some bunkers you just can’t buy.

The IPCC report is a massive alert that the time for climate action is nearly gone, but crucially not gone yet | Greg Jericho 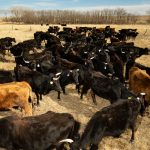 A Different Kind of Land Management: Let the Cows Stomp