Australia is the worst performer on a list of the world’s 50 largest economies for “green recovery” spending to kickstart economic growth after the Covid pandemic, according to research conducted for the United Nations environment program.

The research suggests Australia spent US$2bn on green initiatives during the coronavirus recovery, compared with US$57bn in France, US$54bn in South Korea, US$47bn in Germany, US$42bn in the United Kingdom, US$41bn in China and US$24bn in Japan. Germany spent $9bn on hydrogen alone.

The work draws on evidence collected up to February 2021 by Oxford University’s Economic Recovery Project. The initiative is supported by the United Nations and the International Monetary Fund.

Australia got the wooden spoon – coming in at the bottom of the list.

The UN-backed research differentiates between rescue and recovery spending during the crisis. Rescue spending encompasses management of the public health crisis and fiscal support to insulate against the economic shock, whereas recovery spending focuses on rebuilding and retooling economies post-Covid.

“What we found is Australia has spent considerably more on recovery initiatives than most other countries, I think only the United Kingdom has done more,” O’Callaghan said.

“That’s understandable because Australia is at the tail end of the virus and we are trying to get the economy going again, while other countries are still in it. Interestingly, Australia has also been a standout on green spending, but unfortunately, on the negative side.

“Overall we find that 18% of total recovery spending around the world has gone towards green initiatives, but in Australia, the figure is 2%. Of the major economies, Australia was the worst.”

O’Callaghan said this was “a missed opportunity” for the Morrison government and a bad outcome for the country.

“The consequences for Australia of low green investment are mammoth on both economic and climate grounds,” he said.

“This is the time for us to be reorienting our economy to industries that will drive future growth. The notion of a gas-fired recovery is ridiculous and the world sees that. Recession enables rebirth – now is not the time for dirty initiatives.”

Last year, the International Monetary Fund urged both major and developing economies to pursue a green recovery from the coronavirus pandemic.

The IMF said if nations applied a combination of carbon pricing and green stimulus, coupled with compensation for lower-income households to make the transition fair, the world would plot a sustainable path out of deep recession and combat the growing climate crisis.

Some Australian business groups have also urged the government to pursue a green recovery.

Australia also remains under pressure from key allies to lift the level of climate policy ambition. The British foreign secretary, Dominic Raab, said on Thursday the UK expected Australia to “stretch” climate commitments and set out a plan to meet them before a major summit later this year.

This week, Morrison reiterated his intention to reach net zero emissions “as soon as possible and preferably by 2050” and transition Australia to a “new energy economy”. he made the comments in a conversation with Joe Biden’s special presidential envoy for climate, John Kerry.

The US and the UK last week issued a joint statement urging all countries “to take the steps needed to keep a 1.5C temperature limit within reach, including through ambitious nationally determined contributions and long-term strategies to cut emissions and reach net zero”.

Official projections released in December suggested the Morrison government was not yet on track to meet its 2030 emissions target of a 26% to 28% cut compared with 2005 levels. Scientists say that target is roughly half of what Australia should be doing over that timeframe.

The Australian ambassador to the US, Arthur Sinodinos, this week implied the Morrison government was considering updating its targets before the Glasgow conference, known as Cop26.

Sinodinos told the US Studies Centre event in Canberra it was “better to underpromise and overdeliver” when setting emission reduction targets, and Australia wanted to work with the US on technologies that would “really move the dial”.

“Our view is targets are something which are important in their own regard, and Australia is doing further work on what that means in the future as we go to Cop26,” he said. 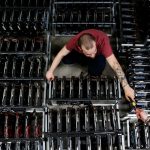 ‘It’s like a rocket ship’: videos show petrolheads behind the wheel of an electric car | Electric vehicles