A senior European diplomat says he “absolutely” hopes Australia and other developed countries embrace stronger 2030 climate targets, describing the coming decade as “crucial” in the fight against global heating.

With just 80 days until the next major climate summit, the EU’s ambassador to Australia, Michael Pulch, said developed economies should lead by example in reducing emissions. He said a landmark scientific report confirmed “that we are facing a global fundamental challenge and that we have to act now”.

In the interview with Guardian Australia, Pulch also sought to allay the Australian government’s fears that the EU’s planned new carbon border tariffs could undermine global trading rules and were a case of revenue-raising.

He characterised it as “an environmental protection tool” that would have only a modest impact on Australia, but added it may serve as a model as other major players – including the US, Japan and Canada – considered similar policies.

Amid Coalition divisions in the lead-up to the climate summit in Glasgow in November, the Australian government has not formally committed to net zero emissions by 2050, saying only that it hopes to achieve it as soon as possible and preferably by that date.

Australia’s 2030 target remains set at the Abbott-era level of reducing emissions by 26% to 28% below 2005 levels – a stance that has attracted increasing attention from Australia’s allies and partners.

A senior US climate official, Dr Jonathan Pershing, said on Thursday that Australia’s targets were “not sufficient” and the country should be considering a 50% cut in greenhouse gas emissions by 2030, given the urgency of the climate threat.

Pulch was not so blunt in his language, but he described the coming decade as crucial and said “anything that we can do now will help us to achieve that broader objective” of net zero by mid-century.

Pressed on whether he hoped Australia and other G20 countries upgraded their 2030 targets in the lead-up to Glasgow, Pulch said: “Absolutely … I think we all have to step forward and we understand in Europe that we can actually only request that if we’re doing that ourselves.”

Pulch cited the EU’s own upgraded pledge to reduce emissions by 55% by 2030 compared with 1990 levels. “We can only achieve the next big goal if we are ready to already drastically reduce our emissions by 2030,” he said.

“We can’t expect developing countries to also contribute to this objective, if we don’t lead ourselves. The EU believes that we have to walk the walk.”

On Tuesday, the Australian prime minister, Scott Morrison, did not rule out taking a stronger 2030 target to the Glasgow summit, saying the Australian government would “make further statements” about “what Australia is achieving and what we intend to achieve”.

The prime minister has adopted a mantra of “technology not taxes” on climate policy, arguing the focus should be on achieving “game changing” technological breakthroughs.

“But at the same time, we also need to incentivise our economies … to use less carbon than they did in the past,” Pulch added.

The EU ambassador implied it was possible to do two things at once. “What we do in Europe when it gets cold in winter is we close the window and we turn on the heating,” he said.

Pulch said the EU would continue its close dialogue with Australia and would respond to any concerns about the bloc’s planned carbon border adjustment mechanism (CBAM), which he described as “one of these tools you actually don’t want to use”.

Exports to Europe of cement, iron and steel, aluminium and fertiliser face potential costs from 2026 as part of sweeping climate plans unveiled by the EU in July.

The EU will offer deductions to importers if the non-EU exporters can show they have already paid a carbon price for the production of the goods elsewhere. Australia repealed its carbon pricing scheme in 2014.

Pulch said CBAM was “not a tax” and was “not introduced to raise revenues”, but aimed to reduce emissions by encouraging less carbon-intensive production.

“We understand that Australia is concerned, as some of our other partners are, but … the direct impact on Australian exporters is actually very, very modest if you look at the four sectors that we have identified,” Pulch said.

The EU was “fully confident” the measure complied with World Trade Organization rules, because the charges would be linked to the prices European manufacturers would pay to produce the same goods in Europe.

Pulch pointed out other big manufacturing economies faced the same issue of how to level the playing field alongside stronger domestic climate policies “and therefore they are looking at a similar system”.

The Australian government has viewed the growing momentum behind such policies with concern and has set up a new grouping of officials to consider how to respond.

The Department of Foreign Affairs and Trade confirmed senior officials from eight agencies – including Austrade, Treasury and the prime minister’s department – met in May “to consider Australian government policy in relation to proposed border carbon adjustment policies”.

This committee “will continue to meet as necessary”, the spokesperson said.

‘Something’s not right’: Northern Irish townland has its 31.2C day in the sun | Northern Ireland

World ‘must step up preparations for extreme heat’ | Climate change 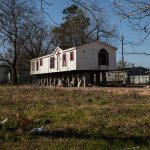 The ‘Old American Dream,’ a Trap As the Floods Keep Coming