Big super funds have threatened to vote against company directors who do not make sure their businesses are committed to action on global heating that includes hitting net zero by 2050.

The Australian Council of Superannuation Investors (Acsi), which represents investors that manage more than $1tn in retirement savings and hold about 10% of the shares in the top 200 companies in the country, said some boards were not tackling the climate crisis quickly enough.

Its tougher stance comes after a week in which regulators and ratings agencies stepped up the pressure on corporate Australia to properly consider climate risks and the US president, Joe Biden, increased the pressure on the Australian government to commit to emissions cuts sooner.

Australian companies attempting to find new markets due to the trade war with China face a risk that Europe will impose border taxes due to the country’s high emissions. At the same time, new research by insurance group Swiss Re, released this week, estimates that Australia’s economy will take a hit of as much as 12.5% by 2050 if the globe warms by 2.6C.

Under a new climate policy, released on Monday, Acsi now expects companies to adopt and detail a corporate strategy in line with the international Paris agreement, which aims to limit heating to 1.5C, and commit to net zero emissions by 2050.

Acsi said that companies should also work out and fully disclose what physical and financial risk global heating poses to their assets, as well as making sure that their lobbying efforts – including through industry associations – do not undermine efforts to limit climate catastrophe.

It said it would also support “say on climate” resolutions, which ask companies to publicly report on their climate exposure, that are put forward by shareholders at annual meetings.

If companies consistently fail to comply with the new policy, Acsi may recommend a vote against directors when they come up for re-election at shareholder meetings.

“Our recommendations will focus on the individual directors most accountable for oversight of climate-change related risks, for example company chairs, and the chairs of the risk and sustainability committees or similar,” Acsi said in its new policy, which is effective from next year.

“I don’t like to use the word threat,” the Acsi chief executive, Louise Davidson, said. “Accountability for having proper climate strategy and proper climate focus at companies lies with directors.

“And so, we are now saying to directors ‘this is our expectation and we will hold you accountable for it’.”

She said Acsi wanted the Morrison government to set a 2050 emissions target consistent with the Paris agreement that also included milestones along the way, but companies needed to act even if the government failed to do so.

“In a way it doesn’t matter from an investment risk perspective, what happens from an Australian regulation perspective, it’s what happens globally now that matters and there’s huge momentum, particularly since the change of administration in the US,” she said.

“Carbon trade tariffs are an impending risk for companies, and the other issue is capital movement.

“If companies don’t have their house in order on climate, and a clear strategic path to being a successful operation in a low-carbon environment, where’s the investment going to come from?”

She said the rapid pace of change internationally meant companies with strong climate policies could not rest on their laurels.

“I just think things are moving very quickly and so even if you are doing a good job now, that might not seem such a good job in a year,” she said.

“The world’s going to move without us. And so it’s really important for Australian companies that are globally exposed to be on that train, you know. We can’t sit around saying, well we haven’t got regulation, we need policy … all of those things would be helpful, but the world is moving on.”

Last week, the Australian Prudential Regulation Authority issued new draft guidance calling on the boards of banks and super funds to properly identify and mitigate climate risks – a stance that will put it on a collision course with some members of the government who have already opposed the regulator taking any action over climate.

Emma Herd, the CEO of the Investor Group on Climate Change, a group that represents funds with more than $2tn under management, said Apra’s move was critical and “will go a long way to consolidating accelerating action across the financial sector to address the systemic financial risks created by climate change”.

Ratings agency Moody’s also poured pressure on the finance sector, saying in a note that the industry was under financial and regulatory pressure to take account of climate in making lending decisions – something Australian banks NAB and ANZ already claim to do.

“Lenders that are slow to adapt will face more pressure on their credit strength,” the Moody’s analyst Alberto Postigo said.

In February, ANZ stopped lending to Australia’s biggest coal port, the Port of Newcastle, as a result of its climate policies. It was replaced in the syndicate financing the port by NAB.

According to Swiss Re’s research, global gross domestic product will be lower by as much as 13.9% compared to a baseline projection if the world heats by 2.6C, which is considered at the top end of likely warming.

It will take a hit of between 0.5% and 4.2% if the Paris target is achieved, the insurer said. 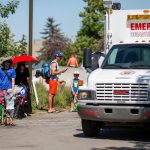 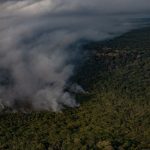