Appearance: Snow, but make it red.

Age: The sang de glacier or glacier blood phenomenon, in which alpine snow turns pink in the spring, has been observed for centuries. Aristotle believed it to be the work of “red and hairy worms” under the snow.

Please can Aristotle be right! Was he? About many things, but not this one. Quite wrong, in fact.

So what does cause glacier blood? Also known as watermelon snow incidentally. Blooms of algae. They change colour to protect themselves from ultraviolet light.

Kind of like slapping on the factor 50, but for algae? Actually, yes.

And we’re talking about this because we’re getting into summer so presumably it’s going on now? Well, yes, but French scientists are noticing a long-term rise in it.

I think I know where this is going. Afraid so. They think it could be down to accelerating global heating. The preliminary findings have just been published in Frontiers in Plant Science.

Must have missed that issue. In short, Eric Maréchal …

Eric Maréchal, head of a plant physiology lab at Grenoble Alpes University? That Eric Maréchal, yes, who is also leading this research. He and other experts have been taking samples from soil at different altitudes to study their DNA and make a snow bloom map.

And what makes them think it shows evidence of global heating? Algae live off carbon dioxide; a rise in CO2 levels could be why they’re thriving. Also, similar phenomena, such as algae blooms in lakes, can be linked to human activity. And people who live in the mountains are now seeing it every year, which they never used to.

Presumably it’s the subject of Blood Glacier? Do you mean Blutgletscher, the 2013 Austrian horror movie directed by Marvin Kren? Actually there are parallels, in that the film centres on scientists studying the climate crisis in the Alps, and they, too, discover a strange red liquid on a glacier. But this one has a very strange effect on the local wildlife …

Spoiler alert! Stop, I already want to see it! Rentable, you can find out where yourself.

The real thing’s not so dangerous though? Well actually, because it doesn’t reflect the sun’s rays well, the increase in algae could cause the snow to heat up more quickly, hastening the shrinking and melting of glaciers and snow caps.

Oh, go on, find something positive to end on. They’ve found molecules of one of these algae are full of antioxidants, so there may be something for the health sector, before it all melts.

Do say: “Act now. Because there is no planet B.”

Don’t say: “Pink snow! Cool. I think it will go well with my lime salopettes at Verbier next year.” 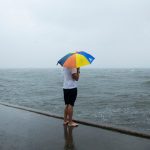