California leaders have announced a $536m plan to address the growing threat of wildfires across the state, as a drought threatens to bring on yet another destructive, deadly fire season.

The state’s governor, Gavin Newsom, along with the state’s senate and assembly leaders announced the new plan at a news conference Thursday near Shaver Lake – a small town at the foothills of California’s Sierra Nevada mountains that was devastated by the Creek fire last fall.

Last year, the state saw one of the worst fire seasons on record; four of the five largest fires in state history scorched the state, even as it was reeling from the coronavirus pandemic. Nearly 4m acres burned, 31 people were killed and more than 10,000 buildings were destroyed or damaged.

The new plan will include more than $350m in funds to improve forest management efforts and thin out fire-fueling vegetation. An additional $25m will fund grants to help homeowners make their properties more fire-resistant.

Newsom also referenced the importance of embracing prescribed burning techniques, which were practiced by California tribes for centuries before European settlers banned and eschewed the practice. Fire is a natural and necessary part of the state’s natural landscape, but for years, rather than embracing beneficial fires, California suppressed it. A build-up of overgrowth and vegetation has helped fuel extreme mega-blazes. The Karuk Tribe, wildfire researchers, and environmental groups have been pushing the governor and state leaders to fund and elevate historic forest management practices.

“I can’t make up for 50 years,” Newsom said, but committed to changing course going forward.

Newsom was bracketed by a red state firetruck and yellow-uniformed members of the California Conservation Corps working behind him as he spoke outdoors from a podium set up before an area of thinned trees. He said lawmakers “wanted to move forward more aggressively” to allocate funds that will “get these projects moving … so we’re prepared for this upcoming wildfire season”.

Earlier this month, the governor used his emergency powers to authorize nearly $81m to hire nearly 1,400 additional firefighters. He said the firefighting and mitigation efforts are in addition to the state’s many long-term efforts to fight climate change. 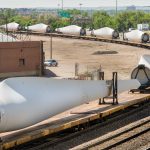 We Have an Infrastructure Plan