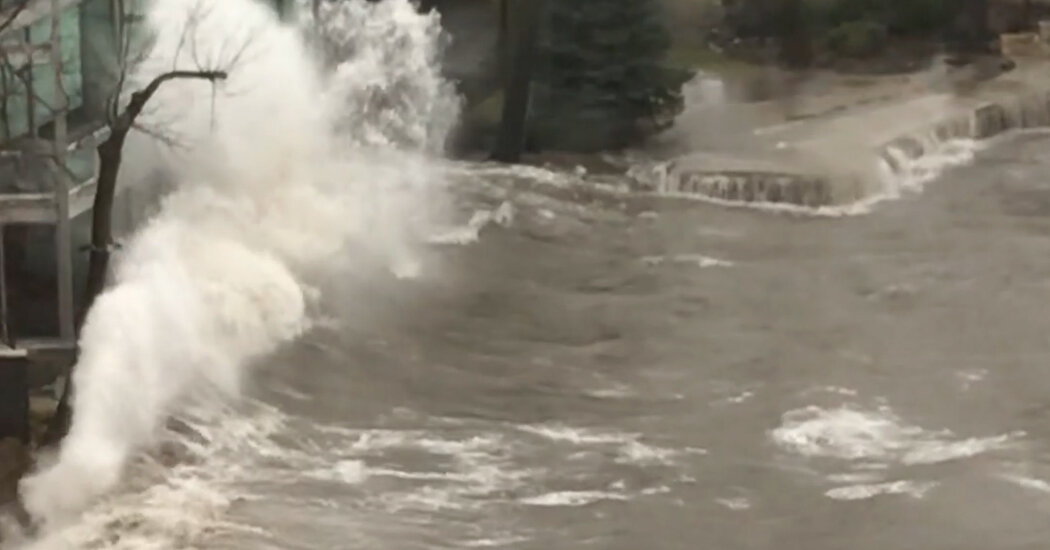 Chicago has picked up a lot of nicknames over the past two centuries that have stuck with varying degrees of success. The Windy City. The Second City. The City of Big Shoulders.

But a lesser-known sobriquet that might have the most staying power as we head deeper into a century of climate chaos is Chicago’s first: Mud City.

It comes from the fact that the city grew up on a swamp sandwiched between Lake Michigan on the east and the Mississippi-bound Des Plaines River on the west. Native Americans and European traders found the place better than any to lug and tug their canoes between the Mississippi and Great Lakes. It was a natural crossroads.

Chicagoans eventually blasted a rail-straight canal between the two watersheds, allowing commercial vessels to float all the way from New York City Harbor to the Gulf of Mexico.

The swamp was drained and paved along the way, but Chicagoans have been hustling ever since to keep dry. First, they raised the downtown area by as much as eight feet. Later, they reversed the flow of the river so all the human and industrial waste it carried flowed out of Lake Michigan (the city’s source of drinking water) instead of into it.

This did wonders for Lake Michigan water quality, but it didn’t stop the chronic flooding that has plagued the city from the start. Still, Chicagoland has managed well enough over the past century that today more than nine million people call the place home, and their feet are usually dry.

But what about the next 100 years? The city’s drainage system depends on the relatively steady level of Lake Michigan, and there are signs that climate change is leading to unprecedented swings.

The lake hit a record low in 2013, so low it was in danger of not being able to feed the river that carries the wastewater out of town. But by 2020 the lake level was more than six feet higher. Two or three feet more could have unleashed havoc downtown, and beyond.

The question now: will these opposing forces balance each other out?

Or will Mud City make a comeback?

European officials on Wednesday introduced a package of ambitious legislation designed to wean one of the world’s biggest and most polluting economies off fossil fuels far more quickly than other nations have pledged to do. The proposals include:

“Our current fossil fuel economy has reached its limit,” the president of the European Commission, Ursula von der Leyen, said at a news conference in Brussels.

Unlike pledges by many other countries to reduce their greenhouse gas emissions to net zero, or not adding more carbon pollution to the atmosphere than can be removed, by midcentury, these proposed laws create a concrete blueprint on how to get there. There’s sure to be many months of political wrangling among the 27 nations in the bloc and in the European Parliament. One key obstacle is to address inequity, and European officials repeatedly said they would create a “social fund” to help struggling households and small businesses.

The heat is devastating marine wildlife

Seashores and rivers are often favorite places for humans to keep cool in the summer heat. But for a staggering number of animals this summer, they’ve been the opposite.

A mass die-off along the Pacific Coast — more than a billion shellfish and other animals killed, by an early estimate — underscores the effects of human-caused climate change on other species. And scientists say warm rivers farther inland could be deadly to some kinds of salmon.

Quotable: “I want to find the positives and there are some, but it’s pretty overwhelming right now. Because if we become too depressed or too overwhelmed, we won’t keep trying. And we need to keep trying.” — Christopher Harley, a marine biologist at the University of British Columbia.

Scientists at the Environmental Protection Agency raised grave concerns in 2011 over three new chemicals proposed for use in oil and gas fracking: They could break down into toxic substances known as PFAS, they said, and pose a threat to people and wildlife.

But the agency approved those chemicals anyway, according to documents we reviewed, among the first public indications that PFAS — long-lasting, toxic compounds known as “forever chemicals” — can end up in the ground as a result of drilling and fracking.

For more, read our investigation.

Why it matters: PFAS have been linked to cancer, birth defects, and other serious health problems.

By Aatish Bhatia and Winston Choi-Schagrin

Days have been hot in much of the United States recently, but nights have been setting even more records. It’s part of a dangerous global trend that’s being fueled by climate change.

Unusually hot summer nights can lead to a significant number of deaths, according to climate scientists and environmental epidemiologists, because they take away people’s ability to cool down from the day’s heat.

Typically, that cooling would happen while sleeping, when body temperature naturally dips. After a hot day, “it’s really important that people have an opportunity to bring their core body temperature down,” said Kristie Ebi, an environmental health scientist at the University of Washington. “When it’s really hot at night, you don’t have that relief and it puts more physiological strain on your body.”

Heat waves are particularly deadly when the temperature rises suddenly. To find out why, you can read more here.