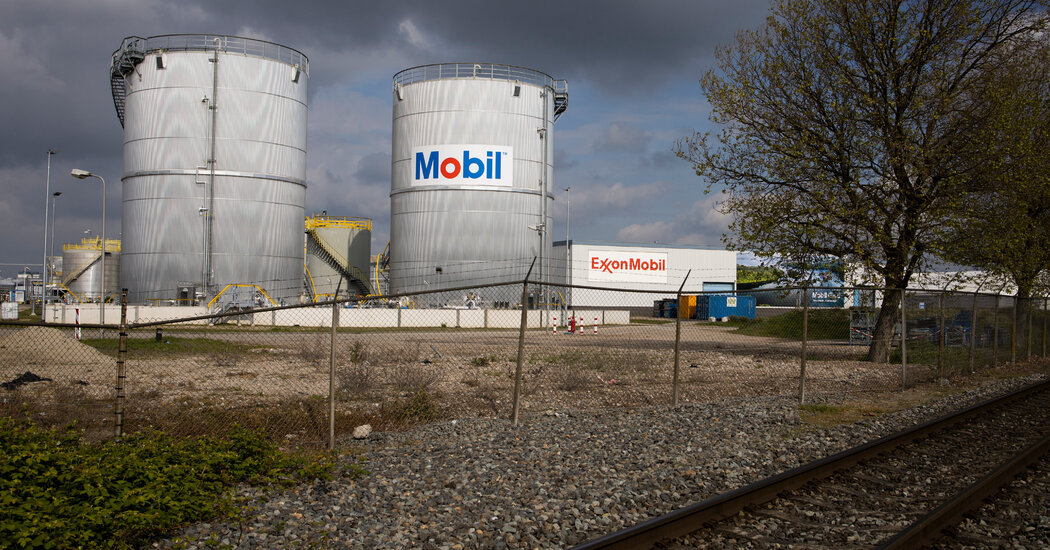 HOUSTON — Big Oil was dealt a stunning defeat on Wednesday when shareholders of Exxon Mobil elected at least two board candidates nominated by activist investors who pledged to steer the company toward cleaner energy and away from oil and gas.

The success of the campaign, led by a tiny hedge fund against the nation’s largest oil company, could force the energy industry to confront climate change and embolden Wall Street investment firms that are prioritizing the issue. Analysts could not recall another time that Exxon management had lost a vote against company-picked directors.

“This is a landmark moment for Exxon and for the industry,” said Andrew Logan, a senior director at Ceres, a nonprofit investor network that pushes corporations to take climate change seriously. “How the industry chooses to respond to this clear signal will determine which companies thrive through the coming transition and which wither.”

The vote reveals the growing power of giant Wall Street firms that manage the 401(k)s and other investments of individuals and businesses to press C.E.O.s to pursue environmental and social goals. Some of these firms are run by executives who say they see climate change as a major threat to the economy and the planet.

BlackRock backed three of four candidates nominated by the activists. The vote was not fully tabulated at the end of Wednesday, and there were still two seats undecided on the 12-person board. Eight of the people Exxon’s management nominated won seats.

The victory of the hedge fund leading this campaign, Engine No. 1, was a sharp rebuke to Darren W. Woods, Exxon’s chairman and chief executive. It is the culmination of years of efforts by activists to force the oil giant to change its environmental policies and approach. Some big pension funds, including the New York State Common Retirement Fund and the California Public Employees’ Retirement System, had joined Engine No. 1, which was started just last year.

Engine No. 1, which owns less than 1 percent of Exxon’s stock, began its campaign last December. But its victory has long been in the making. Over the last decade, European oil companies have increasingly invested in wind, solar and other new energy sources like hydrogen fuel cells, which produce water vapor instead of carbon dioxide and other greenhouse gases.

In another sign of change, shareholders of Chevron, the second-largest U.S. oil company, on Wednesday voted for a proposal to reduce emissions from the use of the fuel the company makes and sells to drivers and other customers. And in the Netherlands, a court required Royal Dutch Shell to reduce its emissions of planet-warming gases by 45 percent by the end of 2030 compared with 2019; the ruling applies only in Shell’s home country.

Exxon and other major American oil companies have strongly resisted taking the same approach as European oil companies, viewing renewable energy as a money loser that they have little expertise in. Exxon has invested heavily in recent years in deepwater exploration off the coast of Guyana and in shale drilling in the Permian Basin of West Texas and New Mexico.

Based near Dallas, Exxon has long been the oil industry’s leader, although until recently it was slow to invest in lucrative oil and gas shale fields. It has also made several losing investments, including oil sands in Canada. Poor returns have heaped pressure on the company’s management to retool its businesses.

In recent months Exxon has tried to head off the dissident investors, which have at times included some descendants of John D. Rockefeller, who founded Standard Oil, the predecessor to Exxon, by announcing new investments in capturing carbon from industrial plants and storing it deep underground for perpetuity.

The loss of at least two seats on its board will almost surely energize activists to pressure Exxon, other oil companies and businesses in various industries that they believe are not doing enough to address climate change.

Gregory Goff, former chief executive of Andeavor, a refiner, and Kaisa Hietala, an environmental scientist and former executive at Neste, a Finnish energy company that produces biofuels, were Engine No. 1’s two nominees who were declared winners.

One other Engine No. 1 nominee, Alexander Karsner, a senior strategist at X, a division of the Google parent company Alphabet, could win one of the remaining seats, according to Exxon.

The company said the final results would not be publicly available Wednesday, and an independent inspector will determine the timing of an announcement.

Big investment firms have generally taken a cautious and gradual approach when pushing companies to change. The huge mutual funds that track stock indexes have to invest in big oil companies because they are included in indexes. And some investors have been reluctant to interfere too much in how businesses are run. But as climate change has become more of a threat, investment firms recognize that savers may not want their money invested in companies that profit from fossil fuels. Some analysts believe the largest investment firms will now be more likely to intervene.

“This signals a new era for the role of corporations in climate change and a new era for corporate governance,” said Erik Gordon, a University of Michigan business professor.

Engine No. 1 and its allies had argued that Exxon’s stance on climate change and the oil and gas business was not just bad for the planet but that it would hurt the company’s profits in the future as governments required businesses to reduce and eventually eliminate emissions of greenhouse gases. And the majority of the company’s shareholders appeared to at least partly agree with that position.

“This isn’t really about ideology, it’s about economics,” Chris James, founder of Engine No. 1, said in an interview. “And economics is what has driven the adoption of some of the alternative fuel sources versus fossil fuels. We want there to be an acceptance of change.”

Corporate boards oversee and advise management on big decisions. Though outnumbered, the new Engine No. 1 directors have an important foothold in Exxon’s boardroom and can try to influence the company’s strategy, particularly when it comes to reducing its reliance on fossil fuels.

Liz Gordon, executive director of corporate governance at the New York State Common Retirement Fund, which holds about eight million Exxon shares, said that her office had engaged with Exxon for years on climate. “But the engagements have really been frustrating,” she said. That makes today’s vote “a historic breakthrough that sends a clear message to Exxon that it needs to change the way it does business,” she added.

In an explanation of its vote, BlackRock said that “demand for fossil fuels may decline rapidly in the coming decades” and that could hurt the returns of Exxon’s shareholders.

Exxon has said that it does not make sense for it to change its focus toward renewables and that it is addressing climate change via capturing carbon, including a proposed $100 billion project to collect the greenhouse gas from industrial facilities along the Houston Ship Channel.

“We welcome the new directors,” Mr. Woods said at the meeting. “While there is still more to do, we are proud of the progress we have made to reduce emissions and clear plans for further reductions.”

The company’s share price jumped after the preliminary results were announced and finished the day up 1.2 percent.

Charlie Penner, Engine No. 1’s head of active engagement, said the vote was the beginning of a long road of change for the company. “This is going to mean years of making more good decisions than bad ones,” he said. “You have to begin bending the trajectory, we think.”

Shareholders also voted to approve two proposals that Exxon management opposed. One proposed by the United Steelworkers union requires the company to report all lobbying expenditures. The other, offered by BNP Paribas Asset Management, requires the board to report how the company’s lobbying of lawmakers aligns with the goals of the Paris climate agreement.

As late as this week, Exxon was trying to persuade shareholders not to vote with the activists. The company said on Monday that it would add two new directors to the board later this year, including a climate expert.

Environmentalists said they believed the vote would bolster the work of big investment firms that are pushing companies on climate change.

“This moment is not just about Exxon Mobil,” said Fred Krupp, president of the Environmental Defense Fund. “It is about major asset managers and other influential investors stepping up, making their voices heard and walking the walk, connecting the dots between their climate rhetoric and their actions.”

‘This is it. If we don’t amp up, we’re goners’: the last chance to confront the climate crisis? | Climate change