No one seems as defeated as the global warming “deniers” who dominated rightwing thinking a decade ago. Like late 18th-century opponents of abolishing the slave trade, Lord Lawson and the claque of Conservative cranks who filled the comment pages of the Tory press are remembered today as dangerous fools – assuming they are remembered at all.

The billions of dollars spent by the fossil fuel industry on propaganda and its acceptance by know-nothing elements on the right caused incalculable damage. They might have followed Margaret Thatcher, who warned in 1989 of C02 admissions leading to climate change “more fundamental and more widespread than anything we have known”. The desire of business to protect profits and the vanity of politicians and pundits, who saw themselves as dissidents fighting the consensus rather than fanatics enabling destruction, helped to waste two decades of valuable time.

Every argument they advanced has been disproved, as much by the experience of everyday life as science. Journalists are advised: “If someone says it is raining and another person says it’s dry, it’s not your job to quote them both. Your job is to look out the window and find out which is true.” The world only had to look at the weather outside to know who was trying to fool it.

To pick from the dozens of examples in Richard Black’s history of the conspiracy theory (Denied: The Rise and Fall of Climate Contrarianism) , global warming is not a “swindle”, as a Channel 4 documentary informed its viewers in 2007. Glaciers and ice sheets are shrinking and the seas are becoming more acidic. If there was swindling, it was at Channel 4, as Ofcom suggested when it found the station guilty of several breaches of the broadcasting rules. It is not “erroneous” to assume that humanity is driving the climate catastrophe, as the Spectator assured its readers as late as 2017. The pace of man-made climate change is faster than anything in the Earth’s history and all attempts to invent other explanations have failed.

Viscount Ridley, who presided over the collapse of Northern Rock, and now dismisses the collapse of the planet in the pages of the Times, said climate change was doing “more good than harm”. We should adapt to a warmer Earth and celebrate the reduction in deaths from the winter cold. But the seas and icecaps cannot adapt, nor can cities threatened with flooding and countries facing desertification. The lights did not go out as we switched to renewable energy, as so many pundits said they would. And energy bills have fallen rather than risen, despite the assertions of the noble Lawson to the contrary. Rightwing denialism appears buried so deep in the dustbin of history it can never be recycled.

And yet there is nervousness among the impressively large number of Conservative politicians who are serious about pushing for net zero. They are pleading with their colleagues to understand the advantages to consumers and businesses that a determined remaking of the economy would bring. The Conservative Environmental Network is already in a fight with a small group of rightwing MPs, who claim “the poorest will pay the highest price for net-zero fantasies” (even though no measure is more likely to reduce fuel poverty than a government home-insulation drive). That battle will only intensify.

I put “denier” in quotes at the top of this piece because the enemies of science (and of us all) are endlessly malleable shapeshifters. Once they can no longer deny the existence of man-made global warming, they shift and keet on shifting so no one can ever pin them down. In this, they mirror the defenders of slavery 230 years ago, who created the modern world’s first corporate PR campaign and provided an example for all who have followed.

The comparison isn’t harsh. One day, the attack on climate science will be seen as shocking as the defence of human bondage. Indeed, that day should have long passed. They are overwhelmingly old men or, in the case of Lawson, a very old man. They grew up in a 20th century where the carbon economy was natural: the way the world was and would always be. Slavery was equally natural to the plantation owners and slave traders of Georgian Britain. It had always existed, everywhere on Earth.

The 18th century had its Viscount Ridleys who opined that slavery did more good than harm. In 1789, during the hearings for the first abolition bill in history, one witness told parliament that Africans wanted to be enslaved and “nine out of 10 rejoice at falling into our hands”. The pro-slavery lobby was as well funded as the fossil-fuel lobby, and as relentless. The Telegraph comment pages did not exist in 1789 so it commissioned The Benevolent Planters by one Thomas Bellamy to appear at the Theatre Royal in London’s West End. The play told the story of Oran and Selima, lovers who are separated in Africa. Their capture by slavers is a blessing. Far from being oppressors, kind slave owners bring the couple together in the West Indies and allow them to live productive lives together.

William Wilberforce was assailed by claims that if Britain abolished slavery, “our manufactures will droop in consequence, our land-tax will be raised, our marine destroyed, while France, our natural enemy and rival, will strengthen herself by our weakness”. Today, Nick Timothy, the man who destroyed Theresa May’s premiership, tells Telegraph readers the British will be forced into penury by “net-zero zealots” while other countries “break their promises” and profit from our naivety.

In the 18th and 21st centuries, as soon as one fake position was exposed, another took its place. The arguments change. The intent remains the same.

It remains an open question as to whether Boris Johnson secretly shares a denialist intent. Conservative environmentalists look on him with approval as he prepares to host the Cop26 climate change conference in November. He says all the right things, but the investment and political will needed to electrify transport, reduce meat eating and refit the housing stock are nowhere to be seen. Denialism is a shapeshifter. Its latest form may be a bombastic prime minister who promises the Earth but does next to nothing to protect it. 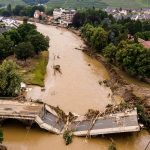 What We Know About the Climate Connection to the European Floods