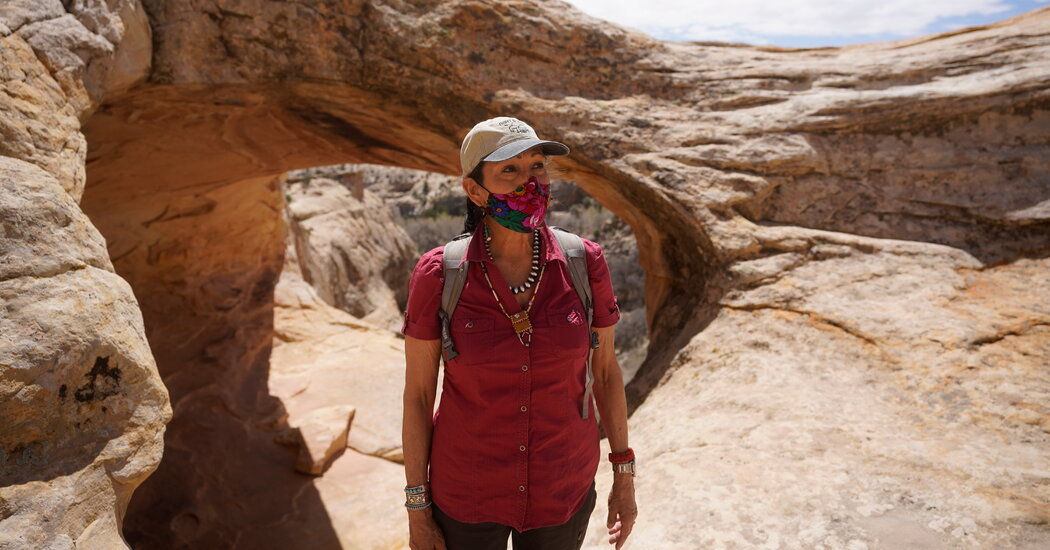 In a report sent to the White House earlier this month that has not been made public, Ms. Haaland recommended that Mr. Biden reinstate the original boundaries, which included millions of acres at Bears Ears National Monument and Grand Staircase-Escalante, two rugged and pristine expanses in Utah defined by red rock canyons, rich wildlife and archaeological treasures.

A spokeswoman for Gov. Spencer J. Cox of Utah confirmed Monday that Ms. Haaland had made the recommendations.

Mr. Trump had sharply reduced the size of both national monuments at the urging of ranchers and many Republican leaders, opening them to mining, drilling and development. At the time, it was the largest rollback of federal land protection in the nation’s history.

Mr. Trump’s 2017 decision to slash Bears Ears by nearly 85 percent alarmed paleontologists, environmentalists and Native American groups, and several filed a legal challenge that is pending in federal court. Bears Ears is rich in fossils dating back hundreds of millions of years and is an important cultural landmark for tribal nations.

Bears Ears and the Northeast Canyons and Seamounts had both been established by President Barack Obama in 2016. Grand Staircase-Escalante was created by President Bill Clinton in 1996.

Neither the White House nor the Interior Department would comment.

The recommendation by Ms. Haaland to reinstate the protections was widely expected. On his first day in office, President Biden ordered a review of the elimination of protections for the monuments to “determine whether restoration of the monument boundaries and conditions would be appropriate.”

Bears Ears is named for a pair of towering buttes that dominate much of the landscape of southeast Utah, and is the site of ancient Native cliff dwellings and sacred burial grounds. It is the ancestral homeland of five tribal nations — the Navajo Nation, Hopi Tribe, Ute Indian Tribe, Ute Mountain Ute Tribe and Pueblo of Zuni.

Environmentalists applauded the recommendation from Ms. Haaland, although they noted Mr. Biden has yet to make a final decision.

“We welcome this news after years of litigation aimed at restoring the much needed protections for these lands and waters,” said Dan Hartinger, director of government relations for The Wilderness Society. “Secretary Haaland received input from near and far about the importance of restoring protections and there is no doubt she heard overwhelming support that led to her recommendations. We now must see the president act based on the facts and not be side tracked by those who have failed to identify any other viable path forward.”

The recommendation to restore the boundaries of the monuments comes on the heels of the G7 meeting in the United Kingdom, where Mr. Biden and leaders of the six other wealthiest nations committed to conserving 30 percent of the world’s lands and waters.

Mr. Cox, the Republican governor of Utah, said in a statement that he was disappointed. “I think there’s a better way, and I look forward to talking with the president about how to find a lasting solution that’s better for the land and everyone involved,” he said, echoing the concerns of several Utah lawmakers that designation of

But there are also some political risks in any decision by Mr. Biden to restore the original borders of the monuments. Senator Mitt Romney, the Utah Republican, has said that he doesn’t want any president to determine the footprints of Bears Ears and Grand Staircase-Escalante, but rather that the borders should be determined by Congress. He is also a key member of a bipartisan group negotiating with the White House to win passage of a major infrastructure bill that is a legislative priority for Mr. Biden.

The rest of Utah’s congressional delegation released a statement Monday urging Mr. Biden not to use his executive authority to change the dimensions of the monuments.

“We reiterate our request that the president publicly release the secretary’s report recommendations and meet with our delegation before making a final decision on the monuments’ boundaries,” the lawmakers wrote. “We also urge the administration to work with our delegation, as well as with state, local, and tribal leaders, to craft a permanent, legislative solution, which we believe is the only path to resolving this longstanding issue and providing much needed certainty to our communities.”

Ms. Haaland, the country’s first Native American cabinet secretary, is a member of the Laguna Pueblo. She now leads the federal agency that for much of the nation’s history played a central role in the dislocation and abuse of Indigenous communities from coast to coast, and she has made Native American issues a top priority at the department.

In a 2019 interview with The Guardian, Ms. Haaland described a recent camping trip she had taken to Bears Ears. “There are some pretty amazing ruins there, and you know, I don’t even like to call them ruins, because in our culture, in Pueblo culture, if you acknowledge our ancestors, they are there,” she said. “The spirit of the people never leaves.”

In April, Ms. Haaland visited Bears Ears and Grand Staircase, where she hiked and met with Republican leaders including Mr. Cox, as well as tribal leaders who urged restoration of the monument. Some tribal groups have also lobbied Mr. Biden to expand Bears Ears beyond the boundaries drawn by the Obama administration.

In Karachi, hot weather is normal … but 44C feels like you’re going to die | Talaiha Chugtai