The UK’s competition authority has called for the government to intervene in the electric car charger market to prevent “charging deserts” and increase availability in locations outside London, which remain underserved.

The Competition and Markets Authority (CMA) also said it had opened an investigation into the dominance of one provider, Electric Highway, in the fast-charging network at motorway service stations.

Electric cars are a crucial part of the UK’s plan to reach net zero carbon emissions by 2050 as part of its effort to alleviate the climate crisis, and the government announced in 2020 that sales of new petrol and diesel cars would be banned by 2030.

However, the industry has long argued that much more public investment is needed to solve a chicken and egg problem: some consumers are put off from buying an electric car because of poor charger availability but charger companies are unwilling to invest until enough consumers have bought them.

However, a study by the regulator published on Friday suggested Britons faced a “postcode lottery” for access to public chargers. Outside London there are only 1,000 on-street chargers across the whole of the UK, while within the capital there are 4,700.

The CMA said the government needed to accelerate investment in rapid-charging networks, provide more funding and support to local authorities to invest in charger networks, and make it easier and cheaper for companies to connect new chargers to the electricity grid. The government should also consider targeting extra funding off the motorway in more remote locations, the regulator said.

It also expressed serious concerns about the dominance of Electric Highway, a subsidiary of the private energy company Gridserve, in the provision of the motorway fast-charger network. Electric Highway has exclusivity agreements with Roadchef, Moto and Extra, motorway services providers who cover about two-thirds of UK motorway service stations.

“We are concerned that these arrangements increase barriers to entry for other chargepoint operators,” the CMA said, adding that they risked undermining the government’s £950m rapid charging fund, which invests in the infrastructure for chargers on busy routes.

It is “far from clear” that exclusivity deals are still necessary, and other providers have said they are unable to compete on motorway provision, the CMA said. It said the government should insist on open competition when awarding new grants.

Andrea Coscelli, the chief executive of the CMA, said: “Electric vehicles play a critical role in meeting net zero but the challenges with creating an entirely new charging network should not be underestimated. Some areas of the rollout are going well and the UK’s network is growing – but it’s clear that other parts, like charging at motorway service stations and on-street, have much bigger hurdles to overcome.

“There needs to be action now to address the postcode lottery in electric vehicle charging as we approach the ban on sales of new petrol and diesel cars by 2030.” 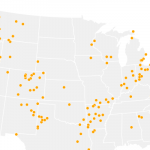 Why Record-Breaking Overnight Temperatures Are So Concerning