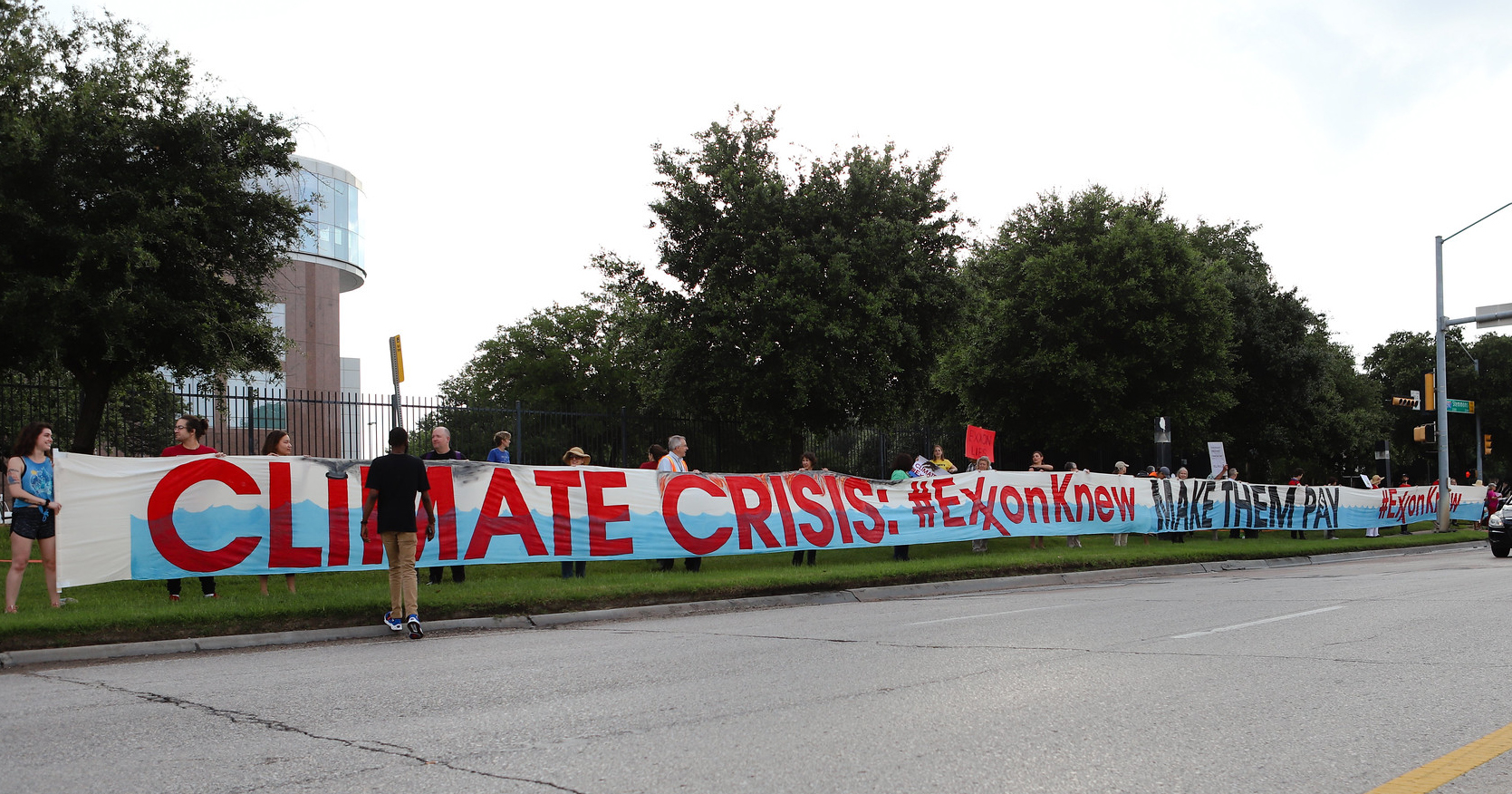 This week, ExxonMobil holds its virtual annual shareholders’ meeting—in the spotlight, because the company is in a proxy fight! As I have every year since 2016, I’ll be attending ExxonMobil’s annual meeting as a representative of a climate-conscious shareholder. And the Union of Concerned Scientists is urging BlackRock, Vanguard, state treasurers, and other major investors to vote for climate-critical shareholder proposals and against laggard corporate leadership at ExxonMobil. Here are four reasons why.

What is a proxy fight?

First, let’s set the scene. ExxonMobil has been on its back foot since December, when activist investor Engine No. 1 declared that it wanted to shake things up at the company and replace four board members. Engine No. 1 has called for the establishment of an emissions reduction target that includes Scopes 1, 2, and 3. In January, ExxonMobil for the first time reported its Scope 3 emissions—which come from burning its oil and gas products and account for roughly 90 percent of the company’s total emissions. Yet the company omitted Scope 3 emissions—which in 2019 were about equal to all of Canada’s global warming emissions—from its (underwhelming) five-year emissions reduction plan.

Three major public pension funds—the California State Teachers Retirement System, California Public Employees Retirement System, and the New York State Common Retirement Fund—have announced they will vote for the Engine No. 1 slate over the objections of ExxonMobil’s Board. Proxy advisory firms Institutional Shareholder Services and Glass Lewis have each recommended that shareholders vote for at least two of the directors put forth by Engine No. 1.

Quoting directly from Investopedia, “A proxy fight occurs when a group of shareholders in a particular company attempts to join together to effect change in a particular area of corporate governance within that company.” Shareholder activists will often go to the company with a list of items they want to change—long-term investments, risk management, etc.—that they think will be in the company’s best interest. If the company and its board are resistant to the shareholder’s ideas, the shareholder can then persuade other shareholders to join together and use their combined proxy votes (a bit like the Power Rangers, activist investors are stronger together) to change the composition of the board. The most common way to do this is to try to replace incumbent board members with candidates who are receptive to the desired changes.

Why propose new leadership for ExxonMobil?

Engine No. 1 asserts that ExxonMobil has “failed to evolve with the industry’s transition, resulting in significant underperformance to the detriment of shareholders.” In other words, by denying climate change and fighting climate progress for so long, ExxonMobil is behind the curve and shareholders are paying the price.

And there is significant evidence for that—10 years ago ExxonMobil was the top company in the Dow Jones Industrial Average, but it was kicked out in 2020 for poor performance. Total shareholder returns have lagged behind oil and gas competitors since 2013. The company had to write off nearly all of its oil sands crude (a notoriously emissions-heavy product) this year and wrote off $20 billion related to its 2009 acquisition of the shale gas company XTO last year. ExxonMobil’s credit rating was lowered for the third time since 2016 in February. But in the period between 2017 and 2019, despite negative returns and increasing debt, total CEO compensation rose almost 35 percent.

Which leads to the first reason shareholders should reject the ExxonMobil Board’s voting recommendations: as a wake-up call for the company to reward climate action by its executive leadership. Historically, the compensation structures of oil and gas companies have created an incentive for corporate executives to resist climate action (read more in this recent peer-reviewed study by Dario Kenner and Richard Heede).

That research was done before a long-awaited report by the International Energy Agency found that to bring global energy-related carbon dioxide emissions to net zero by 2050 and give the world an even chance of limiting the global temperature rise to 1.5 °C, investment in new oil and gas projects must stop now. ExxonMobil can no longer justify continuing to spend tens of billions of dollars per year on oil and gas exploration and infrastructure—and the company needs to de-link executive compensation from new oil and gas discoveries. Shareholder votes against the current Board will help accelerate the adoption of new performance metrics focused on ExxonMobil’s role in the low-carbon energy transition.

As European governments set targets toward the goal of net-zero emissions by 2050, European oil and gas majors have made headline-grabbing pledges (not yet consistent with keeping global temperature increase to 1.5 °C). Now that the US has rejoined the Paris Agreement and the Biden Administration has announced a goal of reducing US global warming emissions by between 50 and 52 percent below 2005 levels by the end of this decade, the pressure is on ExxonMobil and Chevron to step up climate action.

Disclosure is one area where US climate policies are advancing. This month, the Climate Risk Disclosure Act passed out of the US House Financial Services Committee, a critical step toward addressing the significant risks climate change poses to businesses and holding public companies accountable to their shareholders. UCS organized a sign-on letter of support for the bill signed by 82 environmental and social justice groups, faith-based and public interest organizations

The Climate Risk Disclosure Act complements the Security and Exchange Commission’s move to strengthen climate disclosures by publicly listed companies and this month’s Executive Order on Climate-Related Financial Risk, which would require all federal suppliers (including private companies) to disclose their climate-related risks.

While ExxonMobil pays lip service to the recommendations of the Task Force on Climate-related Financial Disclosures in its climate report, the company’s current leadership has not taken seriously the obligation to provide consistent, comparable, decision-useful information on how it is managing risks and opportunities related to climate change and the energy transition. Investors are demanding such information, and they now have public policy on their side.

Instead, ExxonMobil keeps trying to dupe us with greenwashing ads, such as those touting its experimental algae biofuels. This month, Harvard University researchers Geoffrey Supran and Naomi Oreskes published the first quantitative, academically peer-reviewed analysis of how ExxonMobil has used language to shape public discourse about climate change in misleading ways. The study found that ExxonMobil:

These techniques mirror those of the tobacco industry. And like the tobacco industry, ExxonMobil is facing a barrage of investigations and lawsuits over its deceptive communications to consumers and investors and the preventable harms caused by its products.

Reason 4: Be accountable for climate harms

One such lawsuit was filed in September 2020 by Connecticut Attorney General William Tong, alleging that ExxonMobil misled state consumers about the climate change impacts of its fossil fuel products. Last week, UCS delivered a letter signed by more than 50 Connecticut scientists to AG Tong expressing support for the lawsuit.

ExxonMobil is seeking to have the case—filed under Connecticut’s consumer protection laws—heard in federal court, where it expects a more favorable outcome. (The fossil fuel defendants have taken this approach with every climate lawsuit filed since 2017, delaying justice for the plaintiffs—with impacts felt most acutely in low-income communities and communities of color). In federal court last Friday, the judge did not seem to buy ExxonMobil’s argument. “You tell me where the federal government directed ExxonMobil to falsely make claims about the gasoline they sold to consumers in Connecticut,” she reportedly asked the company’s lawyer.

It is past time for ExxonMobil to take responsibility for the climate harms caused by its deception, denial, and delay. The company’s mounting legal risks weigh particularly heavily on long-term investors such as state pension funds and the firms that manage their assets.

There’s at least as much at stake at this week’s ExxonMobil annual meeting as there was in 2017, when shareholders rebelled by voting in favor of a climate-related proposal for the first time in the company’s history. The $9 trillion asset manager BlackRock, which owns more than six percent of ExxonMobil’s stock, is sharing the spotlight due to its well-publicized climate commitments.

Now is the time for BlackRock and other investors to send a powerful message to ExxonMobil that it’s too late for empty talk and incremental adjustments—ambitious, visionary transformation is necessary to help the nation and the world limit the worst effects of climate change and move decisively toward an equitable net-zero energy system.

Many thanks to my former UCS colleague Nicole Pinko for her research and first drafts of portions of this blog. We wish her the best in her new role at Climate Policy Initiative!

The week in audio: Laura Barton’s Notes on Music; The Crisis – review | Radio