Four activists have been arrested at a protest that lasted almost three days at a McDonald’s burger factory in Scunthorpe.

About 50 activists from Animal Rebellion claimed they had prevented millions of burgers from leaving the factory, and urged the fast food chain to move to a meat- and dairy-free menu by 2025 to help protect the future of the planet.

On Thursday, dozens began blockading the food distribution centre on Luneburg Way in the Lincolnshire town. They erected tall bamboo structures and shackled themselves to one another to prevent vehicles entering or leaving the plant, but were gradually removed by police using a crane, which officers abseiled down from.

“We’re here to disrupt their supply chain and send a clear message that the company need to take seriously their destructive impact on our climate and environment, as well as the deaths of billions of animals, and move to a plant-based food system,” said spokesperson Harley McDonald-Eckersall.

The site has the capacity to make up to 3m beef patties every day for distribution to McDonald’s stores across the country, Animal Rebellion said, criticising how such mass consumption of meat drives deforestation and creates vast amounts of greenhouse gases from livestock farming

Chris Noble, assistant chief constable of Humberside police, said: “We can confirm that four people have been arrested on suspicion of a number of offences, while a further nine people have now been reported for summons under section 241 of the Trades Union Act.

It comes after Animal Rebellion shut down four McDonald’s distribution centres in May to highlight the meat and dairy industry’s role in the climate and ecological emergency.

Livestock farming is one of the leading causes of deforestation and water pollution, responsible for 14.5% of global greenhouse gas emissions.

Degrees of racism: how heat is radically altering Americans’ lives before they’re even born – video | US news 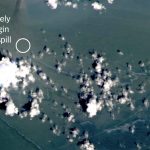