Boris Johnson is a bit of a loner, socially and politically. He doesn’t have a clear group of friends. Neither does he hail from a particular political faction. The latter probably contributes in no small part to his electoral success: it’s hard to pigeonhole him, much to the frustration of his opponents. The former is useful, too, as he doesn’t end up just appointing his mates to jobs. He doesn’t really have mates, for one thing. He’s notoriously difficult to get truly close to.

But there are obvious disadvantages to not having your own tribe. One is that you don’t automatically have people who will come out to fight for you when you find yourself in the trenches. The other is that you find it hard to notice when there is a political problem brewing in your party because you haven’t really bonded with one part of it, let alone its noisy, often stubborn, entirety.

Johnson is going to feel both of these disadvantages particularly keenly this autumn. He is heading for a stand-off with many of his backbenchers on green issues as the UK prepares to host the Cop26 UN climate summit in Glasgow. It’s not clear whether he has realised quite how widespread the worry is within his own party about the direction he is heading in on climate change policies. It’s not even clear whether he understands what the nub of the problem is.

Because he is not a tribal politician, he is not fully aware of the delineation of the groups in his party on climate. The noisiest is the “net zero scrutiny group” (NZSG), set up by Steve Baker and led by South Thanet MP Craig Mackinlay. It is easy for casual observers – including the prime minister – to assume that this is the only source of scepticism about the measures needed to reach net zero. It isn’t.

What they aren’t, according to Mackinlay, is a bunch of climate change deniers dressing up their irritation with this agenda as serious scrutiny of the policies. “What I want this group to be is a clearing house, a balanced academic facility where we get all sides of the argument. We only seem to get one argument from the climate change committee and when the serious decisions come we want to be fully armed.” Their main worries are the cost of many of the proposed measures on the lower paid, as well as the real greenness of what’s on offer. Members often cite electric vehicles as an example. “We are being skewered down the route of just battery vehicles,” explains Mackinlay. “But there are a lot of hidden costs to the planet here, not least because of the rare metals involved, which are usually produced in the Democratic Republic of Congo involving unspeakable human misery. I’m not convinced that the mining companies have got the ability to produce the volumes of these things that we need.”

One MP says: ‘We have got to be careful that we are not targeting language to address seats in south-west London’

Another member explains that, while the NZSG (not the catchiest of names, it has to be said) is signed up to the principle of climate change being a serious problem caused by humans and in need of a solution from humans, they feel political leaders are making the mistake of assuming that any solution is a good solution. “They’ve told us the ‘why’ of all this; fine, I’m signed up to net zero,” he says. “But every time someone questions whether the way of getting there is the right one, they just pivot back to the reason we need to do it, which isn’t the same thing.”

Johnson will hear a lot from the NZSG in the coming weeks. But he would be mistaken to think that they are the only constituency within the party that he needs to speak to. MPs in red wall seats are also very anxious. This bunch of MPs is represented by the Northern Research Group, which worries not just about the cost of electric vehicles, green boilers and other measures for their constituents’ homes, but also about the language ministers are using.

A fundamental mistake that the government is making is to assume that talking about “green jobs” is the way to appeal to voters in working-class, formerly Labour seats. That’s not right, according to a number of red wallers. One says: “We have been trying to relay to them for a while that they need to stop saying ‘green jobs’. Our people think it’s some kind of civil service, public sector thing. We need to make it hi-tech, high-skilled, levelling up.” Another adds: “We are all pretty supportive of this stuff but if I talk to my constituents about ‘green jobs’, they think of a council employee who goes around wasting taxpayers’ cash. But if I talk about next generation manufacturing, then people get it. We have got to be careful that we are not targeting language to address seats in south-west London. ‘Green’ does not go down well up here because it sounds naff and something that’s being imposed.”

There is also deep frustration with what NRG members see as “greenwashing” or off-shoring Britain’s carbon emissions to other countries. The fight over plans for a new coalmine in West Cumbria is one example and it exploded into a heated debate in the main WhatsApp group for Conservative MPs recently when local MP Mark Jenkinson started to question energy minister, Anne-Marie Trevelyan, about whether ministers really understood what blocking this mine would mean. Jenkinson’s position, and that of many Tories in manufacturing seats, is that the coal produced by this mine is coking coal, used to make steel, not generate dirty electricity. Britain will use coking coal whatever happens: it’s just a question of whether it imports it from Australia, thereby making another country foot the carbon emissions bill, or is more honest and produces it here at a lower cost to the planet.

Even the most fervently green group of Tories, represented by the Conservative Environment Network (CEN), isn’t fully comfortable with the direction in which Johnson and his ministers such as Alok Sharma are heading. One MP who is listed by the CEN as a “champion” of green policies privately worries that the government isn’t bothering to explain to voters why the big measures to reach net zero are necessary. “Cut me and I bleed green,” he says. “But I do have some sympathy with this; I don’t think the government is necessarily making rational choices. We are nowhere on nuclear, for instance. We haven’t rolled the pitch on so many of the changes we are going to be imposing on people and their lives. It’s green jobs all over again. People need to understand how and why the green agenda is beneficial to them and why the pain is worth it long term.”

Another “champion” is irritated that the prime minister’s wife, Carrie, an environmentalist by profession, seems to have more influence over green comms than elected MPs. But he adds: “How do you tell your boss that you think his wife is wrong and has too much power? You can’t. And that’s why so many people are making noises off about Carrie.” Other loyal MPs say that regardless of whoever is leading the comms on this matter, they are being pushed to breaking point by what they see as the “tin-eared” approach of the prime minister.

Johnson’s lack of understanding of how deep the worry runs in his party has been made much worse by the distance imposed by Covid. That he had to spend the final week of term in self-isolation meant that he missed a number of important opportunities to bond with his MPs. He was supposed to attend the 1922 Committee of Conservative backbenchers, but ended up having to speak to them over Zoom, a format he has never managed to make work for him.

Similarly, he missed end-of-term receptions in parliament, where he could have got much more of a feeling for where his MPs were emotionally. Now, as the summer starts to draw to an end, he faces being hit by a barrage of frustration when he comes back to Westminster in September. The changes he needs to make don’t even involve him dropping his green agenda. They just involve him listening to the different tribes in his party and understanding that they aren’t automatically signed up to his policies yet. Even a loner is capable of picking that up.

Isabel Hardman is assistant editor of the Spectator 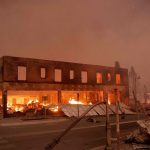 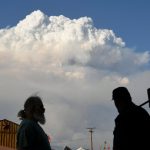 The Bootleg Fire Is Now Generating Its Own Weather