Excessive heat warnings remained in place across swathes of the western US on Monday after Death Valley in California registered what could prove to be the highest reliably recorded temperature on Earth.

Following a cascade of record heatwaves in Canada, north-west America, northern Europe and Siberia, the severity of the hot spell has underlined the dangerous impact of human-caused climate disruption and prompted scientists to consider whether computer models may have underestimated the impacts.

The US National Weather Service measured the temperature at Furnace Creek in Death Valley on Saturday at 54.4C (130F). If confirmed, this would equal the record set at the same place last year and rival slightly higher measurements made more than 100 years ago when equipment was less precise.

The heat spike was protracted as well as steep. For three days in a row, Furnace Creek sweltered in maximum temperatures of over 128F (53.3C). There was little respite at night where the lows never fell below 90F (32C).

The scorching weather affected a far wider area. Records were broken in several other Californian and Nevadan communities, including Palm Springs and Palmdale. Combined with an exceptionally severe drought, this has also provided tinderbox conditions for wildfires. In southern Oregon the Bootleg Fire, which has raged since Tuesday, has scorched 224 square miles (58,000 hectares), threatened more than 1,000 homes and prompted evacuation orders in Klamath County.

More highs were forecast elsewhere on Monday morning, prompting authorities to advise vulnerable populations such as elderly people and others with cardiovascular ailments to take extra precautions. “A dangerous heatwave will continue to affect a large part of the west through the early part of the week,” cautioned the National Weather Service.

The arrival of monsoon rains this week is expected to bring some relief, though there are also fears this could be followed by dust storms.

Nikos Christidis, a Met Office scientist with expertise in climate attribution, said studies were now under way to measure the extent of human influence, but it was a question of how much as these extreme weather events were extremely unlikely to have occurred in a world without climate change.

Without rapid emissions reductions, the chances of this happening again will increase, he said. “Our study suggests that currently this region could expect an event of this magnitude every 15 years or so on average, with that level rising to almost every year under some future scenarios.”

Daniel Swain, a climate scientist at the University of California, Los Angeles, said the flurry of broken records fitted computer projections of how the climate will behave as a result of rising human emissions in the atmosphere.

“Despite being astonishing in visceral terms, they are not surprising in scientific terms. They are very much in line with predictions about what will happen in a warming world,” he said. “There is some level of astonishment at the pace at which records have been broken in recent weeks, but in some ways what we have seen in Death Valley – an all-time reliable heat record – is less extraordinary than some of the other records we saw in Canada and the north-west, where records were exceeded by such a large margin that they left people dumbfounded.”

He said scientists were still investigating whether other human-driven climate factors may be worsening heatwaves in ways that models do not accurately represent, such as long-term droughts amplifying short-term heatwaves, or Arctic warming slowing the jet stream and causing more summer weather systems to get blocked. “These hypotheses could mean we have underestimated heatwaves in climate models. But this is still an if.”

Matthew Huber, who heads the Climate Dynamics Prediction Laboratory at Purdue University, said conjecture about these potential non-linear causes were at the cutting edge of science and were still being evaluated. But he said aridity was probably a factor.

“What’s going on in the west right now is a dry heatwave, with high pressure, clear skies and drying conditions. Just as humans sweat to cool themselves, evaporation from plants or from soils or bodies of water can be important for keeping surface temperature cool. When that evaporative cooling mechanism is overwhelmed – perhaps from a short-term precursor drought or perhaps in the long-term from aridification – one can easily expect a step increase in surface temperature.”

At dry bulb temperatures above 40C, the air is so warm that turning on a fan can make you feel hotter, said Jonathan Buzan, a Californian climate scientist based at the University of Berne. “It is disconcerting to see these events happening,” he said.

Although Death Valley and Phoenix are exceptionally dry compared with most places in the world, he said the wet bulb temperature (which combines heat and humidity) was also among the highest ever recorded in the south-west US, because the moisture in the air was unable to rise high enough to reach the altitude where it could condense and fall as rain. 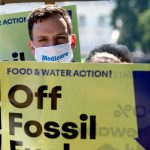 A Crucial Test Is Coming for Biden’s Climate Agenda