Lois Wessel used to work as a labor and delivery nurse in community clinics in Maryland. She remembers that every time a baby was born, she would see a beautiful little creature – and then she’d see a whole big bag full of garbage, of sheets, supplies packaging and tubing.

Shanda Demorest, also a nurse, used to work on the cardiac unit of a hospital in Minneapolis, Minnesota. She said when many of her patients were at the end of their lives, caring for them took an “astronomical and perplexing” amount of resources.

In birth, in sickness and in death, hospitals produce gigantic amounts of waste – much of which can be avoided. In the US, the healthcare sector makes up 10% of the country’s greenhouse gas emissions, according to a study in the National Library of Medicine. The global healthcare climate footprint is equivalent to the greenhouse gas emissions from 514 coal-fired power plants, according to a report by Health Care Without Harm, a global organization that advocates for ecologically sustainable healthcare practices

“If the world’s health services were a country, it would be the fifth-largest carbon emitter on the planet,” according to the organization.

Now, Wessel and Demorest are a small but growing number of healthcare workers who are improving their – and their hospitals’ – environmental footprints through sustainable practices on both small and large scales. But the pandemic – currently the main concern for the healthcare system, has brought new challenges for climate action.

Hospitals and clinics are among the top consumers of single-use plastics in the country. Medical waste is often non-recyclable and a lot of it is incinerated, releasing toxic fumes and ashes that are hazardous to public health and the environment.

Usually, nurses or assistants open all the equipment a doctor might need for a procedure: gloves, swabs, bandages, etc. Often, some of these materials are not used and have to be thrown out because they are no longer sterile. But small daily steps can make a difference. For Wessel, that means ditching the habit of having materials opened before the clinician performs a procedure.

“We’re learning not to open everything disposable until we know that we really need it,” Wessel said. This might sound like a small step but it is done several times a day, everyday, in numerous hospitals and clinics all over the world.

Other health systems have applied these strategies on a larger scale. Staff in the UK’s National Health Service Sustainable Development Unit also have worked with suppliers to design medical equipment packs instead of individually wrapped products since 2015. This reduced packaging waste by 90% (2.6 tonnes a year), according to an article published in the Nursing Times.

In 2015, the Carilion Clinics in Virginia also formally introduced a sustainability program to reduce its environmental footprint through multiple interventions.

It saved about 30,000lb of waste and $50,000 a year from a little tweak: asking patients before sending them food they didn’t want to their rooms, according to Sara Wohlford, manager of the Efficiency and Sustainability program at the clinics. That’s no small feat: it is estimated that food and catering services in the UK National Health Service produce approximately 6% of the NHS’s total emissions each year. A study of three hospitals in Italy in 2019 revealed that 41.6% of food patients received in their rooms was thrown away.

The Carilion Clinics also started to purchase reprocessed products – medical equipment that is sterilized for reuse – saving $125,000 in 2019, said Wohlford. While controlling infection in a hospital setting is paramount, equipment such as washable gowns, blood pressure pumps or pulse oximeters – which measure oxygen levels – can be reused if processed correctly, saving hospitals from tossing out tonnes of waste.

But reducing waste isn’t the only hurdle, disposing of it can be just as damaging to the environment. Generally in medical settings there are two garbage cans: medical waste that needs to be incinerated, and regular waste. Where Wessel works, the medical waste bin is red. Misplacing non-infectious materials like papers or gloves in the red bin will unnecessarily increase the amount of garbage to be incinerated, thus increasing the toxic emissions of that process.

Seeing that waste first-hand has turned medical practitioners not only into advocates, but into consultants.

When she worked as a cardiac nurse in a big hospital in Minneapolis, Demorest saw the huge amounts of waste that went into the dailies of her job. Having grown up in nature in a rural Minnesota, she had a deep attachment to the environment and always sought sustainable practices. In the summer of 2020, she left her bedside work. Now she coaches healthcare workers on sustainable solutions – from where to purchase equipment to investigating products – through Practice GreenHealth.

Sustainability can save hospitals, millions and millions of dollars in energy reduction

“Sustainability can save hospitals millions and millions of dollars in energy reduction,” said Demorest.

Health Care Without Harm has similar guides, plus presentations and tips on how nurses can talk to hospital administrations about eco-friendly practices. They highlight how interdisciplinary collaboration can help overcome bureaucratic hurdles.

Nancy Chaney is a retired nurse who has a degree in environmental sciences and a decade of experience in policy. She said part of the lag in sustainability practices is due to economics and politics. Ultimately though, she thinks there will be an implementation of these practices, out of necessity, but also because a lot of these solutions are actually cost-effective.

“We’re seeing the larger hospitals in our bigger cities take more decisive action because they magnify the cost savings,” Chaney said. “It makes sense for their bottom line as well as for the environment and the people they serve.”

In light of the pandemic, concern over the sustainability of healthcare practices has been put aside, namely because of the need for continuous ventilation, greater hospitalization capacity and disposable equipment like gloves, masks and gowns. However, the pandemic has also brought some positive changes, advocates say.

Shortage of protective equipment in the healthcare system pushed hospitals to be more stringent with its use proving that they can (and should) regulate the use of their equipment. Appointments have moved online, reducing commutes and the emissions associated with them.

Most importantly, the pandemic created a collective sense of action, according to Demorest.

At the Carilion Clinics, Wohlford said she is seeing more willingness to engage in sustainability practices.

“They want something that they feel good about,” she said. In the midst of an exhausting battle with the pandemic, small impactful practices give healthcare workers something positive to focus on. 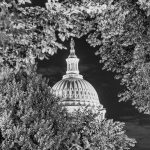 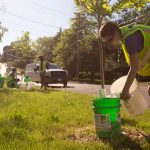 Trees Save Lives in Heat Waves. So Why Aren’t We Saving Trees?