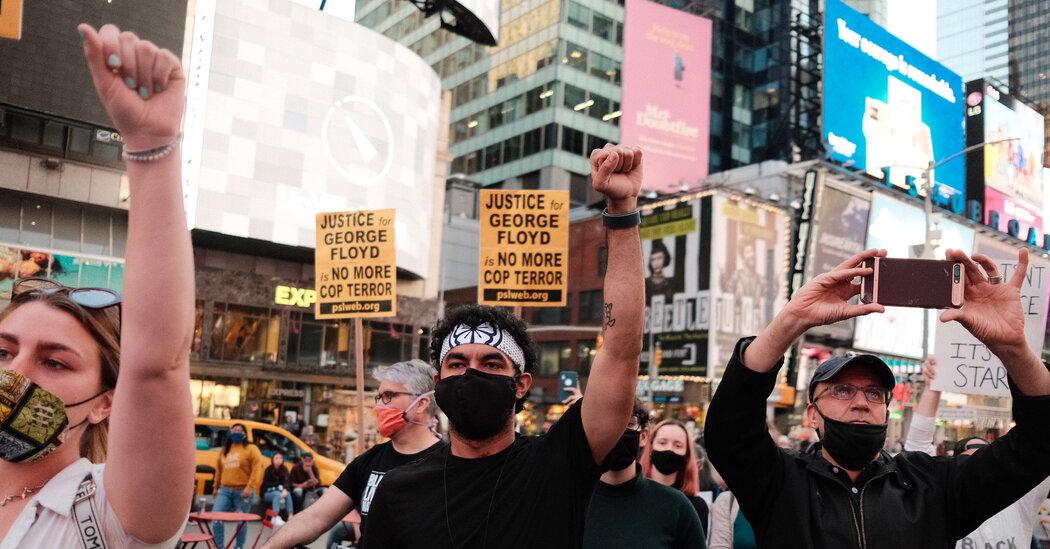 Weather: There is a chance of showers early in the day and then showers and possibly a thunderstorm after 3 p.m. Tonight will start most cloudy and then clear up.

In Times Square, people watching their phones shouted, “Guilty!” three times as the verdicts were read.

AniYa A, an author and member of the National Action Network, wiped tears from her eyes and clenched her fist in the air. “We’ve been praying for this,” she said.

A jury in Minneapolis had just found a former police officer, Derek Chauvin, guilty of murdering George Floyd, whose killing last May drew millions into the streets for the largest racial justice protests in generations. Mr. Chauvin was convicted on all three charges against him.

[This gave me a glimmer of hope,” Eric Garner’s mother said of the verdict.]

“Justice was served,” said Chris Peoples, 34, who was in Washington Square Park in Manhattan when the verdict was announced. “It’s about justice for everybody.”

He added that Mr. Chauvin’s conviction alone would not end police abuse, “but it’s a start of a change.”

Here is how other New Yorkers reacted:

‘I held off expectations’

“I feel elated,” said Gurpreet Singh, 46, who works in the neighborhood. Mr. Singh said that although the verdict would not bring Mr. Floyd back, “at least this one wrong has been righted.”

Alexandria Farrell, 30, was at Grand Army Plaza in Brooklyn with other cyclists with Mind Body Results, a group that shifted its focus from fitness to activism after Mr. Floyd’s murder.

“I held off expectations with the verdict because I have been burned in the past,” she said, adding, “It makes me feel like justice won’t always fail us.”

‘A glimmer of hope’

None of the officers who pinned Mr. Garner on a Staten Island sidewalk and placed him in a chokehold ever faced criminal charges. But on Tuesday, Mr. Garner’s mother, Gwen Carr, said that the verdict in Mr. Chauvin’s trial was “for everyone in America.”

“It was as if I was watching my son’s trial,” she said, although that case never made it to court. “But watching this, this gave me a glimmer of hope.”

Ed Mullins, president of the Sergeants Benevolent Association, a police union, said that they accepted the jury’s decision “because it was the product of the constitutional process.”

“That is all we ever ask when a police officer is accused of misconduct,” he said in a statement.

Mayor Bill de Blasio applauded the verdict, but said on Twitter that it “was not the end.”

“This is the beginning,” he said, “as we continue to create real reforms in policing and make a safer country for all Americans.”

Were His Social Media Rants Free Speech or Illegal Threats?

17 Restaurants Where New Yorkers Can Make Up for Lost Time

A hint of optimism has been added to the Climate Clock, that set of decreasing numbers on the facade of a Union Square building that was conceived to communicate the urgency of curbing carbon emissions.

Seven months ago, the artists Andrew Boyd and Gan Golan, assisted by others, redid “Metronome,” a public art project commissioned by the developers of One Union Square South and unveiled in 1999. The revised clock, instead of measuring the time of day, would measure the time remaining to reduce emissions and prevent some effects of global warming from becoming irreversible. (About seven years, the clock’s creators said.)

Now, a group working on the Climate Clock project has decided to offer a note of hope by adding to the display a second set of numbers that represents the increasing percentage of the world’s energy that comes from sources like the sun and wind.

So on Sunday afternoon, a project participant, Greg Schwedock, entered One Union Square South, ascended several flights, walked into a closet-like room and then squeezed through a two-foot-by-four-foot opening in a wall, emerging into a dusty cinder block chamber behind the digital display of “Metronome.”

[Learn more about the positive addition to Times Square’s “Metronome.”]

Communicating by Zoom with the Climate Clock’s chief technical officer, Adrian Carpenter, Mr. Schwedock made some adjustments to an electronic panel.

Then, at 4:26, he flipped a switch and a new message appeared on the display outside: “The Earth has a deadline. Let’s make it a lifeline.”

It was followed by a 10-digit display that reports the amount of the world’s energy that comes from renewable sources. It’s going up, but slowly. As of Sunday afternoon the clock was reporting the figure as just over 12 percent.

“It’s nice to have positive climate news,” Mr. Schwedock said. “That’s something that the environmental community can be proud of.”

My boyfriend and I broke up not long ago. Within days, I was in a new apartment.

Unpacking has been hard. With each box I find relics of a life that’s been tangled together like headphones in your pocket.

One morning, a friend and I went for a walk in Central Park. I told him I was feeling low and numb and generally terrible. He said that in early January he had found himself sitting at his desk crying from a feeling he couldn’t pin down.

By the time we got back to my stoop, we were both a bit of a mess, clearly fragile and talking in sentences that were not fully formed.

On the second floor of my new building there is a single balcony. Every morning, I see a middle-age woman perched there, with a beret and a cigarette. She is new to the building, too.

On this particular morning we had said hello. Now, I went inside quickly.

About an hour later, I heard a knock on my door. When I opened it, I found a plate of chocolate chip cookies arranged around a bowl of raspberries.

“Welcome #5!” said the note, with a peace sign and a Fariha Roísín poem attached. “From the girls in #3.”

For the first time in weeks, I breathed.

New York Today is published weekdays around 6 a.m. Sign up here to get it by email. You can also find it at nytoday.com.

What would you like to see more (or less) of? Email us: nytoday@nytimes.com.