Joe Biden wants to cut US emissions in half from their 2005 levels. However, since emissions have been slowly declining since then, this amounts to only a 37% drop from 2020 levels.

That, in a nutshell, is the issue. Our leaders are adhering to a template that doesn’t meet the urgency of the moment. The US is not even the world’s largest emitter any more, and China – the biggest polluter – seeks to build more coal-fired power plants, failing to reach carbon neutrality until 2060. Unfortunately, that is a perfect illustration of just how disconnected we are from the gravity of the situation.

We’re in a climate emergency, but we still have time to limit the pain. The policy choices, corporate actions and overall responses from the global community over the next 10 years will dictate whether we sink or swim as carbon emissions spark rising sea levels and extreme weather events. But, so long as we continue to use the Paris agreement as the benchmark for success, we will fail to make enough progress in time.

Paris was supposed to be a starting point, not the end goal. It was an unprecedented effort to bring the world’s countries together, acknowledge a glaring and neglected problem, and set preliminary goals for substantive action. But it lacked teeth and ambition. The accords call for limiting warming to 1.5–2.0C, but significant climate disasters are already occurring at ~1C warming.

Over the past five years, most countries have failed to make headway on reaching their individual commitments to the agreement. The US retreated from the issue, China ramped up its pollution, and only Morocco and the Gambia have been identified as being on track to limit warming to 1.5C. In the meantime, we’ve borne witness to the five hottest years on record, unprecedented storms, sweeping wildfires, uncurbed deforestation, and approximately 167bn tons of carbon being pumped into our atmosphere.

Given all this, unsurprisingly, there is a mounting body of evidence that proves 2050 to be an inadequate target for reaching net zero emissions. In addition, we do not fully understand climatic feedback loops and potential tipping points that could be disastrous. The climate crisis is accelerating much faster than most scientists anticipated, and if we don’t immediately enact wholesale and socially just changes throughout our policies, economies, food consumption habits, and relationship to nature, we will fail.

There is a lack of appreciation around the sacrifices we have to make to survive. Spending money on infrastructure, and betting on future technologies to save us, is not enough. We must reduce overconsumption by the wealthy who have been the primary beneficiaries of fossil fuel consumption. The US government urgently needs to declare a climate emergency and immediately start phasing in a national carbon fee to make the polluters pay. This list goes on.

Biden’s messaging around climate feels aspirational – highlighting the job opportunities and promise behind realigning our society – and he’s not wrong. There are plenty of opportunities on the horizon for those bold and quick enough to seize them. But fixing our economy and providing incentives for green energy is just one piece of the puzzle.

What about agriculture? What about over-consumption and the explosion in population growth? What about the mass gutting of our natural resources? Saving the world from a climate catastrophe isn’t going to be quick or fun. It’s going to require grit and tenacity, ingenuity and commitment.

Holistic, comprehensive measures are the only way we get out of this. That’s the way you solve any complicated and massive systemic issue.

Finding the solution to this problem is the focus of the World Scientists’ Warning of a Climate Emergency report I co-authored last year. Here, we have more than 14,000 scientists from 156 nations endorsing the six steps needed to survive the climate crisis. Those steps revolve around energy (pricing carbon and swiftly phasing out fossil fuels), cutting short-lived pollutants (methane, black carbon, hydrofluorocarbons, etc), restoring and protecting natural ecosystems (forests, mangroves, wetlands, etc), shifting the world’s diet to more plant-based foods (consuming fewer animal products), transitioning to a carbon-free economy using ecological economics, and reducing the unsustainable growth in population (~200,000 a day) that will likely bring the world’s total to more than 8 billion by 2023.

This will not be easy. It will be the greatest undertaking in the history of humankind. And that’s what it’s going to take to survive and continue to thrive. 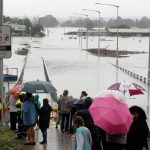