It was in the Lake District where William Wordsworth “wander’d lonely as a cloud” and the only crowd he saw was “a host of golden daffodils”.

Two centuries later, the park’s natural beauty is being eroded faster than ever before, ecologists are warning, as a result of the climate emergency and a huge influx of pandemic walkers.

Joanne Backshall, who leads the National Trust programme Fix the Fells, said natural flora along some of the park’s most famous peaks, including the Old Man of Coniston and Scafell Pike, was being rapidly destroyed after an exceptionally busy 18 months.

On some popular walks, 2 metre-wide paths have become “at least 12 metres wide,” Backshall said, as crowds have jostled for space and given others a wide berth because of social distancing. A section of pathway of only 300 metres can cost nearly £45,000 to fix, with helicopters sometimes required to drop in huge blocks of stone.

The desire of visitors to venture off the beaten track has also posed a new risk to wildlife in lesser-known parts of beauty spots, conservationists say. Social media has played a part. “Our lakes became beaches. Random waterfalls went viral on Instagram and everyone turned up,” said Tony Watson, the head of visitor services at the Lake District National Park, earlier this year.

The wear and tear of the pandemic, coupled with the increasingly severe weather caused by the climate emergency, has increased the strain on those who look after the Lake District, which attracts about 16 million tourists a year.

Fix the Fells launched 20 years ago to repair “unsightly scars” to the landscape, including 30-metre wide gullies measuring 4 metres deep. In the past two decades, a small team of rangers have tended to 400 miles’ worth of paths across the world heritage site.

The programme relies solely on donations and grants to survive as it does not receive any government funding. The National Trust said nearly £10m had been spent in the past 20 years repairing hundreds of paths and erosion scars and that another £5m was now urgently needed to protect the landscape over the next decade.

Backshall, an ecologist who manages the team of 26 rangers and 110 volunteers, said the repairs of the past two decades would be quickly undone if donations dried up. “If Fix the Fells was to stop its work altogether we would quickly revert to the sorts of erosion scars that we saw 20 years ago and it will just get worse,” she said.

The erosion is already taking its toll on local wildlife. Sediment washed off the hillside collects in lakes and rivers, reducing the breeding habitat for fish to lay their eggs. It also reduces the number and variety of plants and insects, meaning the area will attract fewer birds.

Uber and Arrival team up to produce electric taxis | Uber 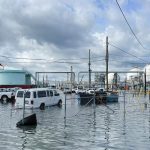