The deputy prime minister Michael McCormack has declared coal will be around for “many more years to come” as trade ministers from Australia and the UK launch a last-ditch effort to resolve lingering disputes before announcing in-principle support for a bilateral trade deal.

McCormack’s bullish comments on the future of coal on Monday follow an agreement by the G7 over the weekend to end government support for coal-fired power stations by the end of the year. Scott Morrison attended the G7 summit in Cornwall.

Morrison is now due in London for a separate program with the British prime minister Boris Johnson, with trade an important focus. The expectation is Morrison and Johnson will commit in-principle to a new bilateral free trade deal between the UK and Australia when they meet on Tuesday afternoon.

But the free trade agreement is not yet a done deal. Trade ministers are continuing efforts to resolve disputes about agriculture and labour market mobility. Dan Tehan and his British counterpart Liz Truss are due to meet again on Monday night in an effort to clear remaining obstacles.

Morrison and Tehan have been signalling consistently they will not sign a deal that contains insufficient market access for Australian producers.

On Sunday, Australia’s trade minister said it was in the interests of both countries to reach a “comprehensive deal”. But Tehan said if agreement wasn’t reached by Tuesday “we’ll take more time” because “we have to get this right”.

The climate crisis took centre stage on the final day of the G7 summit in Cornwall.

But Morrison stuck to his preferred approach of focusing on technologies such as hydrogen, rather than signing up to more ambitious medium or long-term emission reduction commitments. Over the weekend Australia signed deals with Japan and Germany to develop technology to help reach “a net zero emissions future”.

Australia’s lack of ambition is now very obviously at odds with actions being undertaken by other major developed economies ahead of the Cop26 in Glasgow late this year.

G7 countries committed to achieving “an overwhelmingly decarbonised power system in the 2030s” within their jurisdictions, and phasing out “new direct government support for international carbon-intensive fossil fuel energy as soon as possible”.

Asked about the G7 stance on Monday, the nationals leader Michael McCormack, who is the acting prime minister while Morrison is in the UK and France, told reporters the Morrison government would “do things based on what’s right for Australia”.

“We will do things based on what’s right for Australian households and factories and farms so that they don’t have to pay any more for their electricity than what they otherwise should have,” the acting prime minister said.

Even though Australia is a signatory to the Paris agreement which requires global action to limit global warming to well below 2C, preferably to 1.5C, compared to pre-industrial levels, McCormack said it was “all well and good for other countries in the world to have these outcomes and these determinations – that’s for them to decide”.

“We will decide what’s best for Australia in Australia’s national interest,” McCormack said, adding the government wanted to “make sure that we’ve got a manufacturing sector in Australia”.

McCormack said coal had “a part to play for many more years to come”. He noted export earnings from the coal industry paid for “a lot” of schools and hospitals.

“It pays for a lot of barista machines that produces the coffee that inner-city people sit and talk about the death of coal,” the acting prime minister said. 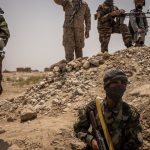 A New Breed of Crisis: War and Warming Collide in Afghanistan