In its 2021 plan, Infrastructure Australia has called on the Morrison government to provide policy certainty to kickstart investment in low-emissions technology and prevent saddling taxpayers with the cost of stranded high-emissions assets.

The plan lends weight to Josh Frydenberg’s warning that managing carbon risk is now a major preoccupation in global capital markets as the Morrison government mulls what commitments it will take to the Cop26 summit in Glasgow later this year.

While Scott Morrison has signalled an intention to achieve net zero “as soon as possible, and preferably by 2050”, he is yet to win support for the aspiration from the Nationals, who are pushing for new coal power stations under the returned deputy prime minister, Barnaby Joyce.

The Infrastructure Australia report notes that the cost of natural disasters in Australia is projected to rise from $18.2bn to $39.3bn in 2050, arguing that we must improve infrastructure resilience and reduce emissions.

The report states the infrastructure sector accounts for about 70% of Australia’s emissions. Australia will need to develop “clean exports to remain a supplier of choice and protect and create jobs” as our top trading partners – Japan, China and South Korea – have committed to net zero emissions, it said.

Infrastructure Australia noted that Australian governments had “a common aspiration to net zero emissions” but noted “there are varied commitments and targets”.

Australia currently publishes annual projections of emissions by sector, but these are not a carbon budget limiting emissions in those sectors.

Infrastructure Australia noted Morrison’s approach of “technology not taxes” to achieve emissions reduction but said it would “need an emissions profile for each sector” and “further work on planning for the withdrawal of large carbon-intensive assets”.

The report said that worldwide $17.5tn of assets were at risk of becoming stranded and investors were “reducing their exposure to commodities, assets and services that contribute to the impact of climate change”.

It noted that investors were “moving rapidly to capitalise on opportunities associated with the transition to a low-carbon future and limit their exposure to climate and carbon risk”.

Failure to set industry targets could leave Australia “with the costs of stranded emissions-intensive infrastructure”. “This will hamper global competitiveness and increase emissions while burdening users and taxpayers with avoidable costs.”

The report said that “certainty, confidence and adequacy of policy settings” help manage risk and attract investment in low-emissions technology.

“As infrastructure can operate for 40–100 years, investments made today must consider a net zero future, including investing in technology that enables it,” the report said.

Infrastructure Australia recommended that the transport sector should “be prioritised for emissions abatement” given it was the fastest-growing source of emissions.

It noted that Australia had “more expensive and carbon-intensive” vehicles than other developed countries.

“To reverse this situation, the Australian government must enact vehicle emissions standards and introduce a new carbon dioxide standard.

“In addition, current fuel efficiency standards should be revised. These standards are a low-cost, low-impact option to reduce emissions,” it said, noting this would also spur the uptake of electric vehicles.

EVs make up only 0.75% of new car sales in Australia, less than nearly all comparable countries, and it is one of the few nations without emissions or fuel efficiency standards for passenger cars.

The government announced plans for a national EV strategy in February 2019, before the last federal election. That was replaced last year with a broader approach that also covers hydrogen fuel-cell and biofuel-powered vehicles.

It has rejected introducing fuel efficiency standards, which would involve setting a target to lower the average emissions from the national vehicle fleet.

Infrastructure Australia said zero-emission vehicles were “in the best interests of users and taxpayers”, although it acknowledged work would be needed to prepare the grid for wider uptake. 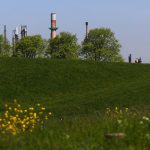 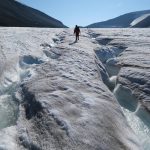 Emissions Cuts Could Halve the Impact of Melting Ice on Oceans