Shareholder activist group Market Forces has asked the corporate watchdog to investigate whether coal company New Hope misled investors by claiming that coal would “remain a significant part of the energy mix”.

In letters sent to New Hope Corporation and the Australian Securities and Investments Commission, lawyers for Market Forces claim statements by the company’s chief executive, Reinhold Schmidt, may amount to “misleading and deceptive conduct” under the Corporations Act.

In September last year Schmidt told the Australian Financial Review that “thermal coal is part of the long term energy mix, it will always be there”.

At the company’s annual general meeting the following month, Schmidt’s was asked whether he stood by that statement. He responded by referring to the International Energy Agency’s forecast “current policies” and “stated policies” scenarios.

“If you look at [those scenarios] coal will remain … a significant part of the energy mix. Australia has got a very strong benefit when compared to other coal producers; our coal is of better quality and my statements remain unchanged.”

In its letters, Market Forces says these statements omitted that the IEA had qualified its forecasts by pointing to “significant uncertainties, including more rapid action to phase out coal”.

The investor action group also alleges that New Hope – a pure-play thermal coal company – may have misled shareholders by selectively referencing only the two IEA scenarios that were most optimistic about the continued use of coal, as opposed to two other scenarios that modelled a more aggressive approach to global climate action.

“A reasonable New Hope shareholder could be misled into believing the IEA had only forecast that coal would be a ‘significant part’ of the energy mix, and not that the IEA had also created forecast scenarios where coal demand could dramatically decrease by 2040 and not specified that any one scenario is more likely than the other,” the letter to Asic says.

David Morris, the chief executive office of the Environmental Defenders Office, which is acting for Market Forces, said consumer laws contained safeguards “so that investors can understand what reshaping of economies means”.

He said even if coal company executives had genuinely held views that the coal would not be phased out, they were still required to disclose relevant risks to shareholders.

“Companies like New Hope need to tell the whole truth, not a cherry-picked narrative,” Morris said.

“Our legal framework doesn’t allow companies to omit key facts in such a way as to mislead investors in their financial product. The IEA is quite clear about saying none of their scenarios are preordained, all are possible.

“But they’ve said that if you want to achieve the goal of Paris, there needs to be no new coal, no new gas, from now. That’s a relevant fact that ought to be in the mind of any investor in a pure play coal company.”

Christian Slattery, a campaigner for Market Forces, said New Hope’s business strategy depended on “coal scenarios that are consistent with the failure of the Paris agreement”.

“This company is betting the house against our climate,” he said.

“By doubling down on dirty coal expansions in the face of increasing climate action, New Hope is building a financial house of cards that exposes its shareholders and investors to massive risks.” 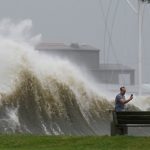 Here’s How Ida Quickly Strengthened Into a Monster