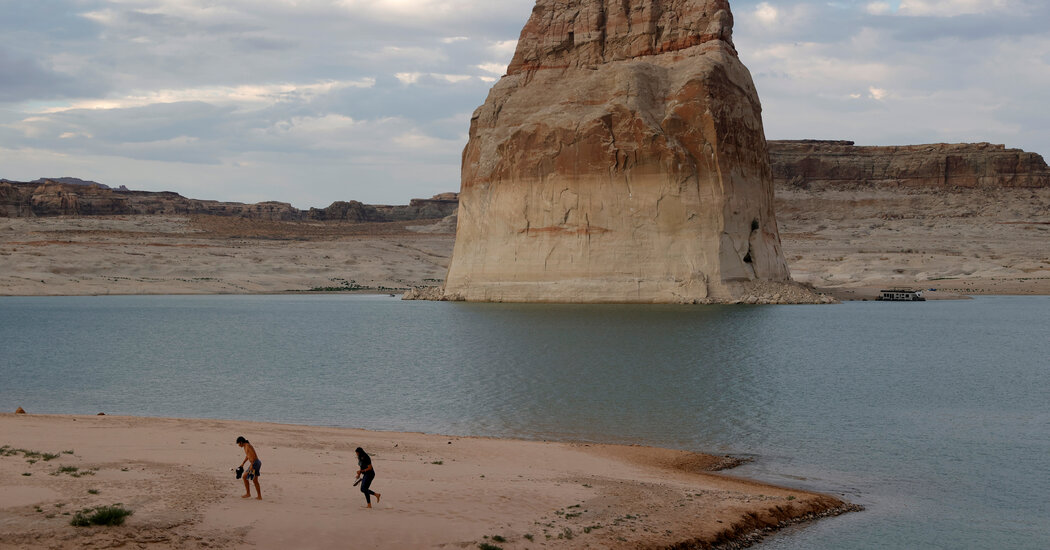 In this summer of wildfires, heat waves and drought, there was another bit of bad environmental news out of the West this week. Federal officials declared a water shortage at Lake Mead, the huge reservoir on the Colorado River near Las Vegas, setting off sharp cuts in water to Arizona farmers next year.

As I reported this week, the shortage declaration was made because the lake is at its lowest level since it first began to fill in the 1930s, a result of overuse and of two decades of drought in the Southwest that have reduced runoff into the river.

The declaration, and the mandatory supply cuts, had long been expected. What is less certain is how much the reductions will help. Will more cuts be necessary, and, if so, when?

Officials had an answer for that on Monday. “Additional actions will likely be necessary in the very near future,” said Camille Touton, a deputy commissioner of the Bureau of Reclamation.

The bureau’s hydrologists forecast that the lake level will continue to drop for the next two years as climate change continues to take a toll on the river. That most likely means Arizona will face even more reductions in 2023, including to some cities, and California will see its first cuts in 2024.

Numbers: The Bureau of Reclamation, an agency of the Interior Department, estimates that Lake Mead will be down to 34 percent of capacity by year’s end.

Listen: A ‘code red’ for humanity

Henry Fountain went on “The Daily” podcast to discuss what needs to happen in the narrowing time window we have to avoid the most devastating climate disruptions.

From the Magazine: The drowning New Jersey Shore

Billions have been spent to protect beachfront property along the state’s coastline. But, inch by inch, water is winning the war.

From Opinion: What cutting-edge science tells us

Advances in attribution science have made clear how climate change is making floods, fires and heat waves worse, Katharine Hayhoe and Friederike Otto write in a guest essay.

This summer, the Western United States has experienced one of its worst wildfire seasons. The Dixie fire, which has spread to more than half a million acres, is the largest single-origin fire in California history. Thousands have been evacuated from their homes.

At the same time, the country has seen a spike in coronavirus cases fueled by the Delta variant.

Now, a team of Harvard scientists is drawing a connection between the two. Last summer, wildfire smoke was associated with thousands of Covid infections and hundreds of deaths, they found. The smoke, which contains high levels of the smallest, most dangerous particulate matter, “substantially exacerbated the health burden of Covid-19,” they wrote. You can read the full article here.

Quotable: “I hope that this is providing an additional piece of evidence for why it’s important to get our act together to combat climate change,” the senior author on the paper said.

A problem for hydrogen fuel

Hydrogen is a clean energy dream: When it’s consumed in a fuel cell, it produces only water, electricity and heat.

But a new study examined the way hydrogen is produced today and came up with an entirely different conclusion. Most hydrogen used today is extracted from natural gas in a process that requires a lot of energy and emits vast amounts of carbon dioxide. Producing natural gas also releases methane, a particularly potent greenhouse gas.

And while the natural gas industry has proposed capturing that carbon dioxide, creating what it promotes as emissions-free “blue” hydrogen, even that fuel still emits more greenhouse gas across its entire supply chain than simply burning natural gas, according to the new research.

Quotable: “To call it a zero-emissions fuel is totally wrong,” the study’s lead author said. “What we found is that it’s not even a low-emissions fuel, either.”

Why do people keep acting in ways they know will ruin them? That question, so central to climate change, is at the heart of a new book about the emptying of the Ogallala Aquifer by farming in the American West, with potentially catastrophic consequences.

In “Running Out: In Search of Water on the High Plains,” Lucas Bessire writes that the aquifer, which runs from South Dakota to Texas and irrigates about one-sixth of world grain production, is being drained far faster than rain can replenish it, especially as heat and drought get worse. In the part of Southwest Kansas where he grew up, an estimated three-quarters of the water is already gone.

Dr. Bessire, an anthropology professor at the University of Oklahoma, returned to his childhood home to try to understand why people would participate in the destruction of the resource that their livelihoods depend on, rather than demanding extraction limits to make irrigation more sustainable.

Some farmers appear unbothered by the consequences of their actions, he writes. Others say they regret the damage they’re causing but feel powerless to stop it. Hope plays a role: Dr. Bessire cites the recurring idea of building sprawling aqueducts to transport water from afar once the aquifer is exhausted, calling it a dubious prospect that nonetheless provides justification to keep pumping.

The book bursts with passages that linger after reading. A farmer compares groundwater extraction to empty mining towns in the mountains: “They took what they want and when it ran out they left.” A circle of sand in place of what used to be cropland, “all that was left after the water had run out and farmers abandoned the field.” Groundwater evaporating as it is sprayed on corn and wheat, the moisture absorbed by clouds that Dr. Bessire watches drift away, taking the future with them.

In one especially haunting section, he compares the depletion of groundwater to the eradication of the bison on that same land in the early 1870s. People killed the animals in such numbers that the value of their hides plummeted, ensuring that few hunters made much money — but still the slaughter continued until there were no bison left.

“Maybe we were just a greedy lot who wanted to get ours and to hell with posterity,” Dr. Bessire quotes from a bison hunter’s memoir. His point is plain: The passage could just as easily have been written today. 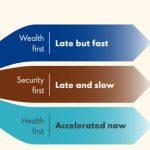