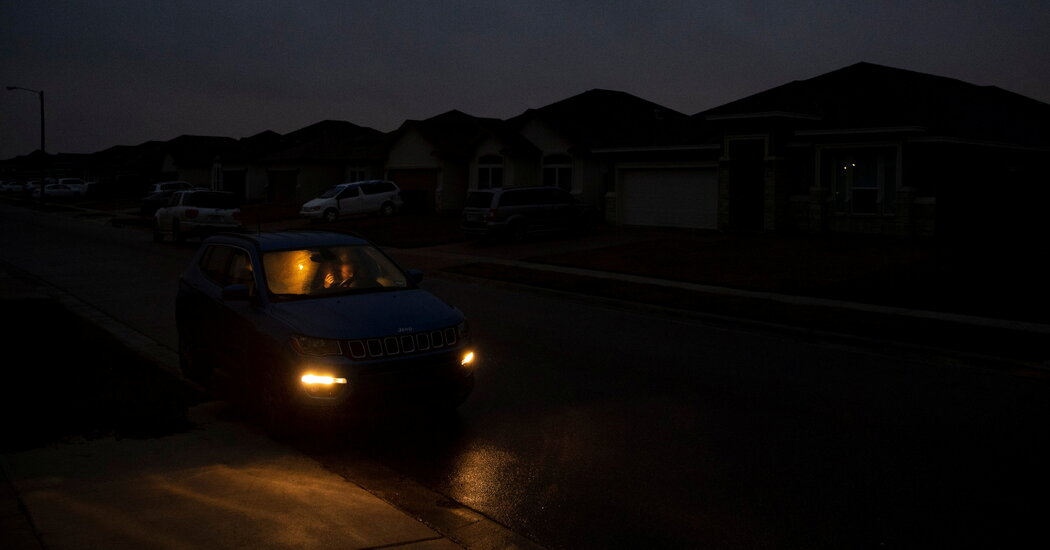 As his state was racked with a huge electricity blackout crisis that left millions of people without heat in frigid temperatures, the governor of Texas took to the television airwaves to start placing blame.

His main target was renewable energy, suggesting that when wind and solar power failed, it led to a systemwide collapse.

“It just shows that fossil fuel is necessary for the state of Texas as well as other states to make sure we will be able to heat our homes in the winter times and cool our homes in the summer times,” said Gov. Greg Abbott, speaking on Sean Hannity’s show on Fox News. Other conservative talk-show hosts had already picked up the theme.

As frigid weather grips the center of the nation, causing widespread power outages, freezing temperatures, slippery roads and weather-related deaths, Governor Abbott’s voice was among the most prominent in a chorus of political figures this week to quickly assert that green energy sources such as wind and solar were contributing to the blackouts. The talking points, coming largely from conservatives, reinvigorated a long-running campaign to claim that emissions-spewing fossil fuels are too valuable a resource to give up.

The efforts came despite the fact that the burning of fossil fuels — which causes climate change by releasing vast amounts of planet-warming carbon dioxide emissions into the atmosphere — is helping to drive the phenomenon of increasingly dangerous hurricanes and other storms, as well as unusual weather patterns.

“Green energy failure” read the banner on the bottom of the screen of Fox News stories about power outages. Social media posts mocked renewable energy as “unreliables.” A Wall Street Journal editorial called for more reliance on coal to help endure frigid temperatures. Some politicians and analysts spread lies and disinformation to advance their defense of fossil fuels.

“Every time we have challenges with the grid, whether it’s in California this past summer or Texas right now, people try to weaponize this for their pet project, which is fossil fuels,” said Leah Stokes, an assistant Professor of Political Science at the University of California, Santa Barbara, whose work has focused on battles over energy policy. “Our infrastructure cannot handle extreme weather events, which these fossil fuels are ironically causing.”

The politicization of the cold weather gripping huge swaths of the country is playing out as President Joseph R. Biden Jr. has made combating climate change a key tenet of his administration. With a sweeping set of executive orders in his initial days in office, Mr. Biden rejoined the Paris Agreement among nations to fight climate change, canceled the Keystone XL pipeline and issued a moratorium on drilling for fossil fuels on federal land, among other things.

Scientists are still analyzing what role human-caused climate change may have played in the current round of winter storms, but it is clear that global warming poses future threats to power systems nationwide with predictions of more intense heat waves and shortages of water. Many electric grids aren’t equipped to handle those extreme conditions, putting them at risk for widespread failure.

That was the case in Texas, where millions of people suffered rolling blackouts. Grids in the Midwest and Southwest also were strained. Dozens of people have died in the storm or its aftermath.

When Gov. Abbott appeared on Fox News, saying “this shows how the Green New Deal would be a deadly deal for the United States of America,” Representative Alexandria Ocasio-Cortez of New York, one of the architects of the proposed Green New Deal, shot back on Twitter. “Gov. Abbott needs to get off TV pointing fingers & start helping people,” she wrote. “After that, he needs to read a book on his own state’s energy supply.”

Tucker Carlson, a Fox News host, had a similar pro-fossil-fuel message earlier in the week. “Global warming is no longer a pressing concern here,” he said, speaking of this week’s frigid weather and invoking the discredited claim that cold weather disproves that the world is warming dangerously. “The windmills froze so the power grid failed,” he said.

Blades of some Texas wind turbines did freeze in place, but wind power is estimated to make up only 7 percent or so of the state’s total capacity this time of year in part because utilities lower their expectations for wind generation in the winter in general.

The bulk of the power loss in Texas came from natural gas suppliers, according to regulators, as pipelines froze, making it difficult for plants to get the fuel they needed. Production from coal and nuclear plants dropped as well. A similar phenomenon played out in Kansas and other states.

As Jesse Jenkins, an energy systems engineer at Princeton University, said on Twitter, “In short, ALL generation types are getting hammered.”

Nevertheless, proponents of fossil fuels are using the current crisis to emphasize why they think fossil fuels need to be part of the overall mix of options to power the grid.

“The anti-carbon movement has really placed no value on reliability,” said Alex Epstein, author of “The Moral Case for Fossil Fuels,” who expressed his views in a long Twitter thread.

Wind energy has long been a target of criticism in America, with some opponents blaming turbines for interrupting vistas, taking up land for hunting, or shifting jobs away from the fossil fuel industry. This week’s crisis in Texas has provided a new rallying point for some of this political messaging.

“We have Joe Biden who is nice and warm in his fossil-fueled White House singing kumbaya with his environmental extremists while Americans are freezing to death,” said Representative Lauren Boebert, a Republican from Colorado, who earlier this year introduced a measure to block re-entry to the Paris climate agreement.

Ms. Boebert mentioned a photo shared repeatedly this week on social media of wind turbines she said were in Texas and apparently being de-iced by helicopter with a substance derived from fossil fuels. However, the image was debunked by the website Gizmodo: the photo was from a test seven years ago on turbines in Sweden.

In Kansas, one of few states that relies heavily on wind power, the blades on some turbines froze, too. However, just like in Texas, the bigger problem was that the state’s frigid temperatures stopped delivery of natural gas to fossil-fuel-burning power plants.

That didn’t stop some Republicans from targeting green energy as a chief culprit.

“Wind turbines are frozen up. Solar is useless,” Mike Thompson, a state senator in Kansas, wrote on his Facebook page. “This is why the expansion of renewables is dangerous.”

Mr. Thompson, in an interview, called coal “our savior” and said the country needs to embrace fossil fuels. “Do away with all those at your own peril in a deep freeze like this,” said Mr. Thompson, a former television weatherman and climate change denialist.

State Representative Brandon Woodard of Kansas, a Democrat, recalled how on Monday, with the epic cold outside his door, he was sitting in his apartment in two layers of sweatpants and wrapped in blankets when he was alerted to rolling blackouts there by an email from a constituent.

“I’m hoping you can explain to me how the state will prevent these so-called rolling outages from becoming a norm,” read the email.

Mr. Woodard said the email, combined with this week’s deep freeze and electrical failures, should serve as a wake-up call for lawmakers to act.

“This is why we have to have the conversations about being resilient to address changing patterns in the climate,” Mr. Woodard said. “I don’t think this is the last time we’ll see rolling blackouts.”

Fancy a deep red? The rise of underwater wineries | Environment