Nordic countries have registered near-record temperatures over the weekend, including highs of 34C (93.2F) in some places.

The latest figures came after Finland’s national meteorological institute registered its hottest temperature for June since records began in 1844.

The high temperatures follow the record-breaking heatwave and wildfires that have caused devastation in parts of North America.

The intense heatwave has killed 95 people in the US state of Oregon alone, its governor said on Sunday. Hundreds are believed to have died from the heat in the US north-west and south-western Canada.

Experts and officials fear that the catastrophic conditions, fuelled by the climate crisis, will only get worse through the coming months.

Michael Reeder, a professor of meteorology in the school of Earth, atmosphere and environment at Australia’s Monash University, said the events on the European and North American continents were not unlinked.

Reeder has written about the meteorological conditions that allowed for the North American heatwave to form. He said a tropical low in the western Pacific, near Japan, had disturbed the atmosphere, creating ripples around the hemisphere as what is known as a Rossby wave.

That wave broke off the west of Canada, triggering the conditions for the heatwave.

“It’s like plucking a guitar string. The disturbance propagated along the jet stream,” Reeder said.

“It gets to North America, it (amplified) and produced a big high pressure system in the middle part of the atmosphere.”

He said that had then kicked off another wave over the north Atlantic that then broke and produced the conditions for high temperatures in the Nordic regions.

“So from that perspective, the high temperatures over Scandinavia are directly linked to what happened in North America.”

At a national level, June 2021 was the third-hottest ever recorded in Sweden.

And Norway’s meteorological institute registered 34C (93.2F) in Saltdal, a county near the Polar Circle. That is the highest temperature measured in the country this year, and just 1.6C (34.9F) short of Norway’s all-time record.

Canada is battling a string of forest fires in the western province of British Columbia after sweltering under temperatures of up to 49.6C (121.3F), a new national record.

Several parts of the world have already experienced crushing heatwaves this year.

In the southern hemisphere, June was also the hottest on record in New Zealand, where it is a winter month. On Thursday, the United Nations confirmed a new record high temperature for the Antarctic continent – measured last year – of 18.3C (64.9F). 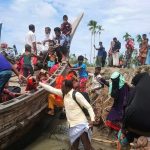 Even Amid a Pandemic, More Than 40 Million People Fled Their Homes 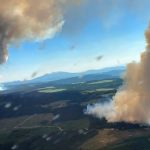