The storage potential of one of the Earth’s biggest carbon sinks – soils – may have been overestimated, research shows. This could mean ecosystems on land soaking up less of humanity’s emissions than expected, and more rapid global heating.

Soils and the plants that grow in them absorb about a third of the carbon emissions that drive the climate crisis, partly limiting the impact of fossil-fuel burning. Rising carbon dioxide levels in the atmosphere can increase plant growth and, until now, it was assumed carbon storage in soils would increase too.

But the study, based on over 100 experiments, found the opposite. When plant growth increases, soil carbon does not. The finding is significant because the amount of organic carbon stored in soils is about three times that in living plants and double that in the atmosphere. Soils can also store carbon for centuries, whereas plants and trees rot quickly after they die.

It is not yet known how big the effect of lower carbon storage in soils might be on the speed of climate change, and experts cautioned that other impacts of the climate emergency such as drought would also affect how well plants and soils store carbon.

“We found that when rising CO2 increases plant growth, there is a decrease in soil carbon storage. That’s a very important conclusion,” said César Terrer, who led the research while at Stanford University in the US. He said that if soils do absorb less in future, “the speed of global warming could be higher”.

Terrier said soils, plants and trees were important for carbon levels, but that ending the burning of fossil fuels remains essential. “If we really want to stop global warming, we need to stop emissions, because ecosystems only take up a fraction of all the CO2 emissions,” he said.

The study, published in the journal Nature, analysed more than 100 experiments from across the world in which soils, plants and trees were exposed to higher CO2 levels than in today’s atmosphere. The biomass growing in forests rose by 23% in experiments where the CO2 level used was double pre-industrial atmospheric levels. It is 50% higher today. But the forest soils did not store any more organic carbon at all.

It was thought that biomass and soil carbon would increase in tandem, as more plant biomass falls to the ground and turns into organic matter. But increased plant and tree growth requires more nutrients from the soil, which may explain the new finding, the scientists said. Extracting the extra nutrients requires the plants to increase the symbiotic microbial activity in their roots, which then releases CO2 to the atmosphere that might otherwise have remained locked in the soil.

The researchers found that in grasslands, elevated CO2 led to 9% plant growth – less than forests – but soil carbon rose by 8%. Terrier said there has been a lot of discussion about tree planting as a way to tackle the climate crisis. “What I found very concerning in that debate is that people were suggesting planting trees in natural grasslands, savannah, and tundra,” he said. “I think that would be a terrible mistake because, as our results imply, there is a very large potential to increase soil carbon storage in grasslands.”

Prof Simon Lewis, at University College London, who was not part of the research team, said: “Given that the land absorbs 30% of the carbon emitted from fossil fuels and deforestation, understanding if that will change in the future matters.”

Prof Pete Smith at the University of Aberdeen said: “The combined effect of CO2 on plants and soils and on climate change is what matters in terms of the real world response.” 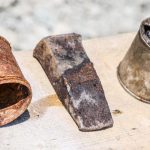 Melting Glaciers Have Exposed Frozen Relics of World War I