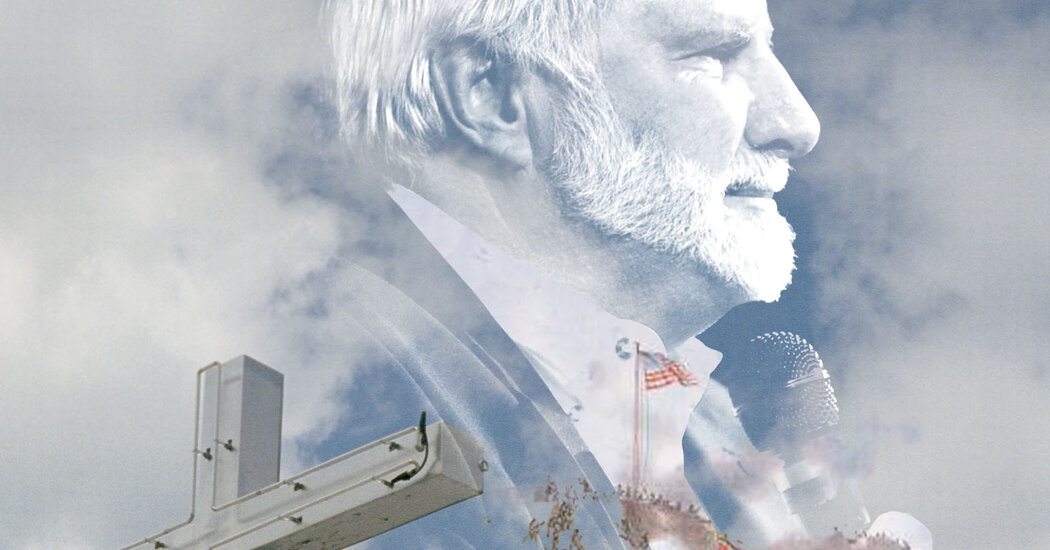 The Rev. Rick Joyner is a famous evangelical leader who has called on Christians to arm themselves for an inevitable civil war against liberals, who he suggests are allies of the devil.

But this is the awkward part: His five children would be on the other side of that civil war, as he and his kids all acknowledge. Just as America is torn asunder by politics and polarization, so is the Joyner family. The Joyners love each other, are there for each other — and despair for each other.

“He talks about Democrats being evil, forgetting that all five of his kids vote Democratic,” said his eldest, Anna Jane Joyner, 36, a climate change activist and podcast host (her father has suggested that climate change is a Communist conspiracy). “Who is he asking his followers to take up arms against? Liberal activists? That’s me.”

She worries that his far-right rhetoric may get people killed, so she feels a responsibility to challenge him. “I think it’s completely possible that some of my dad’s followers could pick up guns and cause violence because they think they’re defending the country,” she said.

Sam Joyner, 26, a ceramic artist and the youngest of the siblings, was also blunt about their father: “He’s causing harm in my view, and he’s being incredibly irresponsible.”

“I think what he does is morally wrong, but I love him,” added Ben Joyner, 28, a filmmaker. “I don’t want to hurt him, but when he’s spreading dangerous ideas, it gets complicated.”

I called Pastor Joyner to ask if his children frustrate him as much as he does them. “It’s about even,” he said dryly, and he seemed proud of them but pained that while he has won over vast throngs of strangers who see him as a modern prophet, he can’t persuade some of the people he cares most about. None of the children identify as evangelical, and all deplore his politics.

“One of my goals as a parent was to raise strong, independent children,” he said. “But I think I overshot the runway.”

The minister, 71, conceded that in the civil war he expects to break out soon, “we would be on opposite sides.” But he hastened to add that he doesn’t plan on exchanging rifle shots with his children. “I hope my kids don’t get involved in the violence, but it’s coming,” he said.

A former professional pilot, he is known for his best-selling books, his television appearances, his fervent endorsements of Donald Trump and his dismissal of Joe Biden as a Marxist who stole the election. He claims liberals are in league with Satan and Democrats are plotting “to criminalize Christianity.”

Of course, I may not be a fair narrator. Joyner also says that journalists constitute the “worst terrorist threat.”

“There is a responsibility to hold those you love accountable,” said Amber Grace Joyner, 30, a musician. But how? The siblings disagree among themselves. Aaryn Joyner, 34, a farmer and florist, is the peacemaker in the group. She says she’s disappointed by what her father says, but “I’m not willing to sacrifice my relationship with him to call him out.”

The most outspoken is Anna Jane, who says her father’s rhetoric became more extreme in recent years. She had her first falling out with him when she became a Democrat and an environmentalist while a sophomore at the University of North Carolina at Chapel Hill. He cut off her college funding, and she moved to New Zealand. Soon after, she nearly died in a boating accident — and the first person she called was her dad. They reconciled.

He resumed paying her tuition, and after graduation he supported her so she could take an unpaid internship with the Sierra Club, an organization he disapproved of. He also promoted a film by his son Ben about a gay man in the South, even though it likewise had him gritting his teeth.

I told Rick Joyner that I thought his struggles with his children reflected a larger generation gap and dwindling of influence of the religious right. To my surprise, he agreed. “The church in America has been tremendously weakened,” he acknowledged.

If the Joyners are a microcosm of a nation divided, perhaps they also offer a ray of hope in their ability to bridge differences. They remain close and get together for holidays, even if gatherings are tense.

“At what point can I no longer go home for Thanksgiving and watch football with my dad?” Ben mused. “By doing so, am I condoning his behavior? It can be hard to draw that line in the sand, especially when you love this person.”

Anna Jane put it this way: “Is it OK to just talk about movies and dogs with someone who’s trying to incite civil war? I don’t know.”

She describes herself today as “an Episcopalian/Buddhist/pantheist/agnostic,” yet somehow, improbably, she remains close to her father.

Last year when Hurricane Sally hit coastal Alabama, where Anna Jane lives, she had to evacuate in the middle of the night. She was furious at her father for his climate denial — but he’s the person she called in that crisis, and he stayed on the phone with her for much of the night, relaying the latest information and helping to keep her safe.

“I’m so angry at him for his politics and for endangering me and all of us by not believing in climate change,” she said. “And yet he’s the one I turn to in the middle of the night when I’m evacuating and I’m really scared.”