Pension funds must set a target of net zero emissions for their investments if the UK is to meet its climate goals, influential figures in climate activism have urged.

Many people are unaware of whether their pensions funds are invested in fossil fuels or high-carbon activities, and even companies that have publicly committed to reaching net zero emissions may have pension fund investments that are still wedded to high-carbon businesses.

As the UK prepares to host the UN climate talks Cop26 in Glasgow this November, several prominent climate campaigners have written to the Guardian to urge pensions companies to sign up to green investment principles. The signatories are: Christiana Figueres, the former UN climate chief who oversaw the Paris agreement; Nigel Topping, the UK government’s business champion for Cop26; Richard Curtis, the film-maker and co-founder of the campaign group Make My Money Matter; and Amanda Mackenzie, chief executive of the charity Business in the Community.

“[Cop26] is a unique opportunity for Britain to showcase how our financial system can be leveraged to tackle climate change on the global stage,” they wrote. “To achieve this, we must all commit to making our money matter, starting with our pensions.”

While an increasing number of companies are aligning their business activities with the UK’s target of reaching net zero emissions by 2050, pension investments are lagging behind. “Why is it that a company working hard to achieve net zero in their operations continues to invest millions into a pension which does the opposite?” the signatories asked.

They urged all companies to sign up to the green pensions charter, which requires businesses to ensure their company pension scheme achieves net zero emissions by 2050, as well as setting short-term targets to halve the greenhouse gas emissions associated with their portfolios by 2030.

Emissions targets for the next decade are crucial to ensure that the goals of the Paris agreement, of holding global temperature rises well below 2C above pre-industrial levels, with an aspiration to limit rises to 1.5C, can be met.

Some big pension funds have already committed to the green pensions charter principles, including Scottish Widows, Aviva, Nest, the BT pension scheme, and some local government pension schemes. About £400bn is now invested in 15 schemes that are aligned with the net zero and 2030 targets.

The UK pensions sector accounts for about £2.6tn in funds, so any shift towards investing in lower-carbon portfolios would have a strong effect in investment and business.

The signatories wrote: “If we want to deliver healthy returns for our retirements, as well as ensure a healthy world for our grandchildren, 2021 needs to be the year that we unleash the power of our pensions … What’s the point in saving for retirement in a world on fire?”

Individuals can write to their pension scheme managers to ask whether their investment portfolios are exposed to climate risk, and shareholders can vote at company annual general meetings. Pension fund investors can wield substantial influence over the companies whose shares they hold, and their long-term outlook means that the risks of the climate crisis are having an increasing impact on their projections.

The UK government is considering strengthening financial disclosure requirements on publicly listed companies, that would require them to assess and publish details of the risks they face from climate breakdown.

Finance and business will be key to success at Cop26, and Topping is leading a Race to Zero, by which companies commit to a mid-century net zero target and emissions limits for the next decade.

Mark Carney, the former governor of the Bank of England and a UN climate envoy, recently announced a new initiative called the Glasgow Financial Alliance for Net Zero, under which banks and financial institutions, including Barclays, HSBC and the insurer Axa, have signed up to similar commitments.

The IPCC report is a massive alert that the time for climate action is nearly gone, but crucially not gone yet | Greg Jericho 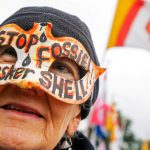