The Morrison government is under increasing pressure to act on the climate crisis, with a new poll showing seven in 10 Australians want the Coalition to lock in stronger commitments in the lead-up to this year’s Glasgow summit.

The Lowy Institute’s annual survey of sentiment on climate action finds strong domestic support for Australia committing to achieve net zero emissions by 2050 and majority support for a ban on new coalmines.

The findings appear to undercut resistance from some prominent members of the Nationals, who have publicly cautioned the government against making a net zero commitment and have been pushing for a continued embrace of coal.

The Lowy Institute-commissioned poll of 3,286 Australians found overall concern about climate change had increased over the past year, with 60% of respondents describing global warming as “a serious and pressing problem” and agreeing “we should begin taking steps now even if this involves significant costs”.

That represented a four-point increase from 2020.

In the latest climate poll, a majority (55%) also said the government’s main priority for energy policy should be “reducing carbon emissions” – an eight percentage point increase since 2019.

That compares with 32% of the sample who said the priority should be reducing household bills – a decline of six points over the same period.

Reducing the risk of power blackouts – a key focus of the government’s messaging on the issue – was nominated by just 12% of respondents as the energy policy priority in the most recent poll, down three points.

With the government facing international pressure to endorse deeper emission cuts in the lead-up to the expanded G7 summit in June and the Cop26 climate summit in Glasgow in November, the poll finds strong domestic support for doing so.

When presented with a question about the forthcoming UN climate negotiations, 70% agreed that “Australia should join other countries, such as the United Kingdom and the United States, to increase its commitments to address climate change”.

That compared with about three in 10 respondents (29%) who chose the alternative statement that “Australia should continue with its current policies to address climate change”, while 1% said they did not know.

Some 78% of those surveyed said they would support a net zero emissions target by 2050 – an idea Scott Morrison has expressed as a “preference” rather than a formal commitment – while 20% said they would oppose it.

The director of the Lowy Institute’s public opinion and foreign policy program, Natasha Kassam, said the politics and economics of climate action were shifting and a number of elected officials “would take heart” from the results.

Kassam said the level of support for moving away from coal would not have been seen several years ago. She noted that 70% of Australia’s coal and gas exports went to countries in Asia that had set net zero commitments.

“We’ve seen Australians’ concern about the climate increase since 2012,” she said, while noting there had been a slight dip in the poll last year when “understandably much of the public was feeling pretty anxious about the pandemic”.

“What has really shifted in the last couple of years is the willingness of the public to bear costs for climate action … and now we can see the vast majority accept benefits outweigh the costs.”

With the government pursuing its so-called “gas-fired recovery” from the pandemic, and planning to spend up to $600m on a new gas-fired power plant in New South Wales, 58% of the sample said they would support increasing the use of gas for Australia’s energy generation.

And seven years after the Abbott government repealed the Gillard government’s carbon price after a relentless political campaign, some 64% of the sample said they would support an emissions trading scheme or a carbon tax.

The Lowy Institute said its climate poll was based on a nationally representative online and telephone survey conducted by the Social Research Centre between 12 and 26 April, with a margin of error of about 1.8%.

The Sydney-based thinktank has been tracking attitudes to global warming since 2006, when 68% of respondents agreed that it was “a serious and pressing problem” requiring Australia to take steps even if it involved costs.

That dropped to a low of 36% in 2012 at the height of the acrimonious political battle over the Gillard government’s carbon pricing scheme, before steadily rising in subsequent years. 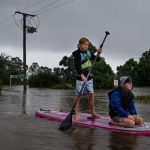