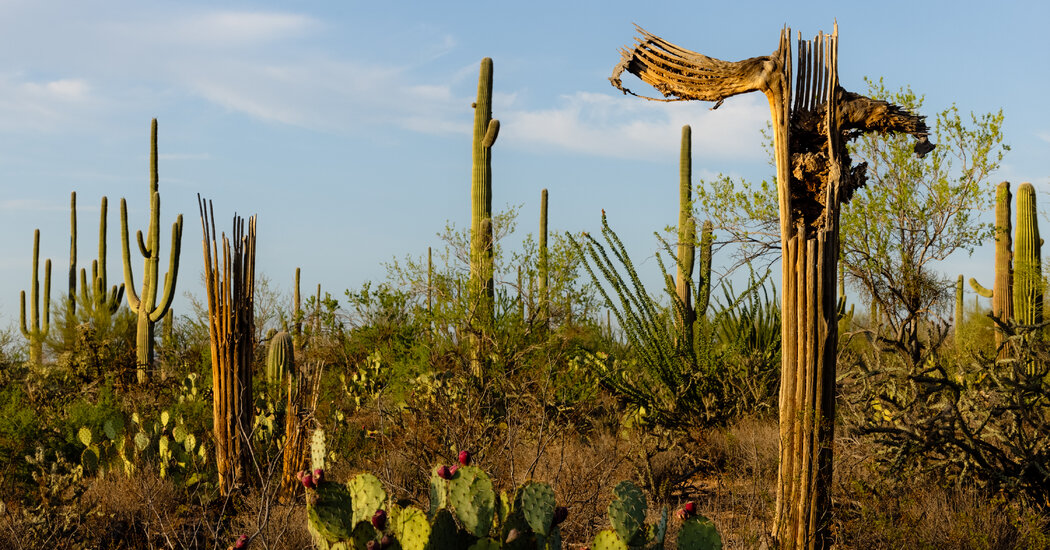 ORO VALLEY, Ariz. — It began with a flash of lightning, the fire that swept across the rugged Santa Catalina Mountains on Tucson’s edge. By the time firefighters got the blaze under control, it had torched thousands of saguaros, the towering cactuses that can reach heights of 60 feet and live for 200 years.

The loss was gut-wrenching for many in Arizona, where Indigenous peoples learned to draw sustenance from the treelike saguaros long before they emerged as a celebrated symbol of the Southwest. Some saguaros are still standing within the year-old scar of the Bighorn Fire, their trunks singed all the way up to their limbs, a testament to their reputation as masters of desert survival.

Still, said Benjamin Wilder, an authority on saguaros and director of the University of Arizona’s Desert Laboratory in Tucson, the fire-damaged cactuses would likely have their life spans curtailed.

“I don’t think there’s any more near-misses as we get to the point of much larger fires,” he said.

Wildfires are just one of many threats facing saguaros, menacing not only the cactuses but the mesquite, ironwood and palo verde plants that protect them. At the same time, the unfettered growth of invasive species, especially the very flammable buffelgrass, has spurred more competition for scarce water resources while also fueling fast-moving — and hotter — fires.

Then there is the urban sprawl of Arizona’s towns and cities. While laws generally protect saguaros from being chopped down — try that in Arizona and you can face years in prison — plant physiologists say that all the concrete in metro areas absorbs heat and holds on to it. That creates nighttime temperatures higher than in the open desert, making it harder for saguaros to minimize water loss.

Taken separately, saguaros, which can be exceptionally resilient once they mature, could possibly respond and adapt to each hazard. But scientists warn that climate change may be turbocharging all the threats at once, leveling a striking array of challenges against the iconic saguaro. (How to tell if people are new to Arizona? They pronounce the cactus’s name using a hard “g,” instead of saying suh-wahr-ohs.)

Some troubling signs are already raising alarm bells for admirers of the tallest cactus in the United States. Of the 10,000 saguaros surveyed in Saguaro National Park for a National Park Service report on climate change and the saguaro, only 70 were younger than 11 years old, and they were found almost exclusively in rocky foothill habitats.

“Establishment of young saguaros has nearly ceased since the early 1990s in nearly all habitats,” the scientists who wrote the report said, noting that the population decline in young saguaros took place during a period when temperatures in the Sonoran Desert began rising and the area entered a long-term drought.

Such findings are troubling for a plant that relies on what scientists describe as a “Goldilocks” set of favorable conditions to become established. Saguaros, each of which can disperse hundreds of thousands of short-lived seeds in attempts to reproduce, grow only in the northern reaches of the Sonoran Desert — in southern Arizona, southeastern California and parts of Sonora State in northwestern Mexico.

In places with relatively low precipitation, it can take a century for a saguaro to sprout the limbs that can give the cactuses a humanlike appearance; one saguaro in Arizona with 78 arms is well over a hundred years old and known as Shiva, after the Hindu deity.

Viewing the saguaro as a person is also rooted in the culture of the Tohono O’odham Nation, whose citizens live on both sides of the border with Mexico. According to the tribe’s oral traditions, a mother left her child alone while she went off to play toka, a traditional game similar to field hockey.

Lonely, the child wandered to an anthill in the desert and then sank into the ground, returning as a towering saguaro. Relying on folkways that upend the idea of a “food desert,” tribal citizens still use the sun-bleached ribs of the saguaro, fashioned into a pole called a kuipad, to harvest the cactus’s red fruit, which is eaten raw, made into syrup or fermented into wine.

Jacelle E. Ramon-Sauberan, who teaches history and culture at Tohono O’odham Community College in Sells, Ariz., said the ritual involved both capturing the fruit and symbolically opening the way for the harvest season. “We’re pulling the clouds down to bring the rains,” Ms. Ramon-Sauberan explained.

As a keystone species, the saguaro also holds exceptional importance for other life in the desert. Gila woodpeckers and gilded flickers bore holes in saguaros for nests, which can also shelter elf owls. Bighorn sheep and mule deer are known to eat saguaro flesh, a coveted water source in places with scant precipitation.

Saguaros, in turn, rely on lesser long-nosed bats and white-winged doves for pollination. Coyotes and desert tortoises feast on the cactus’s fruit, spreading the seeds in scat left on the desert floor.

But human-caused changes to the Sonoran Desert are disrupting cycles for saguaros that were honed over thousands of years. One of the biggest challenges involves buffelgrass, a drought-tolerant plant native to Africa, Asia and the Middle East that was intentionally brought to arid parts of the United States in the 1930s for cattle forage and erosion control.

While rising temperatures could benefit the saguaros by enlarging the areas in which they can survive, hotter weather might also be a boon to buffelgrass, which has steadily spread across the Southwest. Buffelgrass infestations have surged since the 1980s, with patches doubling in size every seven years or so.

The buffelgrass competes with species like palo verde trees, which provide canopy protection for young, vulnerable, slow-growing saguaros — which can take about 10 years to grow an inch and a half tall. But more crucially, perhaps, buffelgrass has turned deserts, which had been relatively fireproof, into fire-prone grasslands.

“The buffelgrass fills in those spaces in between saguaros, providing the fuel to carry bigger fires in an ecosystem that really isn’t adapted for it,” said Don Swann, a wildlife biologist at Saguaro National Park.

In what may be a harbinger, an exceptionally devastating stretch of wildfires last year, including the Bighorn Fire in the Santa Catalina Mountains and the Bush Fire in the Tonto National Forest, left thousands of saguaros dead and many survivors badly damaged. Relatively heavy monsoon rains have provided something of a respite this year, though the authorities in Arizona have scrambled to contain nearly 20 wildfires around the state in recent weeks.

In the meantime, some who live in the shadow of the saguaros are mobilizing to protect the giant cactuses. Some volunteers dig out buffelgrass in Tucson and surrounding areas by hand; others spray the invaders with herbicide. In Saguaro National Park, a helicopter crew is conducting aerial spraying this week in some hard-to-reach places in the Rincon Mountains.

Patricia Estes, who used to run the University of Arizona’s molecular and cellular biology laboratory, founded a volunteer group six years ago called the Catalina State Park Buffel Slayers. She said she got involved in digging up buffelgrass after learning how the invasive plant could unleash destruction in dry habitats.

“If you have a buffelgrass fire in an alley in Tucson, it will melt someone’s car or chain-link fence,” Ms. Estes said, adding, “The biggest threat for saguaros in climate change isn’t the heat or the drought. It’s fire that sweeps in and burns extremely hot.”

Bill Gates is the biggest private owner of farmland in the United States. Why? | Bill Gates 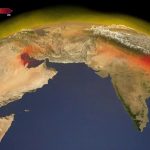