A group of activists who were threatened with arrest on Saturday evening after staging an “occupation” of the Science Museum in London have vowed to renew their fight on Sunday.

The London branch of the UK Student Climate Network (UKSCN) organised a demonstration at the museum in protest at its decision to accept sponsorship from fossil fuel giant Shell.

The museum in South Kensington has partnered with Shell to fund its Our Future Planet exhibition about carbon capture and storage and nature-based solutions to the climate crisis.

On Saturday afternoon, a group of activists draped a banner reading “Drop Shell Sponsorship” from one of the museum’s balconies.

Other protesters brandished anti-Shell placards, while some gave speeches about the company and global warming that were livestreamed on the group’s social media platforms.

They had planned to stay in the building all night, tweeting: “This is an occupation. We will be staying in the Science Museum until tomorrow afternoon, continuing our livestream and continuing to tell science museum to #DropShell.”

UKSCN said that, at about 9pm, police officers threatened to arrest protesters unless they vacated the building.

The group tweeted: “The police protect fossil fuel interest. We know exactly what side they are on.”

The protesters claimed “more than 30 cops” had been dispatched “to arrest 20 teenagers and scientists”.

UKSCN said its members would be back at the museum to continue the protest at 1pm on Sunday.

In a Twitter post, organisers said: “The Science Museum would rather have kids arrested than drop their polluting sponsors but we will not be silenced.

“We will be back outside the science museum at 1pm tomorrow and this time we are asking you to join us.”

An open letter to the museum published on UKSCN’s website said: “The fact that Shell, a company with a vested interest in the continued use of fossil fuels, is financially supporting an exhibition about climate change solutions is appalling.

“We condemn the Science Museum’s decision to accept this sponsorship and provide Shell with an opportunity for brazen green-washing.”

It said Shell had a history of committing “horrific human rights violations” in the developing world.

The letter continued: “Solving the climate crisis goes beyond cutting carbon emissions; this must be a fight for climate justice.

“We stand alongside the activists in the Global South who face violence from fossil fuel corporations, such as Shell, and the communities who are and will be hit hardest by climate change, despite contributing the least to cause it.” 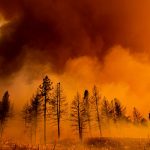 Study: Which Countries Will Best Survive a Collapse?