If America finally weans itself off planet-heating emissions, the country will look and feel very different.

Landscapes from coast to coast would be transformed, carpeted in wind turbines and solar panels, with enough new transmission lines to wrap around Earth 19 times. The populace would whiz past in their electric cars, to and from homes equipped with induction stoves and heat pumps. The air would be near-pristine. Hundreds of thousands of people who would have prematurely died from the toxic fossil-fuel age would still be alive.

It’s an appealing vision, according to Eric Larsen, senior research engineer at Princeton University. “In general, it will be a more pleasant place to be living in when we get to net zero emissions,” he said. “We will have cleaner air, and [will] have done our part to avoid disastrous climate change. That’s a good thing for us and the rest of the world.”

Getting to this point by 2050 is a key goal set by Joe Biden in the effort to stem the worsening impacts of the climate crisis, which is already turning large parts of the US west to charcoal and pushing water to lap at the doorsteps of the nation’s coastal cities. But avoiding cataclysm requires a metamorphosis unlike any other in American history in a narrowing window of time.

“In terms of the pace of change, it’s unprecedented,” said Larsen, who led a Princeton team’s exhaustive analysis of the path to net zero emissions that is helping guide the longer-term thinking of Biden’s administration. “It’s not going to be a walk in the park. We need to start now. And if we delay starting now, we’re going to have to go even faster.”

How quickly societies move away from coal, oil and gas is in many respects the defining, existential challenge of our time, one that the White House frames in both grim realism and fresh opportunity.

“Right now we are robbing young people of their future,” Gina McCarthy, the president’s top climate adviser, told the Guardian. “But there’s a bright future ahead if we work together. It’s doable and must-do at the same time.”

So what will it take to reach net zero emissions?

The fading era of coal, which once helped forge the US as the globe’s economic Goliath, has to completely end a decade from now, with more than 1,000 coalmines and associated power plants shutting. Use of oil and gas will have to be severely scaled back, too, albeit over a longer time frame.

In their stead, a gargantuan effort to erect solar panels and wind turbines – first an extra 300GW of wind and 300GW of solar by 2030, before supply soars further to five times today’s transmission capacity by 2050.

This endeavor will require around 590,000 sq km (or 227,800 sq miles) of America to be blanketed in turbines and panels, around a tenth of all the land in the contiguous US. If you took a stroll along an Atlantic-facing beach there would be a good chance you’d see renewable energy in all directions, with an expanse of ocean the size of Belgium dotted with towering offshore wind turbines. 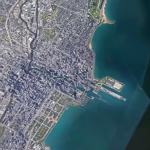 A Battle Between a Great City and a Great Lake