Growing up in southern Spain, Ángel León paid little attention to the meadows of seagrass that fringed the turquoise waters near his home, their slender blades grazing him as he swam in the Bay of Cádiz.

It was only decades later – as he was fast becoming known as one of the country’s most innovative chefs – that he noticed something he had missed in previous encounters with Zostera marina: a clutch of tiny green grains clinging to the base of the eelgrass.

His culinary instincts, honed over years in the kitchen of his restaurant Aponiente, kicked in. Could this marine grain be edible?

Lab tests hinted at its tremendous potential: gluten-free, high in omega-6 and -9 fatty acids, and contains 50% more protein than rice per grain, according to Aponiente’s research. And all of it growing without freshwater or fertiliser.

The find has set the chef, whose restaurant won its third Michelin star in 2017, on a mission to recast the common eelgrass as a potential superfood, albeit one whose singular lifecycle could have far-reaching consequences. “In a world that is three-quarters water, it could fundamentally transform how we see oceans,” says León. “This could be the beginning of a new concept of understanding the sea as a garden.”

It’s a sweeping statement that would raise eyebrows from anyone else. But León, known across Spain as el Chef del Mar(the chef of the sea), has long pushed the boundaries of seafood, fashioning chorizos out of discarded fish parts and serving sea-grown versions of tomatoes and pears at his restaurant near the Bay of Cádiz.

“When I started Aponiente 12 years ago, my goal was to open a restaurant that served everything that has no value in the sea,” he says. “The first years were awful because nobody understood why I was serving customers produce that nobody wanted.”

Still, he pushed forward with his “cuisine of the unknown seas”. His efforts to bring little-known marine species to the fore were recognised in 2010 with his first Michelin star. By the time the restaurant earned its third star, León had become a fixture on Spain’s gastronomy scene: a trailblazing chef determined to redefine how we treat the sea.

What León and his team refer to as “marine grain” expands on this, in one of his most ambitious projects to date. After stumbling across the grain in 2017, León began looking for any mention of Zostera marina being used as food. He finally found an article from 1973 in the journal Science on how it was an important part of the diet of the Seri, an Indigenous people living on the Gulf of California in Sonora, Mexico, and the only known case of a grain from the sea being used as a human food source.

Next came the question of whether the perennial plant could be cultivated. In the Bay of Cádiz, the once-abundant plant had been reduced to an area of just four sq metres, echoing a decline seen around the world as seagrass meadows reel from increased human activity along coastlines and steadily rising water temperatures.

Working with a team at the University of Cádiz and researchers from the regional government, a pilot project was launched to adapt three small areas across a third of a hectare (0.75 acres) of salt marshes into what León calls a “marine garden”.

It was not until 18 months later – after the plants had produced grains – that León steeled himself for the ultimate test, said Juan Martín, Aponiente’s environmental manager.

“Ángel came to me, his tone very serious, and said: ‘Juan, I would like to have some grains because I have no idea how it tastes. Imagine if it doesn’t taste good,’” says Martín. “It’s incredible. He threw himself into it blindly, invested his own money, and he had never even tried this marine grain.”

León put the grain through a battery of recipes, grinding it to make flour for bread and pasta and steeping it in flavours to mimic Spain’s classic rice dishes.

“It’s interesting. When you eat it with the husk, similar to brown rice, it has a hint of the sea at the end,” says León. “But without the husk, you don’t taste the sea.” He found that the grain absorbed flavour well, taking two minutes longer to cook than rice and softening if overcooked.

In the marine garden, León and his team were watching as the plant lived up to its reputation as an architect of ecosystems: transforming the abandoned salt marsh into a flourishing habitat teeming with life, from seahorses to scallops.

The plant’s impact could stretch much further. Capable of capturing carbon 35 times faster than tropical rainforests and described by the WWF as an “incredible tool” in fighting the climate crisis, seagrass absorbs 10% of the ocean’s carbon annually despite covering just 0.2% of the seabed.

News of what León and his team were up to soon began making waves around the world. “When I first heard of it, I was going ‘Wow, this is very interesting,’” says Robert Orth, a professor at the Virginia Institute of Marine Science, who has spent more than six decades studying seagrass. “I don’t know of anyone that has attempted to do what this chef has done.”

We’ve opened a window. It’s a new way to feed ourselves

According to Orth, seagrass has been used as insulation for houses, roofing material and even for packing seafood, but never cultivated as food. It is an initiative riddled with challenges. Wild seagrass meadows have been dying off at an alarming rate in recent decades, while few researchers have managed to successfully transplant and grow seagrass, he says.

In southern Spain, however, the team’s first marine garden suggests potential average harvests could be about 3.5 tonnes a hectare. While the yield is about a third of what one could achieve with rice, León points to the potential for low-cost and environmentally friendly cultivation. “If nature gifts you with 3,500kg without doing anything – no antibiotics, no fertiliser, just seawater and movement – then we have a project that suggests one can cultivate marine grain.”

The push is now on to scale up the project, adapting as much as five hectares of salt marshes into areas for cultivating eelgrass. Every success is carefully tracked, in hopes of better understanding the conditions – from water temperature to salinity – that the plant needs to thrive.

While it is likely to be years before the grain becomes a staple at Aponiente, León’s voice rises with excitement as he considers the transformative possibility of Zostera marina’s minuscule, long-overlooked grain – and its reliance on only seawater for irrigation. “In the end, it’s like everything,” he says. “If you respect the areas in the sea where this grain is being grown, it would ensure humans take care of it. It means humans would defend it.”

He and his team envision a global reach for their project, paving the way for people to harness the plant’s potential to boost aquatic ecosystems, feed populations and fight the climate crisis. “We’ve opened a window,” says León. “I believe it’s a new way to feed ourselves.” 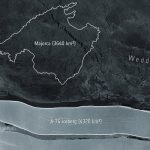