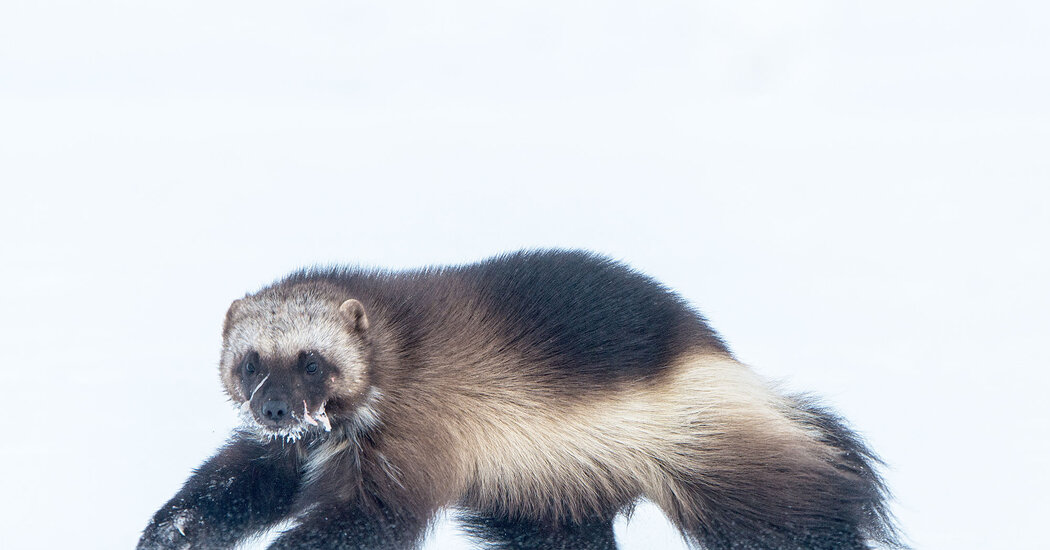 On Alaska’s North Slope, treeless and snow-shrouded for much of the year, it isn’t easy being a wolverine. The sinewy, solitary animals survive through a constant search for food, burrowing into snowdrifts to rest.

But the Arctic is rapidly changing, warming much faster than any other region, and the snow is melting earlier. Researchers want to understand how wolverines will adapt.

Peter Mather, a photographer, documented researchers’ fieldwork over several seasons. The images provide a rare glimpse at wolverines in the Arctic wilds.

With their large feet, wolverines can pad their way across the snowy tundra as if on snowshoes. But there is little place to hide from their main predator, the Arctic wolf. They have the stamina to chase caribou for dozens of miles if necessary, and the strength to kill the much larger animals. 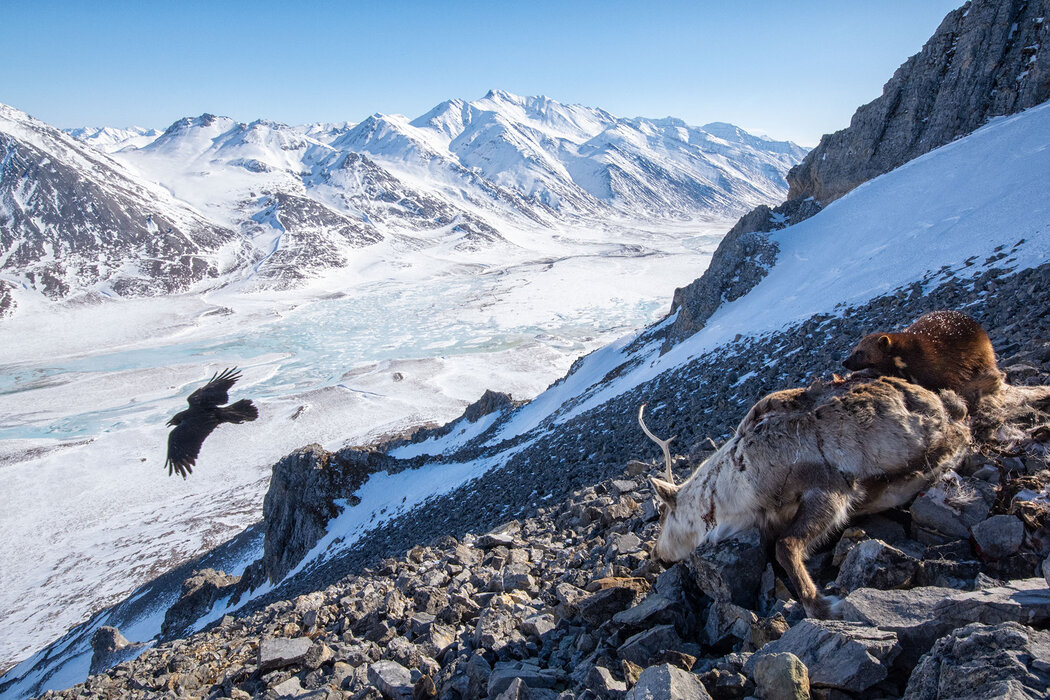 But wolverines are also scavengers, using their strong jaws to feast on carcasses left by wolves. 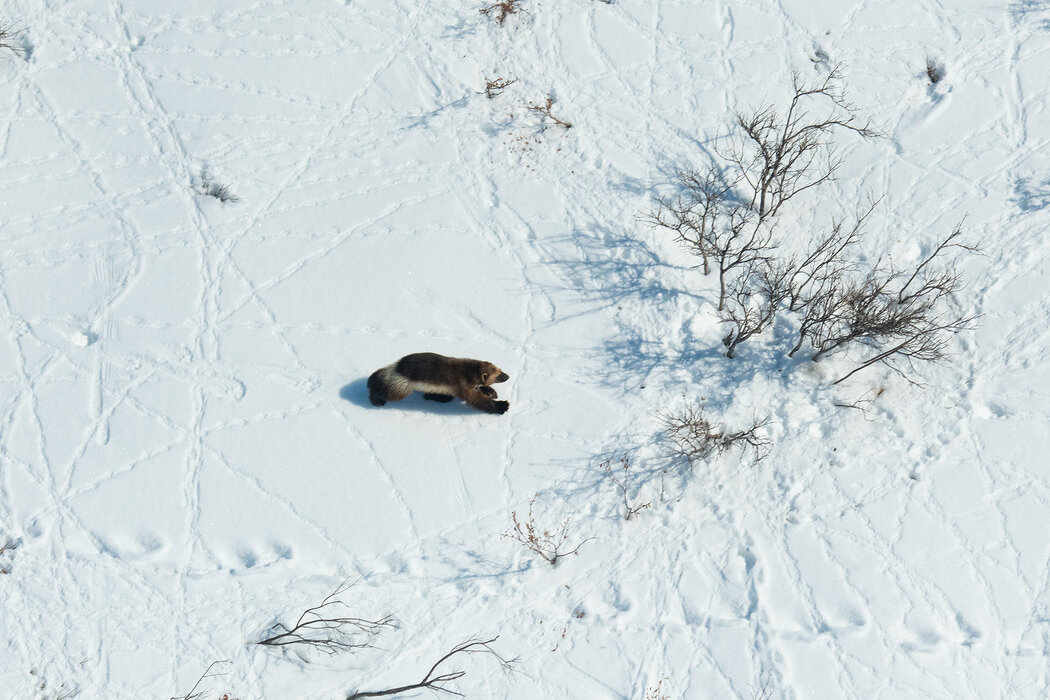 Since 2014, the Wildlife Conservation Society, together with partner groups has been studying Alaska’s wolverines. The goal, says the project coordinator, Tom Glass, a doctoral candidate at the University of Alaska-Fairbanks, is “to understand ecological relationships between this species and the environment in this quickly changing place.”

Over two years 24 animals were trapped, anesthetized and given satellite-tracking collars that transmitted data about their movements and behavior. 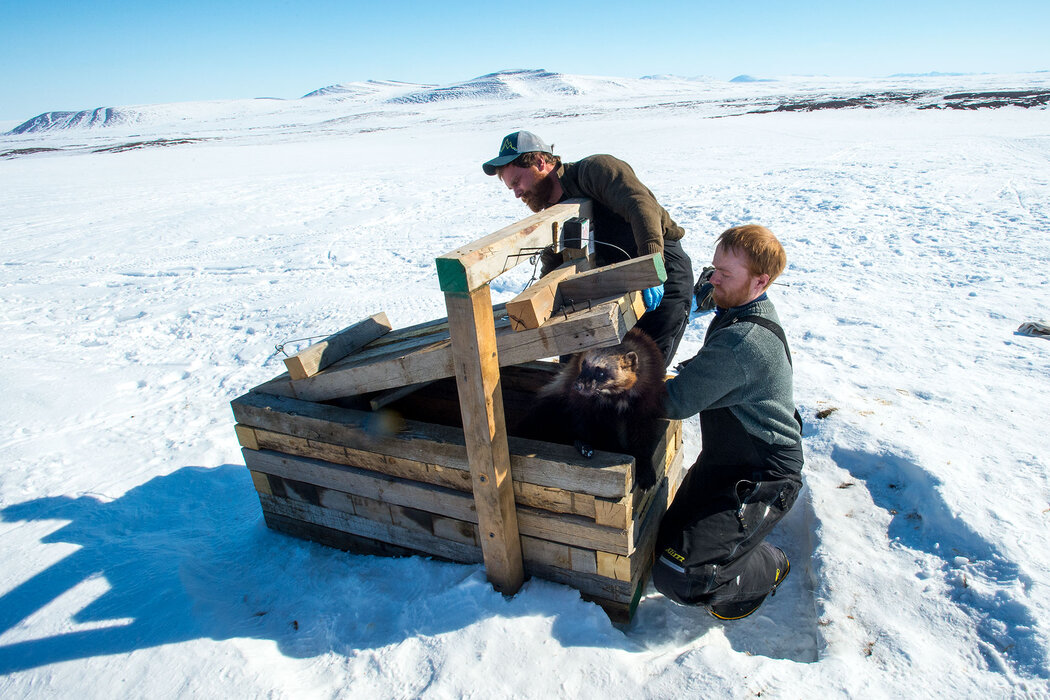 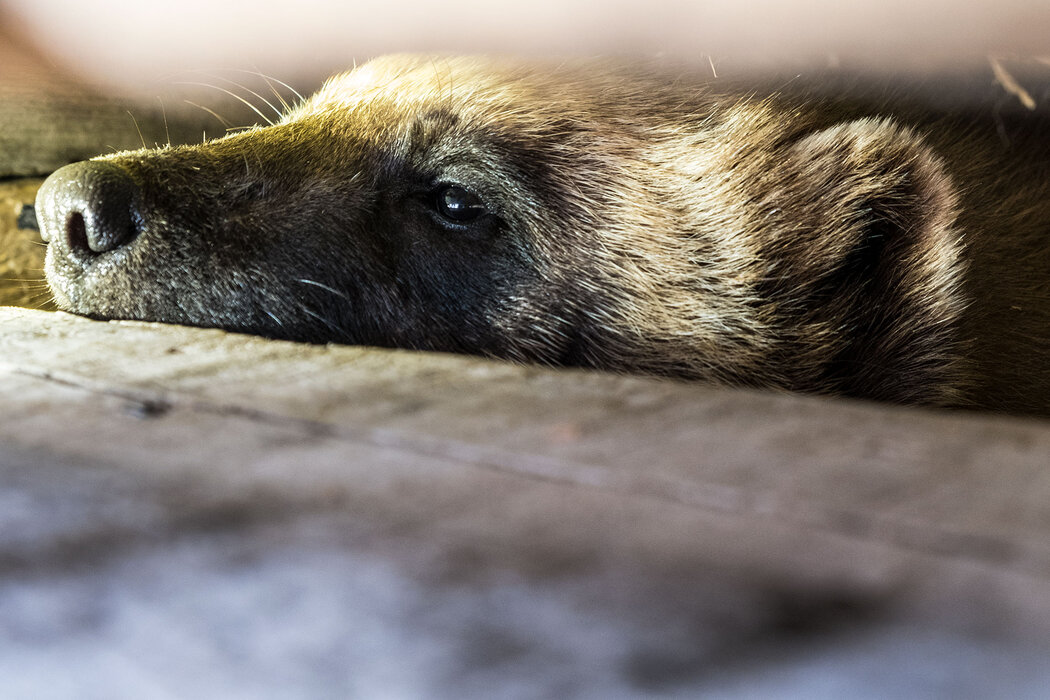 Wolverines can quickly dig dens in the snow, to escape bad weather or predators, or just to rest. Maternal wolverines’ dens are often a complex set of tunnels where they give birth to and nurse their kits. 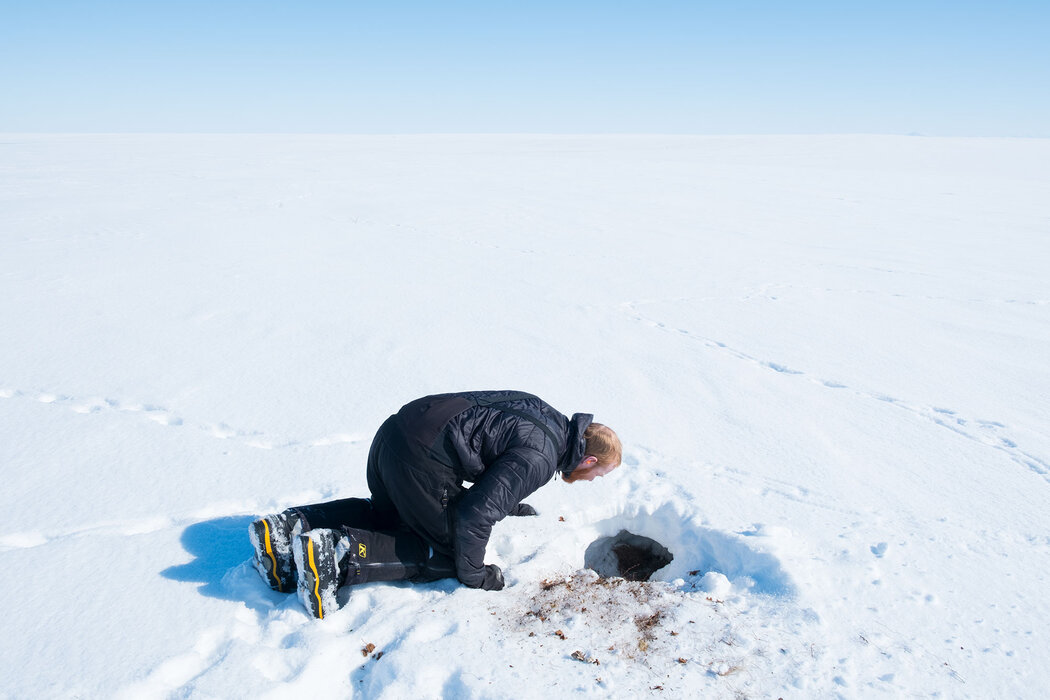 The remains of food in a den may attract other animals after the wolverine is gone, like this curious and hungry grizzly bear. 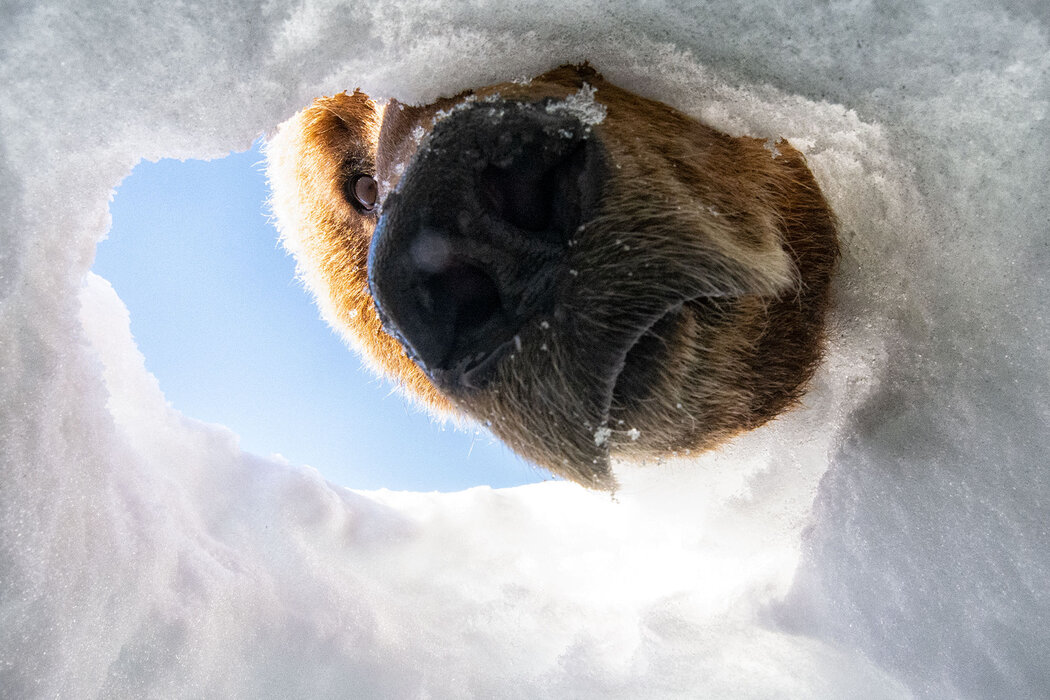 Wolverines were tracked over hundreds of square miles, moving from the Brooks Range and its foothills to the coastal plain. If the satellite link failed, Mr. Glass could locate an animal using a portable radio antenna. 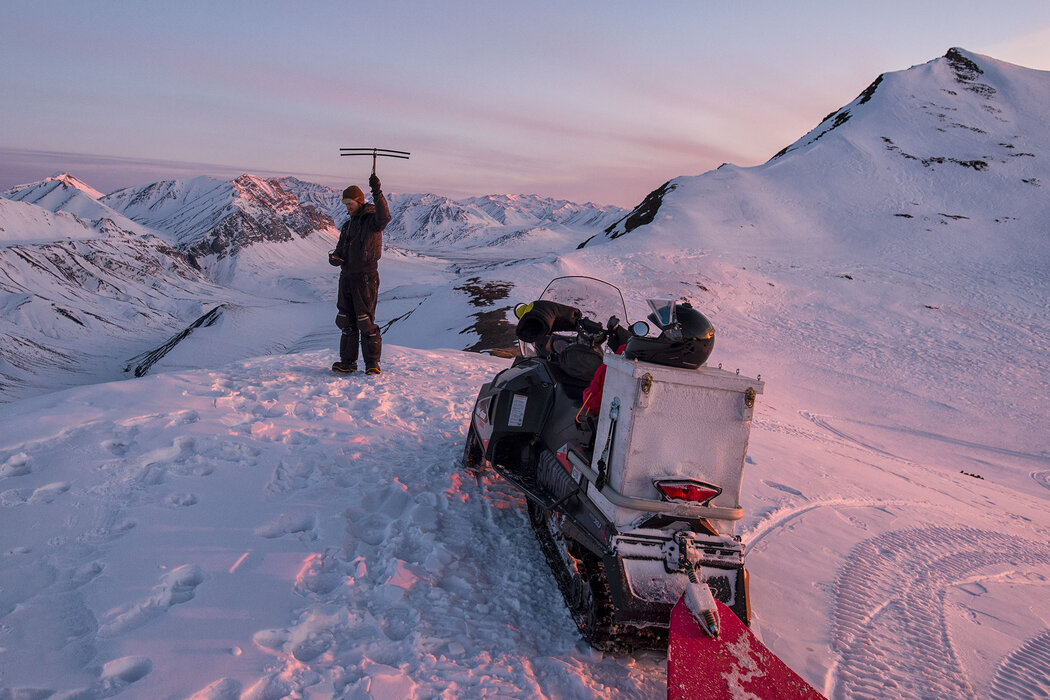 Mr. Glass and an assistant, Matt Kynoch, handled the trapped wolverines after the anesthetic had taken effect, to collar them and take hair and tissue samples. The animals’ teeth become worn down over the years, so photographs provide a rough estimate of age. 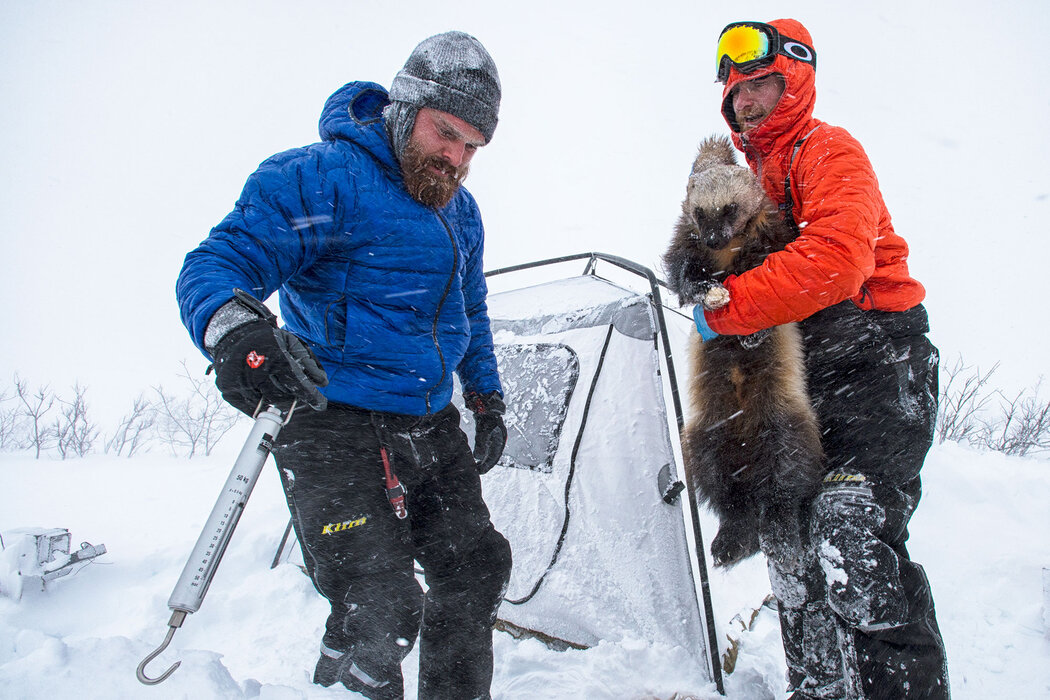 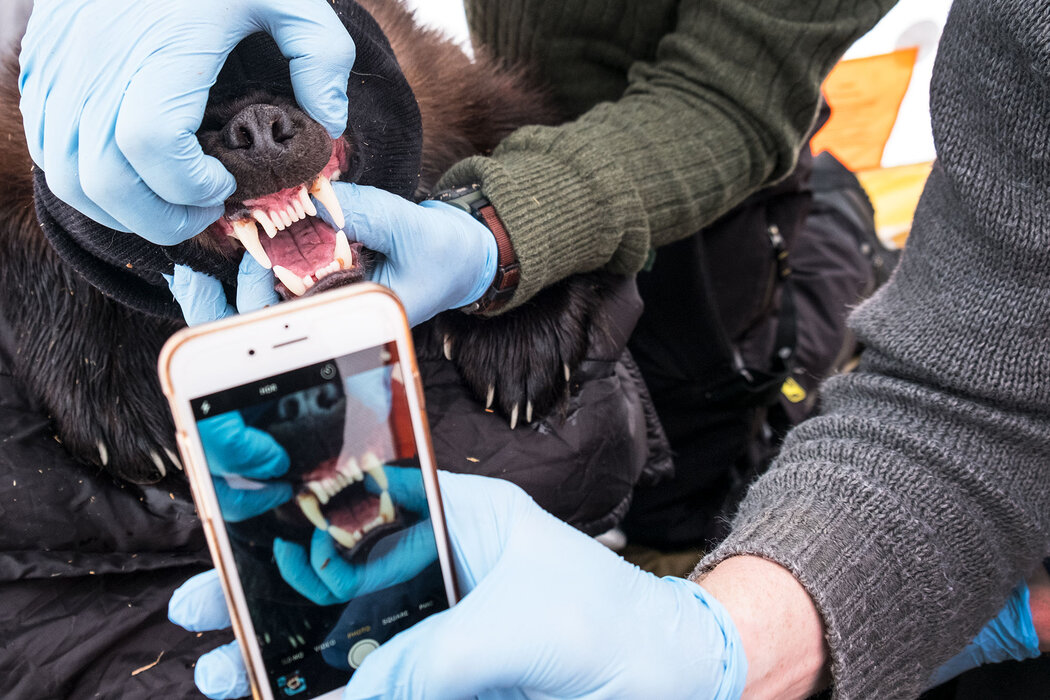 The collar on a wolverine provides data for several months after the animal is released and bounds off into the snow. For the animal’s long-term safety, the collar is designed to separate and drop off after that time. 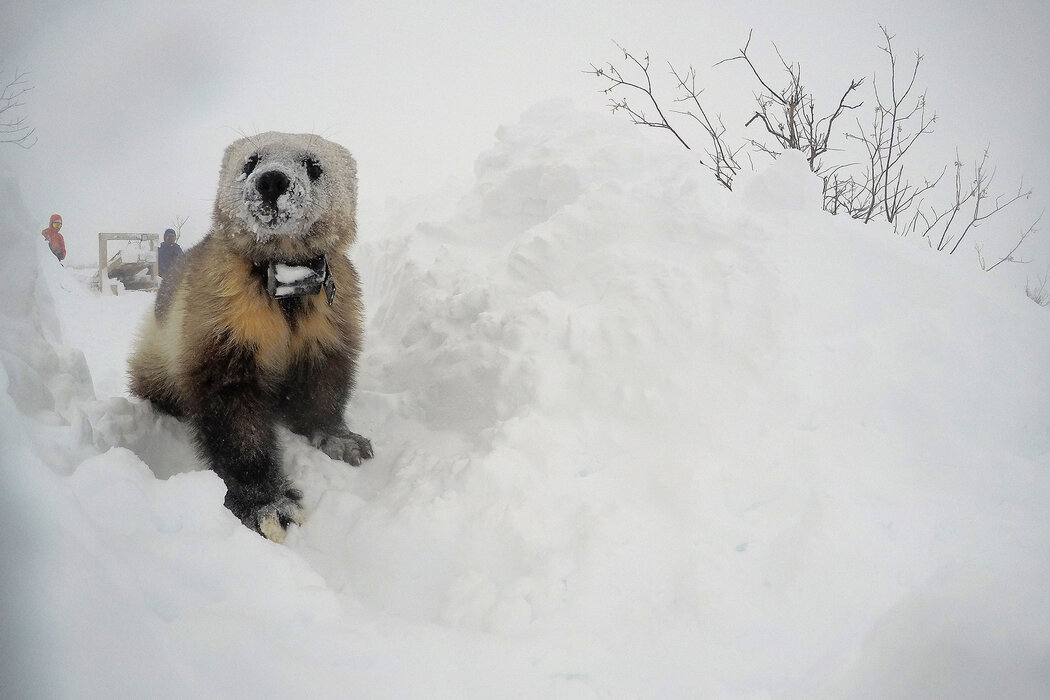 One subject the researchers want to study is whether oil development on the North Slope, like the Trans-Alaska Pipeline, is affecting wolverines. 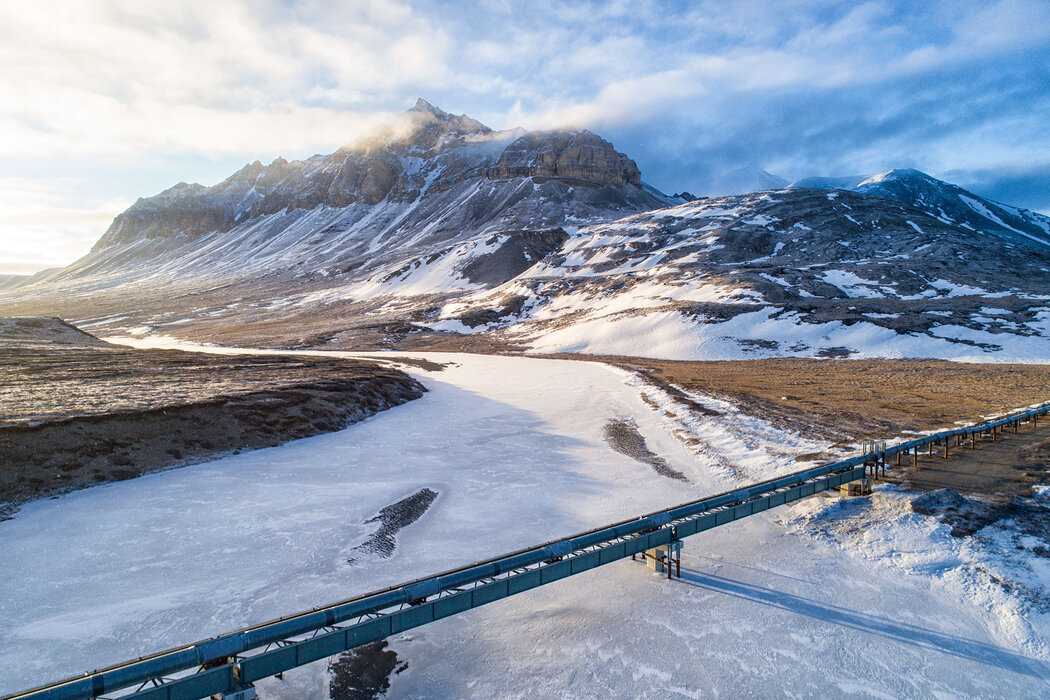 Wolverines have been trapped for centuries by indigenous peoples in the Arctic, who prize the fur. It is difficult to know how stable the population is in Alaska, but over the last half-century the number of animals harvested annually has remained roughly the same.

Wolverine fur is favored for its wicking ability. Used as fringe on parka hood, it helps keep water and ice off the face of Qaiyaan Harcharek, an Inupiat trapper. 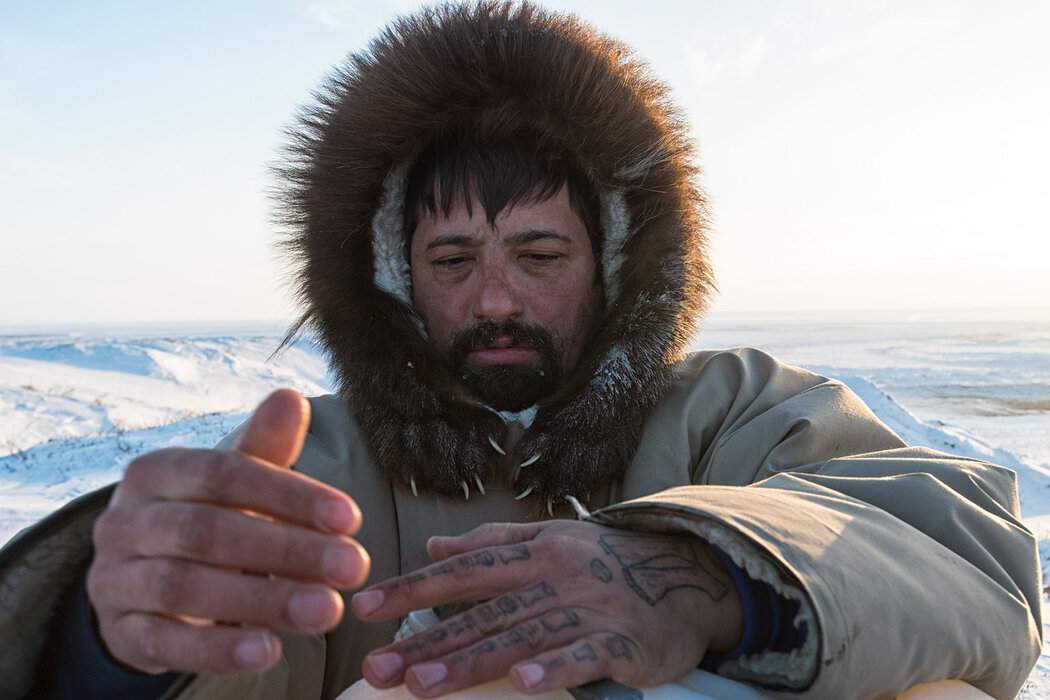 Wolverines have a reputation for being fierce, but that’s only accurate to a degree, Mr. Glass said. “They’re not warm and fuzzy when they’re looking at me from inside of a box trap,” he said. But wolverine family scenes are like those of other species, with the kits playing on the tundra and the mother “trying to get a wink of sleep in while the kits pounce on her.” 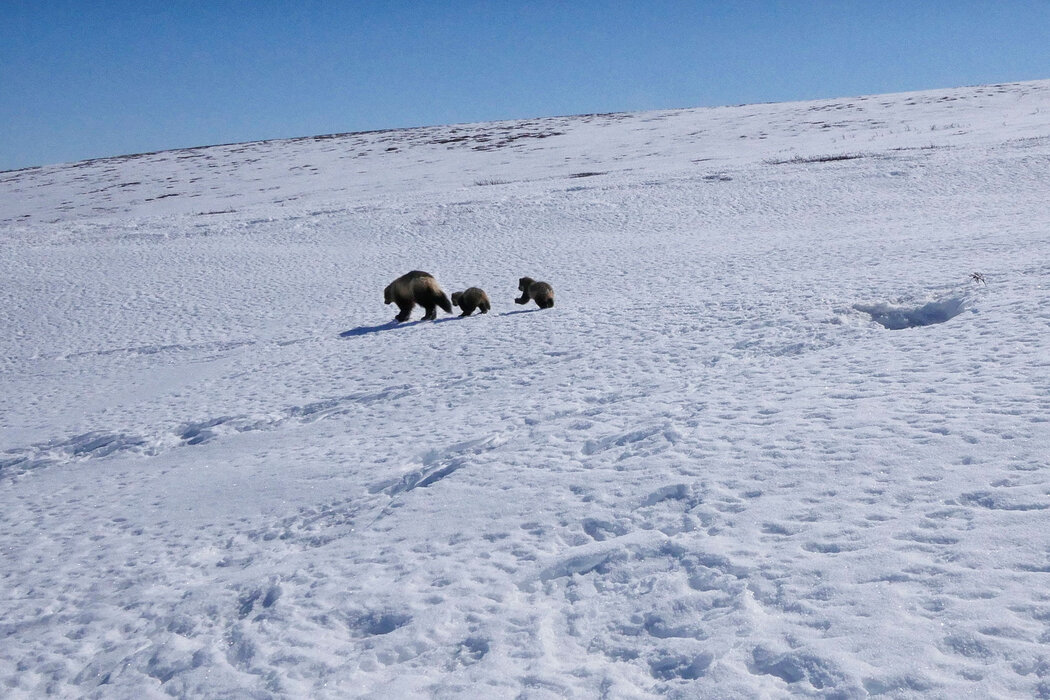 Even after seven years of study, there is still a lot to learn about the animals.

“It still surprises me how little we know about wolverines, in the Arctic in particular,” Mr. Glass said. “We need to understand how wolverine ecology is changing, and identify any areas of conservation concern.” 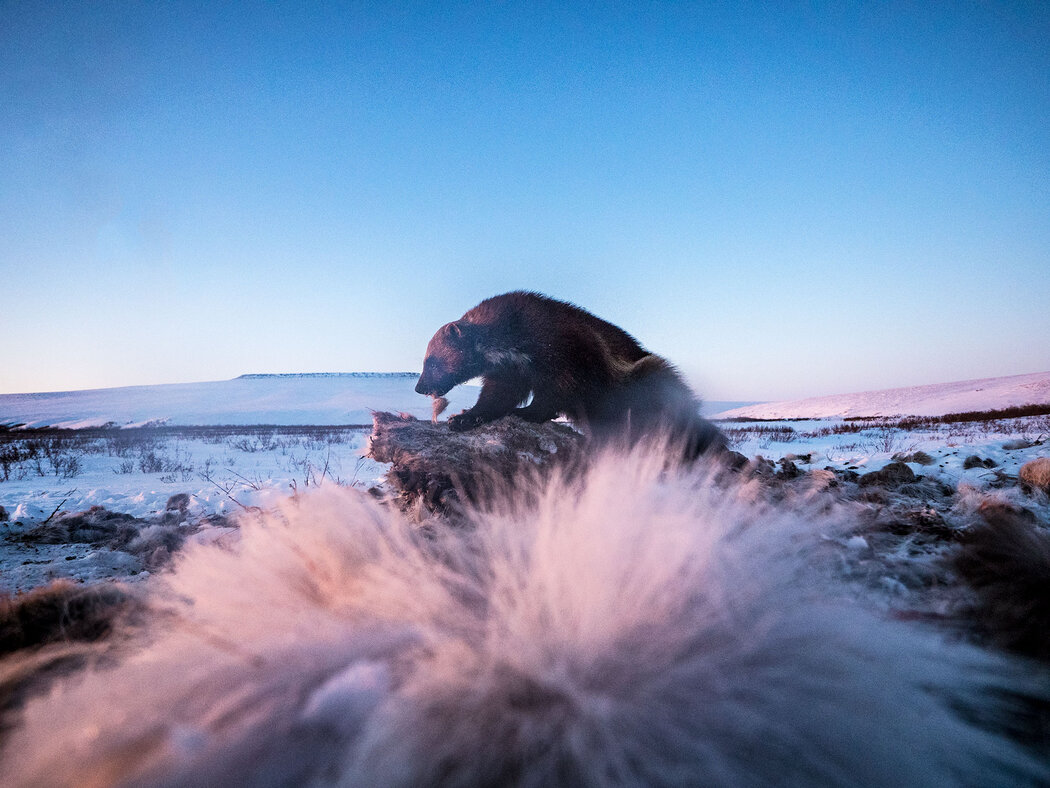 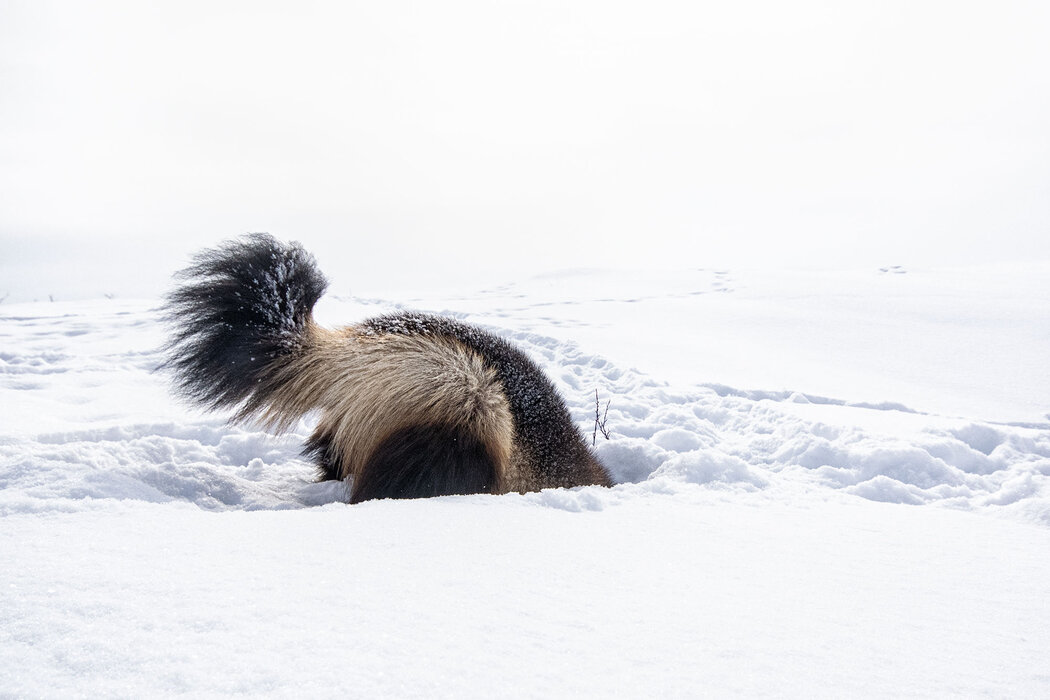 Sea levels are going to rise by at least 20ft. We can do something about it | Climate change 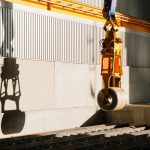 How to Clean Up Steel? Bacteria, Hydrogen and a Lot of Cash.