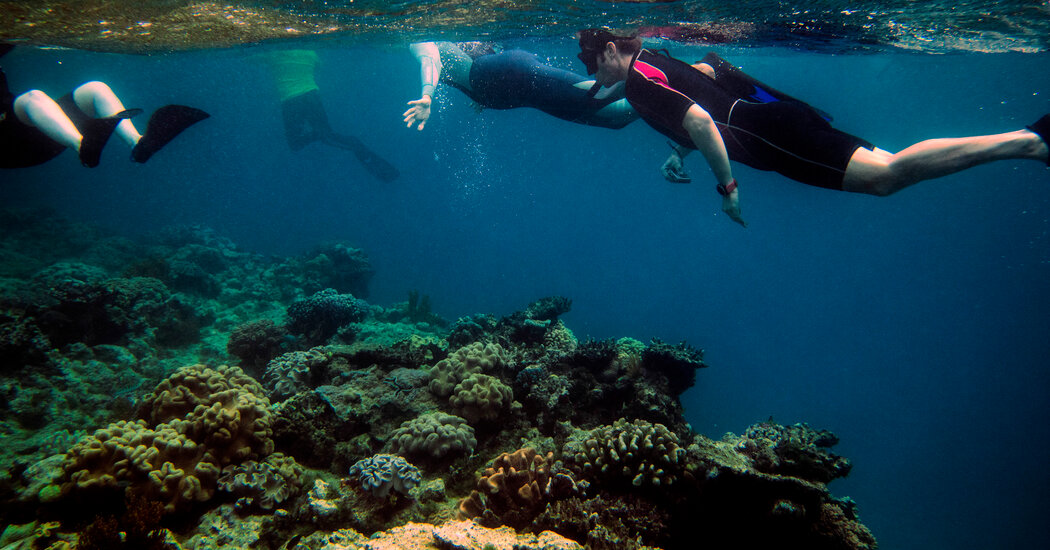 The United Nations has recommended that the Great Barrier Reef be placed on a list of World Heritage sites that are “in danger,” prompting a fierce reaction from the Australian government, which defended its management of one of the country’s top tourist destinations.

The recommendation, made in a report released on Monday by the U.N. Educational, Scientific and Cultural Organization, describes the long-term outlook for the natural wonder as having “deteriorated from poor to very poor” in the past several years.

“There is no possible doubt that the property is facing ascertained danger,” the report says. It calls on Australia to take decisive and immediate action to mitigate the impacts of climate change on the fragile reef, which stretches for 1,430 miles off Australia’s northeast coast and can be seen from space.

Inside Australia, climate activists seized on the UNESCO report to argue that the country’s conservative government, whose intimate ties to the coal industry have long stalled progress on climate change, had been put on notice.

Public support for stronger climate measures has grown steadily since devastating wildfires destroyed large areas of the country’s bush land in 2019 and 2020.

Sarah Hanson-Young, a senator and the environment spokeswoman for the Australian Greens party, said the recommendation was a “warning sign to Australia from a number of other countries that we really have to step up our climate ambitions.”

“We have to do better, and this is just the latest turning of the screws,” she added.

The government, however, rejected any such suggestion. It challenged the decision — a recommendation that will be considered by the United Nations next month — as unfounded, citing Australia’s “world-leading reef management” and its $2.3 billion investment in reef protection.

“This draft recommendation has been made without examining the reef first hand, and without the latest information,” Sussan Ley, Australia’s minister for the environment, said in a statement released on Tuesday, adding that she had expressed her concerns in a call to the director general of UNESCO.

“I made it clear that we will contest this flawed approach, one that has been taken without adequate consultation,” Ms. Ley said. “This sends a poor signal to those nations who are not making the investments in reef protection that we are making.”

Leading conservative politicians claimed that the move had been driven by politics, noting that the 21-nation U.N. committee is currently chaired by China, whose relations with Australia are at their lowest point in years.

Some reef tourism operators also contested UNESCO’s characterization of the reef’s health. They said it retains its pristine beauty despite the threats it faces, and that a perception that it is dying will only further damage tourism, an industry vital to coastal areas.

“People just think, ‘Oh well, go see something else,’” said Scotty Garden, the chief executive of Passions of Paradise, a reef tour company. He added that he and other operators were committed to educating tourists about the challenges the huge ecosystem is confronting.

But scientists said that it had long been clear that the reef was suffering, citing mass coral bleaching events in 2016, 2017 and 2020 that have seriously damaged the ecosystem and its capacity to recover.

“This hasn’t come as a surprise to anyone. For the government to complain they were blindsided and ambushed is a bit cute,” said Jon Day, a senior research fellow at the ARC Center of Excellence for Coral Reef Studies at James Cook University in Townsville, Australia.

“This isn’t just about the reef,” Dr. Day added, noting that climate change was becoming an increasing threat to most World Heritage sites, both natural and cultural.

UNESCO lists World Heritage sites based on criteria that prove their “outstanding universal value.” When these characteristics are threatened, most often by conflict and war, natural disasters, pollution or unchecked development, the council lists the sites as “in danger” in an effort to raise awareness and encourage governments to take action.

Sites listed as endangered have included the Galápagos Islands, some 600 miles off the coast of Ecuador, which were later removed, and the Iranian city of Bam, which was devastated by an earthquake in 2003. If sites are destroyed, they are sometimes removed completely.

In 2015, UNESCO recommended shifting the status of the Great Barrier Reef to “in danger.” But successful lobbying by a conservative-led government, which claimed that the group was engaged in a “misinformation” campaign, stopped the site from being reclassified.

A Reef 2050 Plan instituted that year has since made some commendable strides, according to a government report released in 2019, but ultimately has failed to stop the reef’s decline. The report added that “accelerated action at all possible levels is required to address the threat from climate change.”

Scientists warn that the reef’s future is in serious peril, as it faces compounding threats including rising sea temperatures, diminished water quality from sediment runoff, more powerful cyclones and swarms of crown-of-thorns starfish.

Coral is extremely sensitive to even minor rises in temperature, making it a barometer for the world’s overall progress in stalling global warming.

“Business-as-usual managing of the Great Barrier Reef is not stuff to stop its ongoing decline,” said Terry Hughes, a professor at the ARC Center of Excellence for Coral Reef Studies.

“If we can reach the Paris target, or very close to it, we’ll still have a Barrier Reef,” he said, referring to global climate pledges reached in France in 2015. But, he added, “we’ve got a narrowing window of opportunity.”

A new report suggests sea creatures are fleeing the equator! | First Dog on the Moon