The UK government’s flagship home insulation scheme, intended to kickstart a green recovery from the Covid-19 crisis, has been botched, disastrous in administration, devastating in some of its impacts, and stands in urgent need of rescue, an influential committee of MPs has said.

Their outspoken criticism is a blow to the government’s plans for reaching net zero greenhouse gas emissions, and comes as ministers prepare to host vital UN climate talks – called Cop26 – in Glasgow this November.

There can be little chance of meeting the UK’s target of net zero emissions by 2050 without a comprehensive programme to insulate Britain’s 19m draughty homes and switch from gas boilers to low-CO2 heating, the environmental audit committee of MPs said on Monday.

But they delivered a damning assessment of the green homes grant, launched last summer to offer £1.5bn in subsidies for insulation and low-CO2 heating, and demanded urgent action from ministers. They said the scheme was “rushed in conception and poorly implemented … [the] scheme administration appears nothing short of disastrous”.

They added: “The impact of its botched implementation has had devastating consequences on many of the builders and installers that can do the work, who have been left in limbo as a result of the orders cancelled and time taken to approve applications.”

Far from generating green jobs as the government promised, some businesses offering home upgrades were having to lay off staff because of payment problems.

There were more than 123,000 applications for the grant by the end of February, according to data released last week by the Department for Business, Energy and Industrial Strategy, but only 28,000 vouchers had been issued and only 5,800 measures had been installed.

More than £1bn is estimated to be unspent from the public money allocated to the end of March, which the government now intends to keep back, while allocating only £320m to next year. The environmental audit committee demanded the unspent money should be rolled over instead and the scheme overhauled and turned into a viable long-term grant scheme that would give households and businesses the confidence to embark on renovation work.

Philip Dunne, chair of the committee, said action was urgently needed to avoid further damage to the green homes industry, and start the vital task of refitting the UK’s draughty housing stock.

“Further schemes that endure must be rolled out, boosting the government’s credibility with householders and their contractors, that it is determined to decarbonise the nation’s homes,” he said. “This will give confidence to businesses that they can invest in upskilling and green jobs … Realism needs to be injected into the government. A much better understanding of cost, pace, scale and feasibility of skills development is desperately needed for net zero Britain.”

Ed Matthew, campaigns director at the climate change thinktank E3G, said: “The committee has hit the nail on the head. The industry has been damaged by stop-start schemes and short-term funding, which destroys investment and undermines consumer confidence. The Treasury has to make this the UK’s number-one infrastructure priority and provide the long-term funding it needs. There is no other public investment that can do more to boost jobs while cutting carbon emissions.”

Under the green homes grant, homeowners can apply for vouchers for up to £5,000, or £10,000, to cover most of the cost of installing insulation and other energy efficiency measures, and low-CO2 heat pumps. But the scheme has been dogged with problems from the outset, with builders complaining of the bureaucracy involved in registering for the scheme, while tens of thousands of homeowners have been frustrated in their applications.

The scheme is administered by a company in the US, and the Guardian has found numerous instances of people unable to get a response from customer services, or given conflicting advice, while builders have complained that heat pump installations in particular have been stymied by the rules.

The government has responded by claiming that people are being put off the scheme by fear of having tradespeople in their homes during the pandemic. Campaigners have rejected that claim, saying the 120,000 applications show people want the grants but cannot get them. Home heating accounts for about 14% of the UK’s greenhouse gas emissions.

Jess Ralston, analyst at the Energy and Climate Intelligence Unit thinktank, said it was crucial for the government to act as the UK prepared to host Cop26. She said: “Despite government talking a good game on net zero, it is clear this is failing to manifest into action to cut carbon from our homes. Rushed policies that are chopped and changed seemingly at random risk undermining public enthusiasm for fixing up our leaky homes, damage that could harm future schemes for years to come.” 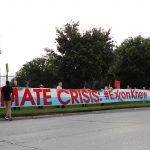 ExxonMobil Shareholders Must Vote for New Leadership—Here’s Why