The UK government has been urged to open up its £11bn pot of climate funding to contraception, as research from low-income countries shows a link between poor access to reproductive health services and environmental damage.

In a letter to Alok Sharma, president of the UN Cop26 climate conference, an alliance of more than 60 NGOs has called for the funding eligibility rules to be changed to allow projects concerned with removing barriers to reproductive healthcare and girls’ education to access climate funds.

Bethan Cobley, a director at MSI Reproductive Choices, one of the organisers of the letter, said: “Billions are allocated now to climate financing, adaptation and resilience. We’re hearing loud and clear from communities and women and our clients who are most affected by the climate crisis that what they really want is access to reproductive healthcare, so that they can make choices about when or whether they have children.”

Campaigners say the government could make the change in the way funds are spent in time for November’s Cop26 in Glasgow. Developing countries where food, healthcare and water supplies are already scarce are the most affected by climate change. Low-income countries have contributed far less to the climate crisis than richer countries.

“Given the recent cuts to the aid budget and the urgency of the climate crisis we need innovative ways to integrate development and climate programming,” says the letter, sent earlier this summer.

“From increased risk of unintended pregnancy to dropping out of school, the communities we work with tell us they are already seeing how climate change impacts them, and that they see the connections between their health and the health of their local environment,” he said.

“It is critical that UK government climate adaptation funding takes this into account. Cop26 is an opportunity to right this wrong.”

A UN Environment Programme earlier this year reported that investment in “community-based family planning” would help in tackling the climate, biodiversity and pollution crises and was crucial if women are to take up leadership roles as communities adapt.

Prof Susannah Mayhew, of the London School of Hygiene & Tropical Medicine, said the connection, though “not intuitive” to people in the west, was obvious to those in affected communities, where “the thing you need to underpin [sustainable living] is the ability to control your own fertility as an individual woman”.

“People who are being affected by climate change, and who have very poor access to quality health services, understand the connections much more than we do,” she said.

It was “absolutely critical” that the government allow climate funding to flow to reproductive health programmes, she added.

Mayhew, who is part of a team of researchers on a Margaret Pyke Trust project in the Rukiga district of Uganda, said: “What women seem to be wanting is to have better spaced and healthier children so that they can be economically active and plan for good-quality futures for their children that don’t lead to increasing pressures on farmland and bad livelihood practices, which comes with lack of education, so that they’re able to live locally in a more sustainable way through having less pressure on land.”

Richard Muhumuza, another of the researchers on the programme, which is partly funded by the UK Department for Environment, Food and Rural Affairs, said people he had spoken to in Rukiga were clear about what having poor access to family planning meant for their lives and environment. The wetlands of south-west Uganda are vital both for people and the national bird – the endangered grey crowned crane – but are under intense pressure from unpredictable weather patterns and unsustainable agricultural practices.

“‘Ignorance’ and ‘family planning’ were the reasons for environmental degradation, people in Rukiga told us,” said Muhumuza, of the ’s Uganda Research Unit. “They made a link between the support and education women get through accessing family planning services and having fewer children, and tackling the effects of a changing climate.”

One farmer quoted in the study’s preliminary findings said: “I thank those who brought family planning. I thank them so much because if they didn’t introduce it we would have delivered and got tired.

“We are already tired with the children that we have and [then] you find out that you are carrying another pregnancy to increase the number.”

A Foreign, Commonwealth and Development Office spokesperson said: “The UK is a global leader on both gender equality and tackling climate change. It is clear that supporting women, including through family planning and girls’ education, helps communities to adapt and be more resilient to climate change. That’s why we are making sure our international climate finance is responsive to gender-based issues and we are using our Cop26 presidency to call on others to do the same.”

The British government says it has allocated £11.6bn for international climate finance over the next five years. Campaigners say much of that has come from the slashed overseas aid budget. An Oxfam spokesperson likened it to “your bailiff leaving a bunch of flowers”.

According to the Guttmacher Institute, a pro-choice research organisation in the US, meeting the global unmet need for contraception would cost an estimated $770m (£565m) annually, or $548m more than current costs. 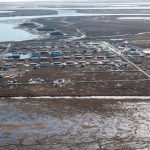