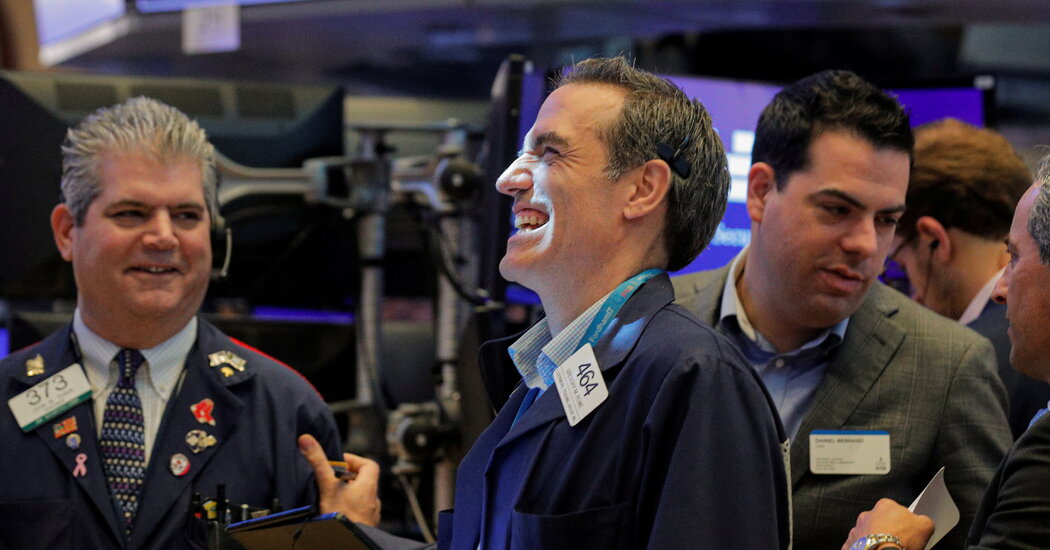 After closing the books on the second quarter, executives are the most positive they have ever been about the profits their companies are generating, according to data from FactSet. And that might be a good sign that bottom-line growth will continue even after the expected rebound from the pandemic economic plunge.

Profits are soaring, for now. Analysts predict that earnings for companies in the S&P 500 rose more than 60 percent in the second quarter compared with last year. That would be the strongest growth in more than 10 years, but it’s less impressive than it sounds. Almost all of the growth is a result of the reopening of the economy as well as the fact that the same period a year ago was the depth of pandemic lockdowns.

Will earnings continue to rise after the initial reopening? Some soft economic data recently spooked the market, and analysts expect corporate profits to moderate in the coming quarters. Still, the jump in S&P 500 earnings for the full year is expected to rival the strongest in recent history. And business leaders seem confident that their companies are coming out of the pandemic in much better shape than expected (although they tend to be a glass-half-full bunch).

The G20 signs on to a global tax overhaul. Finance ministers from the group backed efforts to create a global minimum tax rate of 15 percent and impose new levies on multinationals. But there’s a long road ahead, as lawmakers in the U.S. and elsewhere debate the specifics.

Worldwide concern grows about coronavirus variants. New strains like Delta, which are continuing to spread quickly, could threaten the global economic recovery, G20 officials said. In positive news, researchers are increasingly encouraged by breath tests that can detect Covid-19.

Texas Republicans advance new voting restrictions. Lawmakers moved forward with an overhaul of the state’s voting laws at a special legislative session. Democrats, who have criticized the proposals as efforts to disenfranchise minority voters, are preparing to fight but have limited options; all eyes are on Texas-based companies to see if they will make statements about the measures.

Goldman Sachs wrestles with whether to raise pay for junior bankers. Executives at the Wall Street giant are debating the wisdom of increasing compensation to address complaints about burnout, The Financial Times reports, even as rivals have raised salaries. The argument against: It would set a “dangerous precedent” and erode the idea of paying for performance.

After years of cajoling corporations to do more to fight climate change, Larry Fink has new targets in his quest to make the economy more sustainable. The BlackRock chief, who spoke on Sunday at the G20 summit, said the World Bank and the International Monetary Fund needed to “rethink their roles.”

The World Bank and I.M.F. should act more like Fannie Mae and Freddie Mac, Fink said, and less like traditional lenders. Guarantees by the institutions could lead to huge additional investments in green technologies in emerging markets. For example, the U.S. government guarantee of mortgage insurers led to a $11 trillion market for home loans.

It’s a very big idea. Critics will say that the primary beneficiaries of the proposal would be large investors like BlackRock that would shield themselves from losses. (For the idea to fly, investors would also have to share some of their investment gains with the institutions.) Fink sometimes gets called out as being too incremental in his approach, but what he suggested would fundamentally change the function of the World Bank and the I.M.F., as well as reshape the role of governments in combating climate change.

Companies can’t do this alone. Fink has long pushed for the corporate sector to take the lead on climate initiatives, doing more than most to put the environment on boardroom agendas. Now that he is criticizing governments and other official institutions as not pulling their weight when it comes to climate change, saying that even the world’s largest multinationals and investment firms can’t tackle this on their own, it warrants watching.

The dawning of space tourism

The race is on for companies to take paying customers to the stars, now that Richard Branson can call himself an astronaut.

“The whole thing was magical,” Branson said after his flight to the edge of space yesterday aboard a Virgin Galactic rocket plane. On hand to cheer him on at the New Mexico spaceport was fellow space-minded billionaire Elon Musk. Blue Origin’s Jeff Bezos, who is set to ride in his own company’s rocket next week, had wished Branson “a successful and safe flight.” (Blue Origin also cheekily noted that its passengers, unlike Virgin Galactic’s, would fly above the internationally accepted boundary of space.)

The business of leisure spaceflight is still a ways off. While Virgin Galactic’s craft demonstrated its safety, more tests are needed before the company formally opens for business — at a cost of $250,000 per ticket. It’s not clear when Blue Origin will take on paying customers, beyond the person who bid $28 million to fly with Bezos on July 20.

“Mr. Bezos is worth $200 billion and now he wants to get a spaceship. That’s very nice. That’s what this legislation is about, Maureen.”

— Senator Bernie Sanders, in an interview with the Times Opinion columnist Maureen Dowd about his priorities for addressing inequality. “You have the richest guys in the world who are not particularly worried about earth anymore,” he added.

A new type of bond could revive ailing medical science

Scientists translating basic research into treatments for disease increasingly have to think like venture capitalists, or risk their ideas languishing in what’s called the “valley of death.” They may soon have a new way to finance the journey from initial discoveries to clinical trials with BioBonds, DealBook’s Ephrat Livni reports for The Times.

BioBonds would create low-interest, government-backed loans for “translational” research. These would be packaged into a bond and sold on the secondary market for risk-averse institutional investors like pension funds. In May, Representatives Bobby Rush, Democrat of Illinois, and Brian Fitzpatrick, Republican of Pennsylvania, introduced legislation that would create $30 billion worth of these loans over three years, helping to fund F.D.A.-approved clinical trials.

The pandemic dug the research funding hole “a whole lot deeper,” said Karen Petrou, a co-founder and managing partner of Federal Financial Analytics, a consulting firm in Washington that devised BioBonds. Last year, clinical trials were halted, resources were diverted from labs, attention was focused on immediate needs and a lot of funding dried up. But without the initial efforts of academic labs, it would have been impossible for pharmaceutical companies to fast-track Covid vaccine development.

“We needed an American model,” Petrou said. Many countries support private-sector funding for biomedical research, and each does it differently. Petrou, who suffers from retinal degeneration and became blind in her 40s, discovered the funding struggles for researchers in 2013 while trying to raise money for studies on her condition. Potential investors said such projects were too speculative. She refused to accept that as a final answer.

Green bonds are the inspiration, having created a $750 billion private market in sustainability projects via publicly backed loans. BioBonds offer a “lifeline” for medical research, said Dr. Attila Seyhan, the director of translational oncology operations at Brown University and a former Pfizer scientist. While the loans must be repaid, he believes that university business units, which are already working with scientists on commercializing projects, will find creative ways to make them work. Even if only 1 percent of bets pay off, he said, it’s still worthwhile: “This is how drug development works.”

Read the full story about BioBonds.

Best of the rest

We’d like your feedback! Please email thoughts and suggestions to dealbook@nytimes.com.

The prize for Australia’s post-Covid restoration is large. But fairness must be integral | Australian economy