The air in urban areas can be up to 3C (5.4F) warmer than in the surrounding countryside, known as the urban heat island effect. But less well known is that urban heating also warms the ground, and could be used to help combat the climate crisis.

A lot of this extra urban heat goes into the ground from basements, underground car parks, heat from sewers and much else, and a pioneering scheme in Cardiff is tapping into this subterranean heat. The Welsh capital has dozens of boreholes about 10 metres deep filled with groundwater, and a survey by the British Geological Survey (BGS) found that between September and December water in these boreholes can reach 16C while water nearer the surface can be close to or below freezing.

This warmth can be tapped using ground source pumps to use for heating homes and other buildings; in one trial a heat pump was installed in a borehole at a nursery school in Cardiff, and the nursery now only needs to turn on its gas heating on the very coldest of days.

The BGS study also showed the potential for using the shallow groundwaters beneath Cardiff to generate about a quarter of the city’s heating needs. Many other towns and cities also sit on shallow groundwaters, and similar schemes could exploit this heat to reduce their carbon emissions. 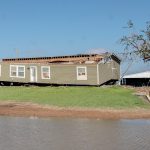