What is the EU doing?

In 2019 the European parliament declared a “climate and environmental emergency”. In 2020 EU leaders pledged to cut greenhouse gas emissions by 55% by the end of this decade. Now comes the hard part: turning promises into policies to curb dangerous global heating.

On Wednesday, the European Commission published a dozen legislative proposals to ensure its climate and energy laws fit the ambition of a 55% cut in emissions by 2030, compared with 1990 levels. From phasing out the internal combustion engine to forest protection, no sector of the EU economy will go untouched.

What are the main proposals?

Does it all add up?

While the head of the European Commission, Ursula von der Leyen, has insisted the whole plan rests on scientific advice, green campaigners have a different interpretation of what science demands. Many NGOs and green politicians wanted a target of 65% or 70%. Greenpeace derided the EU announcements as “a fireworks display over a rubbish dump”.

Campaigners are also worried about “accounting tricks”, such as the freedom for EU member states to use offsets – buying emissions reduction credits from a better performing country – rather than do the hard work at home. Greens are also alarmed by what they see as failure to close a big loophole. Campaigners say not enough has been done to stop forests being chopped down for fuel, an outcome that has the perverse effect of increasing greenhouse gas emissions and destroying nature.

If the plans succeed, cars will become less polluting. Emissions standards for cars and vans will be tightened, with the production of diesel and petrol-powered cars consigned to history by 2035. Electric charging points should be more widespread, in theory every 60km on main roads.

People should get more help to insulate their homes and buy green vehicles, through the EU “social climate fund”. National governments would have to help finance the fund and organise the programmes.

Critics argue that Brussels is risking a backlash from low and middle income earners who depend on cars, in a potential repeat of the confrontation between the French president, Emmanuel Macron, and the gilets jaunes (yellow vests) protesters over fuel taxes. One analysis has suggested the commission proposals could add an extra €429 to average household energy bills, and €373 increase in driving costs.

How will this affect the rest of the world?

The plan to hit polluting imports with a special carbon levy is the measure most likely to attract attention from China, the US, Australia and other countries importing polluting products into the EU. The plan – a carbon border adjustment mechanism – means from 2026 companies would have to buy allowances to sell certain carbon-intensive products in the EU, including iron and steel, fertilisers and aluminium. The intention is to put foreign imports on a level playing field with European companies, who have long protested about “carbon leakage”, for example EU steel producers losing market share to more lightly regulated rivals outside the EU, without any overall diminution in total emissions.

EU officials are confident they can avoid retaliation at the World Trade Organization, because they say the scheme targets companies, not countries. The levy is based on the amount of CO2 in a product, giving companies an incentive to move to greener production.

Foreign countries may also protest against plans to include large ships docking at EU ports into an emissions trading system.

Expect a frenzy of lobbying as campaigners, business groups and non-EU countries seek to toughen up, water down and throw out proposals they do not like. Most big companies have now endorsed the EU goal of net zero emissions by 2050, but support becomes significantly weaker when that means taking action in the next decade, according to analysis by the UK-based thinktank Influence Map. Their analysis of 216 industry groups showed that only 36% supported the goal of cutting emissions by 55% by 2030.

“The days of punching the air and saying let’s go to zero carbon in 2050… … are ending now,” said former senior EU official Peter Vis. “It is not the grand declarations that are going to be the emphasis from this point on, it’s the hard choices that go with it.” 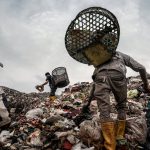 Countries Tried to Curb Trade in Plastic Waste. The U.S. Is Shipping More.