Firefighters made progress battling some of the largest fires burning across the west, but dangers of flare-ups and new ignitions remain amid hot, dry conditions that will bake the parched landscape.

Nine large fires have collectively burned more than 1.8m acres in 12 states, the National Interagency Fire Center reported on Monday morning, including 23 in Montana, some of which have displayed extreme fire behavior.

On Sunday, the agency issued its monthly outlook, forecasting “significant wildland fire potential” with more than 95% of the American west in drought and more than half of the region in the two highest categories of drought conditions, and hotter than normal weather expected to continue into the autumn.

But officials in Oregon had good news to share on Monday about the Bootleg fire, which has already torched an estimated 413,762 acres (167,407 hectares) – an area larger than New York City – with containment reaching 84%.

“That reflects several good days of work on the ground where crews have been able to reinforce and build additional containment lines,” fire spokesman Al Nash said.

The fire has been burning in the Fremont-Winema national forest since being sparked by lightning on 6 July . Firefighters initially believed they would not be able to rein it in until heavier rains came in the autumn.

Some evacuation orders were also lifted near California’s Dixie fire, which had burned through 248,820 acres over the last 19 days, with 35% containment, but officials warned local residents to remain on alert.

Authorities warned that with unpredictable winds and extremely dry fuels, the risk of flare-ups remained high. Sixty-seven homes and other structures have already been destroyed in the fire, with nine others damaged. The cause of the blaze is still under investigation, but is believed to have been caused by equipment belonging to the utility Pacific Gas & Electric.

Risky conditions are also expected in southern California through the beginning of the week, with spiking temperatures, low humidity, and onshore winds forecast.

In recent days, lightning sparked two wildfires that threatened remote homes in the Shasta-Trinity national forest. Evacuation warnings remained in place on Sunday for communities along the Trinity river.

In Montana, a wind-driven wildfire destroyed more than a dozen homes, outbuildings and other structures, authorities said on Sunday. Evacuations were ordered after flames jumped a highway and moved toward communities near Flathead Lake in the north-western part of the state. Crews also battled major blazes in north-east Washington and northern Idaho.

Dry conditions and powerful winds made for dangerous fire conditions in Hawaii. A wind advisory was issued on Sunday for portions of Lanai, Maui and the Big Island.

A fast-moving wildfire on Hawaii’s Big Island grew to 40,000 acres, prompting mandatory evacuation orders. Those orders – which forced thousands of residents out of their homes – were lifted on Sunday evening. However, authorities told residents to remain alert.

“County officials ask all residents of the affected areas to only return home if absolutely necessary,” the Hawaii county spokesperson Cyrus Johnasen said in a statement. “Smoke and other conditions may make returns unsafe for those with prior and underlying respiratory conditions.”

On Friday, Joe Biden and Kamala Harris held a virtual meeting with governors to discuss the fires.

“We’ve got big, complex wildfires burning across multiple areas,” Biden said during the meeting, noting that more help was needed, especially due to challenges still arising from supply-chain issues caused by Covid. “We can’t ignore how the overlapping and intertwined factors of extreme heat, prolonged drought, and supercharged wildfire conditions are affecting the country,” he added.

A historic drought and recent heatwaves tied to the climate crisis have made wildfires harder to fight in the American west. Scientists say climate breakdown has made the region much warmer and drier in the past 30 years and will continue to make weather more extreme and wildfires more frequent and destructive.

The US Drought Monitor reported last week that while a robust monsoon has delivered drought-easing rainfall to the south-west, critically dry conditions persist across northern California and the northwest, where there has been an expansion of “exceptional drought”, the worst category.

The wildfires are also affecting regions further afield. Numerous areas of the US west and midwest were under air quality alerts on Sunday as wildfire smoke lingered over much of the country.

Alerts were in place across much of the northern US Rockies, including portions of Colorado, Wyoming, Washington state and Idaho. Further to the east, smoke from fires burning into Canada triggered pollution alerts in Wisconsin, Minnesota and Iowa.

Wildfires emit huge volumes of microscopic smoke particles that researchers say can be harmful if breathed in and lead to both immediate and long-term health impacts. Children, older people and people with underlying health conditions are particularly at risk.

Recent studies have shown that the smoke is even more toxic than previously believed and can exact a heavy toll far from the flames.

“No one is protected,” the Stanford University health researcher Dr Mary Prunicki told the Guardian in July. Her research has shown sharp increases in hospitalizations associated with the blackened air, including for strokes, heart attacks, and respiratory infections. “We don’t actually know what we’re being exposed to,” she added, “and we should be looking at it more.” 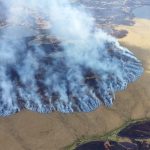 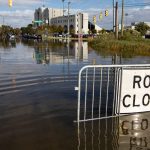