Eleven metres under the sea at Bouldnor Cliff, off the Isle of Wight, is a revealing archaeological site where our ancestors lived 8,000 years ago. The finds, which divers discovered when a lobster excavated flint tools from a burrow, include a large number of wooden objects that showed early settlers made platforms next to the sea and built boats.

The wood, which survived only because of waterlogged anaerobic conditions, is fast disappearing because of tidal erosion. The finds also give insight into diets including burnt hazelnuts and show wheat arrived in Britain 2,000 years earlier than previously thought.

This was a time when Britain was still part of the continent and the Channel an inhabited valley. Sea levels were rising sharply as the huge ice sheets from the ice age melted.

After millennia of stability, sea levels are rising again and we are losing glaciers and ice sheets ever faster in response to heating of the atmosphere caused by humans. Scientists are discussing whether the rise will be one or two metres this century.

If there are still marine archaeologists in another 8,000 years, living on what will be a much smaller island and looking for our former coastline, they will not have to search so hard for our civilization – it will be marked by layers of plastic. 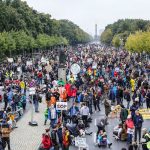