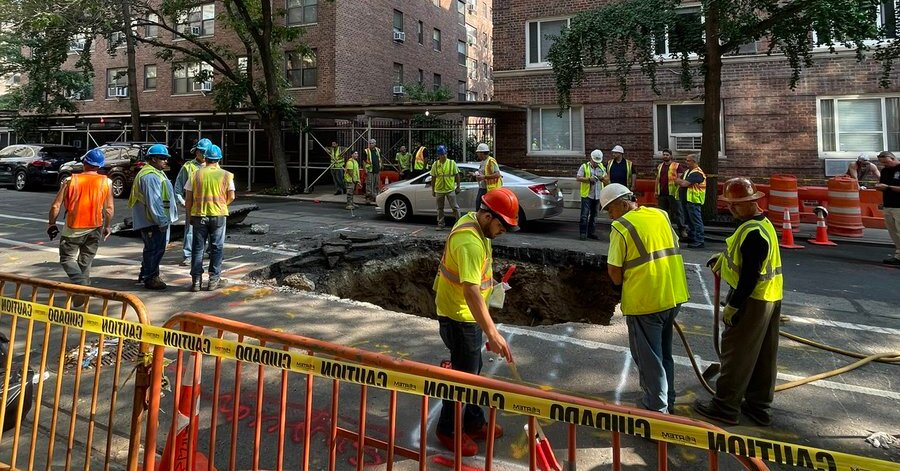 According to Terry West, professor emeritus of engineering geology at Purdue University, urban sinkholes start when sand and gravel under the pavement erodes, usually because of an underground leak.

As soil breaks down, a chasm under the road grows until the pavement collapses. The process usually takes years, Professor West said, but heavy storms like the ones that have hit New York City in recent weeks can accelerate the decay.

“If there’s a lot of water going down into the pavement, it might increase the rate that it gets carried away,” he said.

Jonathan Bowles, the executive director of Center for an Urban Future, a research institute focused on economic policy, said New York had made progress in improving its infrastructure in recent years, repairing water mains and repaving roads, among other measures.

But the current pace is “not enough” to overhaul what has long been in a state of disrepair, Mr. Bowles said. The rate of road resurfacing has improved, he said, but the city has fallen behind on structural repairs like maintaining and rebuilding the streets’ foundations.

“A good amount of the core infrastructure of our streets hails from the first half of the 20th century,” he said. “The city is really playing catch-up.”

It will take billions of dollars to address all of the city’s infrastructure needs, Mr. Bowles said, from renovating public housing to modernizing subway signals to shoring up the streets. And those streets were not built for the heavy storms and rainfall that are occurring more often, he said.

“I think that extreme damages, extreme failings with our infrastructure, are becoming more common,” he said. “It doesn’t mean that there’s going to be a sinkhole every month,” he added, but the infrastructure has become “extremely vulnerable.”

Australia ‘lagging at the back of the pack’ of OECD countries on climate action, analysis finds | Environment