Research led by Victoria’s Country Fire Authority has found the climate crisis is increasing the number of high-risk fire days and could result in “significant change” in the timing of the state’s bushfire season.

The state’s volunteer fire agency worked with researchers from Monash University and US institutes, on the research which projected a rise in both the average fire danger and the number of extreme fire danger days across the state.

Published in the International Journal of Wildland Fire, it used 12 models to forecast fire risk in Victoria to the end of the century, under both intermediate and high greenhouse gas emissions scenarios.

Under an intermediate emissions scenario, which is based on current trends with emissions peaking globally in 2040 before dropping, the modelling showed increases in Forest Fire Danger Index scores in parts of Victoria. In the state’s south-east there was a 20% increase to the danger index.

The index takes into account temperature, relative humidity, wind and drought in determining fire risk, with a score of 25 considered a “very high” fire risk day.

In the intermediate emissions projection, the researchers found daily fire danger ratings were “highly likely to increase from October to January” towards the middle of the century, “indicating a significant change in the timing of the fire season over Victoria”.

By the end of the century, the modelling predicted a 66% increase in the number of “very high” fire risk days in Wangaratta – to 29 days yearly – in the state’s north east.

Dr Sarah Harris, research and development manager at the CFA and one of the study’s co-authors, said the projections pointed to future reductions in rain and relative humidity, particularly in spring and early summer.

Under a worst-case climate crisis scenario, in which greenhouse gas emissions continue to rise throughout this century, the CFA modelling showed increases between 10% and 20% in fire danger index scores across Victoria, with the greatest change projected in the north-west of the state.

Under the high emissions scenario, the researchers projected the number of “very high” fire risk days could increase by up to 200% across five areas of Victoria.

“We already understand that [climate change] is a significant risk,” Harris said. “CFA is looking at ways to understand our risk but also what we might have to do to adapt and mitigate.”

Harris said the organisation planned to analyse the effects of climate change on vegetation and fuel loads, as well as what resourcing measures would be required to adequately respond to an increase in extreme fire weather days.

The study did not look at changes in fire weather risk in a lower emissions scenario, such as that which would limit warming to 1.5 C as per the Paris climate agreement, as there was insufficient modelling available.

The analysis comes as a separate study by Australian National University researchers has linked logged forests to increased risk of severe fire in rural and regional towns.

Published in the journal Ecosphere, the research into fire severity in southeastern Australia found that “forests managed for timber production near settlements may be at increased risk of high-severity fire”.

“Policies to maintain cover of older forest near settlements should be considered,” the researchers concluded.

‘When disaster strikes, you have to help’: the volunteers in a global crisis | Climate change 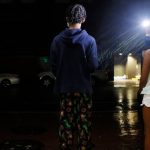