The Coalition handed three grants for fracking in the Beetaloo Basin to a political donor and Liberal-linked company, which had earlier lobbied federal ministers for information on the funding scheme.

On Wednesday, resources minister Keith Pitt announced that Imperial Oil and Gas, a subsidiary of Empire Energy, would receive $21m in grants through the $50m Beetaloo Cooperative Drilling Program.

The three grants are the first to be awarded through the program and will fund the drilling of three wells in the basin’s east, which the Coalition wants to open up for gas exploration as part of its “gas-led recovery” plan.

Environmental groups 350.org Australia and Lock the Gate immediately condemned the awarding of the grants to Empire, saying the firm is linked to the Liberal party and has made significant donations to both sides of Northern Territory politics before the territory’s last election.

Empire is chaired by Paul Espie, who has been described in parliament as a doyen of the Liberal party. Espie is the current chair of the Liberal-aligned Menzies Research Centre. There is no suggestion of wrongdoing by Espie.

350.org Australia also released freedom of information documents showing correspondence and interaction between Empire and the office of energy minister Angus Taylor about its fracking plans in Beetaloo and the Coalition’s grant program.

The documents show Empire invited Taylor to visit its first Beetaloo well in the Northern Territory in October 2020. Taylor’s pecuniary interest register shows Empire paid for a “return charter flight and hospitality” for the minister.

Three months later, it asked Taylor’s office to give it more information about the grant program.

“Just before Christmas we discussed the Beetaloo Grant Program,” an unidentified staff member of Empire wrote to Taylor’s office. “Have you been able to identify the eligibility criteria and application process? Or could you please put me in touch with someone in Minister Pitt’s office who may be able to assist?”

Taylor’s office referred questions about the documents to Pitt’s office.

Pitt said: “Grants are provided to companies that possess the highly specialised skills to meet the challenges of developing the basin as determined by an expert assessment panel.”

The process for awarding the grants includes an assessment by the industry department of an applicant’s eligibility, followed by consideration and a recommendation from an expert panel.

Pitt said the government was working with the Northern Territory government to fast-track projects and “realise the enormous potential of the Beetaloo”.

In a statement, Empire Energy said it had acted consistently with its social, environmental and governance standards.

“The grants are consistent with the approach Coalition and Labor governments have taken in multiple jurisdictions to support resource development and bring forward economic, energy and social benefits,” a spokeswoman said.

350.org Australia senior campaigner Shani Tager described the use of the grants as a “brazen misuse of taxpayer funds”.

“Australia is coming dead last in the world on climate action and it’s because coal, oil and gas companies are embedded in our politics and that’s got to end,” Tager said.

“While the Senate is taking the time to do an inquiry and investigate oil and gas in the Beetaloo Basin, Keith Pitt is giving our public money to Liberal party donors for fracking.”

The Protect Country Alliance, part of the Lock the Gate Alliance, said the Morrison government was propping up a project that was still under assessment.

“Not only is he blind to cheaper, less polluting and reliable renewable energy alternatives, but he [Pitt] has gifted a fracking company $21m in public money when the Territory government has not finished assessing Empire’s environmental management plan,” spokesperson Graeme Sawyer said.

The alliance added that Empire Energy would also benefit from $173.6m in funding from another government program to upgrade roads that will support the expansion of the gas industry in the Northern Territory.

In response to these claims, Pitt said: “Australians should be wary of the propaganda spread by these activists and the nonsense they peddle.

“Australia has a strong record when it comes to reducing emissions. They’re down 20% on 2005 levels, well ahead of New Zealand, Canada and the US and on track to easily meet our 2030 Paris targets.

“The Coalition government is successfully reducing emissions and at the same time supporting new jobs in the gas sector.”

The Morrison and Gunner governments are paying for upgrades to the Buchanan Highway, Western Creek Road and Gorrie Dry Creek Road, which lead to tenements held by the company Pangaea.

In April this year, Empire Energy announced it intended to acquire a majority stake in Pangaea.

The Beetaloo Basin is one of five gas basins that the Coalition has flagged for “unlocking” and $28.3m was set aside to develop strategic basin plans to accelerate their development.

The move is part of the prime minister Scott Morrison’s plan to help revive the coronavirus-stricken economy through increased domestic gas production.

When Taylor visited Empire’s drill site in October, he described Beetaloo as “a world-class resource that has the potential to drive significant development in the Top End to create local jobs and help Australia remain a world leader in gas”.

“The Beetaloo Basin has the potential to supply more gas to Australian homes and manufacturers, helping to increase competition and drive down gas prices across the market. This will mean more Australian gas is working for all Australians,” he said.

Espie has in the past made large donations to the Liberal party and the Liberal-aligned Menzies Research Centre, including $100,000 to the federal Liberal party in 2010-11 and $50,000 in 2015-16. Those donations were made well before he joined Empire and the Guardian does not suggest they were in any way linked to the grants.

Empire Energy also donated $25,000 each to the Country Liberal and Territory Labor parties in the lead-up to the territory election last year, which saw Labor reelected. 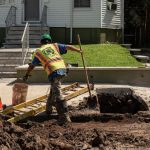 ‘Our future might not look the same’: wildfires threaten way of life in California’s mountain towns | California