The government will spend more than £1bn helping schools, hospitals and industry to reduce greenhouse gas emissions and encourage the growth of new low-carbon technologies in the UK, under plans set out on Wednesday.

Kwasi Kwarteng, secretary of state for business, energy and industrial strategy said: “We were the first major economy to put into law our target to end our contribution to climate change, and today we’re taking steps to be the first major economy to have its own low-carbon industrial sector. Ahead of Cop26 [the UN climate summit to be hosted in Glasgow this November], the UK is showing the world how we can cut emissions, create jobs and unleash private investment and economic growth.”

However, the £1bn does not represent new spending, but refers to already announced spending that is now being allocated to specific projects.

The launch of the industrial decarbonisation strategy comes as the UK prepares to host vital UN climate talks, called Cop26, postponed from last November owing to the Covid-19 pandemic, and the day after the government’s integrated review of defence and foreign policy placed the climate crisis as the UK’s “foremost international priority”.

The government has allocated £171m to an industrial decarbonisation fund, to be split among projects including hydrogen gas and carbon capture and storage technology at sites in Merseyside, Teesside, Humber and Wales, and offshore engineering works in Scotland. The government said the strategy would create about 80,000 jobs over the next 30 years, with the aim of cutting emissions from industry by two-thirds in the next 15 years.

Separately, about £932m will be spent on 429 projects upgrading public buildings, including schools and hospitals, with heat pumps, solar panels and insulation. Areas to benefit include Manchester, where 36 schools and 22 leisure centres will be upgraded, as well as the transport authority, police and fire service, for about £78m; Leicester, where the city council will receive £24m for upgrading 93 buildings including 56 schools; and £24m for Hertfordshire county council to upgrade 183 council buildings, including 74 schools and 23 emergency service buildings.

The plans for public buildings stand in stark contrast to the government’s scheme for helping people upgrade their draughty homes, which make up 14% of the UK’s total emissions. The green homes grant scheme, originally intended to be worth about £1.5bn, has had most of that funding withdrawn after a troubled start, including builders left unpaid and homeowners unable to get help.

Ed Mathew, campaigns director at green thinktank E3G, said: “This will help slash carbon emissions [from public sector organisations] while helping them to save millions on their energy bills – it’s a no-brainer. The government now needs to put in place a long-term funding programme to help all households to do the same, following recent cuts to the flagship Green Homes Grant scheme.”

Ed Miliband, Labour’s shadow business secretary, contrasted the government’s industrial plans with other countries’ efforts towards a green recovery from the Covid19 crisis, and said the strategy did not go far enough.

“Once again, the government talks a big game on green but doesn’t deliver with nearly the scale or ambition that’s necessary. None of this money is new – these announcements simply allocate money already announced,” he pointed out. “Strip away the rhetoric and we see the fact that while Germany is investing €7bn (£5.9bn) in a hydrogen strategy, our government is investing a tiny fraction of that. We need an ambitious green stimulus to support industry to decarbonise ​and secure jobs for the long-term, starting with a £30bn green recovery. The government has failed to deliver yet again.”

Kat Kramer, climate policy lead at Christian Aid charity, said: “The government dismally continues to offer sops to the fossil fuel industry, including through nods to hydrogen produced from polluting fossil fuels and unproven-at-scale technologies like carbon capture and storage. Instead, the government need to focus on deep emissions cuts, while supporting a just transition to new green jobs for fossil fuel workers, and not propping up the very companies that have caused the climate crisis.”

One of the key elements of the industrial strategy will be to help the steel industry reach net zero emissions. Coking coal is essential to making steel and is the subject of a major row over a proposed new coalmine in Cumbria. Proponents of the mine say that the coking coal it may produce will continue to be needed despite efforts to reduce emissions, but opponents say that to meet the UK’s net zero targets the industry will have to invest in alternatives.

Under the new strategy, the government wants steel-makers to reach net zero by 2035, which would imply phasing out coking coal at least by that date. Roz Bulleid, deputy policy director at the Green Alliance thinktank, said: “The country needs to move quickly if our steel industry is not to be left behind. Other countries, such as Germany and Sweden, already have trials in place for low carbon steel-making using hydrogen. It is becoming increasingly clear that the future of the steel industry will need to be based around clean steel that does not add to our carbon footprint.”

Industry representatives welcomed the government’s decarbonisation strategy. Rain Newton-Smith, chief economist at the CBI employers’ organisation, said: “Creating and championing competitive low-carbon industries will ensure the benefits of a green economic recovery, and the longer term transition to net zero, are shared across the country. Ahead of Cop26, this is a welcome demonstration of the UK’s commitment to act on climate change, to make our post-pandemic recovery a green one, and to give businesses the certainty they need to invest in the technologies of the future.”

Stephen Phipson, chief executive of Make UK, the manufacturers’ organisation, said: “The promise of financial help is critical. Britain’s big corporations have large ringfenced budgets for green initiatives, but our smaller firms will need support to make sure they are able to make the changes necessary to ensure the UK meets its carbon targets, and that they can benefit from the dramatic changes to the way industry will work in the coming years.” 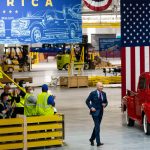