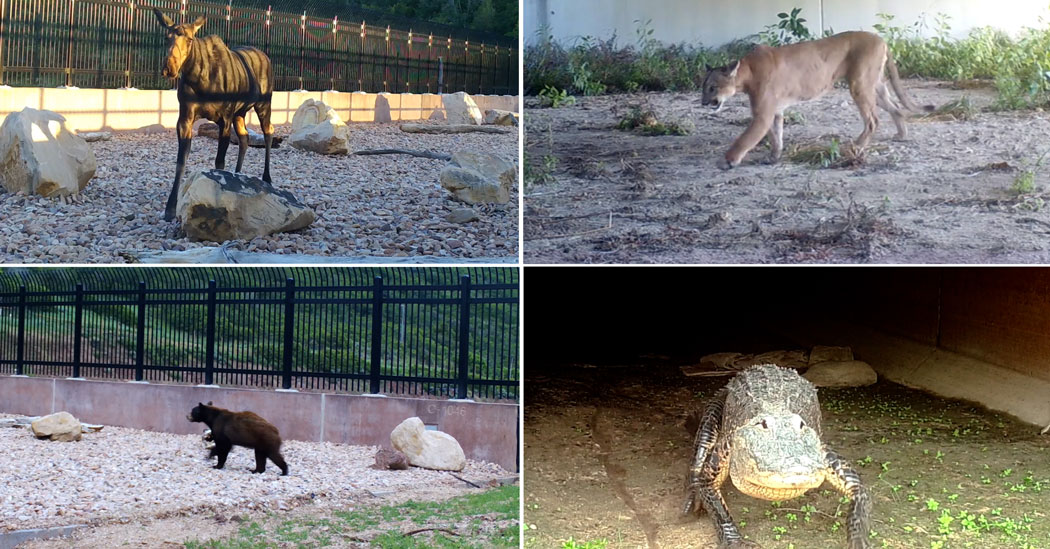 There are few things Americans can agree on these days. Wildlife crossings, it seems, are one of them.

The engineers were used to building overpasses for vehicles, not wildlife. But every spring and fall, collisions with mule deer and pronghorn spiked in the Pinedale region of Wyoming, where Route 191 disrupted their age-old migration paths. So the state Department of Transportation joined with the state wildlife agency and nonprofit groups to create a series of crossings, including the one pictured above. Collisions have dropped by roughly 90 percent.

“It felt like we finally found something that works,” said Jennifer Hoffman, an engineer at the Wyoming Department of Transportation. “People are pretty hesitant to do something new. Once you’ve done it, and it does what you said it would do, they’re willing to do it more.”

Examples like that, along with earlier success stories from Canada and Europe, have led to a broad consensus on the value of animal crossings, according to environmentalists and transportation officials alike.

“This is the time of the wildlife crossing,” said Mike Leahy, director of wildlife, hunting and fishing policy at the National Wildlife Federation. “This issue has been building for decades and it was like pulling teeth. And now everyone who works on these issues seems to get it.”

This mule deer is trying to cross Interstate 80 in the Pequop Mountains of Nevada.

Since 2010, the state has built five large overpasses in the area, including this one, which deer started using before it was even finished.

Eighteen other new structures have gone up to facilitate wildlife crossings across the state.

Research shows that, across the country, there are one to two million collisions between vehicles and large animals each year. These accidents cause more than 26,000 human injuries and about 200 human deaths.

Funding for crossings is a challenge, but that may get easier, too: A bipartisan Senate version of the transportation bill being hammered out in Congress includes $350 million for wildlife crossings and corridors.

States often piggyback wildlife structures or modifications onto other road improvement projects, and they are still experimenting with how to get the best value for money. In Utah, a team from the state’s Transportation Department was planning a new truck lane on a stretch of highway that was a hot spot for collisions with moose, elk and deer. But, given the conditions at their site, they didn’t have the money to build something as wide as most other overpasses.

So, they worked with the budget and topography they had, constructing a wildlife bridge that was remarkably narrow considering how long it was.

The bridge was finished by the time they hired Nicki Frey, a wildlife biologist with Utah State University, to study the effectiveness of the crossing. When she first saw it, she was startled by how skinny and stark it looked. “Oh my gosh, how is this ever going to work?” she recalled thinking.

“I was really only expecting maybe a handful of successful crossings in the first year,” Dr. Frey said. “We expected to see a lot of animals approach the overpass, sort of sniff around, maybe make some anxious looking movements and then decide not to use it.”

But when she reviewed the images from the trail cameras, she was stunned.

A wide variety of animals were using the overpass, often without hesitation. Within the first several months of her study, she documented hundreds of crossings.

“They’re actually just using it on a daily basis,” Dr. Frey said. “We had coyotes hunting on it. We had bobcats hunting on it. We have marmots that just come and lounge in the sun and then leave. Rabbits and some of the smaller mammals like ground squirrels and chipmunks, they are just coming to forage for seeds and whatnot and then leaving. So it’s not even just, ‘Oh, my gosh, I’ve got to get across the highway.’ It’s just part of their habitat now.”

The one target species that has been almost absent is elk.

“This is only the beginning,” said Matt Howard, a wildlife biologist with the Utah Department of Transportation. “If it’s going to follow the patterns we get from other crossings, it’s going to increase for four or five years, and then it plateaus.”

While transportation officials emphasize that human safety is the main motivation for these new projects, the structures don’t come a moment too soon for animals. Development continues to erode wildlife habitat, disrupt migration corridors and fragment groups, leading to population collapse and unhealthy genetic isolation. Looming large is another threat: climate change. As certain species move in search of cooler, moister conditions, they will have to contend with busy roadways.

There are more than a thousand dedicated wildlife crossings in the United States today, up from just a few in the 1970s and 80s, according to Patricia Cramer, an ecologist who has studied and worked in the field for two decades. But only 10 or 20 are overpasses. While overpasses tend to get the most attention, underpasses and tunnels are far more common.

Southwest Florida has more than 50 dedicated wildlife crossings that allow animals to pass under roads.

They were set up to protect the state’s endangered panther population.

But lots of other species make use of them.

But building them in appropriate places saves money overall, his research shows. Wildlife collisions cost $8 billion per year for things like vehicle repair, medical expenses, towing and the removal and disposal of animal carcasses. Thus far, the insurance industry has not helped pay for crossings, something advocates and officials say they hope will change.

Still, the crossings are worthwhile public safety measures, Dr. Huijser said. He pointed out that insurance companies aren’t responsible for fixing other dangerous roadway issues like curves that are too tight.

The costs and visual impact of the related fencing have sometimes provoked pushback from the public, but transportation officials say they’ve been more surprised by how popular they’ve been.

At the Flathead Indian Reservation, south of Glacier National Park in Montana, wildlife crossings helped persuade the community to agree to a road-widening project. For years, tourists, truckers and commuters would race down a treacherous section of U.S. Highway 93 with little or no shoulder. The state wanted to widen the highway to four lanes from two and add a turning lane, but the tribes who live there — the Bitterroot Salish, Upper Pend d’Oreille, and the Kootenai — were concerned about how a larger highway would divide their communities and affect wildlife, particularly threatened grizzly bears. They eventually agreed to a project that included 42 wildlife crossings.

Another boost to the popularity of wildlife crossings: Trail camera footage going viral. One of the most viewed clips wasn’t even a designated structure, just a culvert under a busy highway in California’s Santa Cruz mountains. A coyote and badger, recorded by scientists studying how animals interact with roadways, looked like friends.

The following clip, of a bobcat kitten and its mother under a bridge along Highway 68 near Salinas, Calif., was part of a similar study. With substantial private donations, the state is planning an $87 million crossing for mountain lions that would be the biggest of its kind in the world.

Efforts tend to focus on large animals, as those collisions affect people. But an untold number of smaller animals are also struck everyday.

In Vermont, for example, transportation officials are planning a snake underpass for a section of road scheduled for an upgrade. Wildlife officials have documented substantial rattlesnake roadkill in the area, and they hope a crossing will reconnect the state’s two remaining rattlesnake dens.

While most crossings are built by state transportation departments, some have come from citizens. In Monkton, Vt., a group of amphibian enthusiasts was appalled at the carnage that would happen on rainy nights each spring as salamanders and frogs that had overwintered in the forest crossed a road to breed in the vernal pools where they were born.

In the mid-2000s, a small group of volunteers would walk along the road to count them, moving the creatures to the other side as they went. But more salamanders were constantly crossing in front and behind.

“It was heart wrenching when cars came by,” said Chris Slesar, who is the environmental resources coordinator for the Vermont Agency of Transportation but got involved with the Monkton salamanders as a volunteer.

And so the community raised donations and grants for two amphibian crossings, which opened in 2015.

Scientists warn that even as wildlife crossings gain traction, they are only one piece of the work needed to reconnect fragmented populations of wildlife. And the environmental value of crossings will backfire if they are used to get new roads approved in places where the impact to animals is too high.

“I want everyone to be super excited about wildlife crossings, but I don’t want people to forget that a wildlife crossing is like a Band-Aid,” said Trisha White, an environmentalist who was integral in moving wildlife crossings from the fringes to the mainstream in the United States. The structures, she emphasized, can only fix a small part of the road’s damage to wildlife habitat.