Joel Fitzgibbon has blasted an upset victory in the Senate orchestrated by the Greens and Labor preventing the Australian Renewable Energy Agency (Arena) from investing in carbon capture and storage as “ideological craziness”.

Labor, the Greens and crossbench senators combined on Tuesday night to disallow a controversial instrument written by the energy minister, Angus Taylor, that would have allowed Arena to invest in a broader range of technologies, including some used to abate fossil fuels.

The expectation ahead of the vote was the disallowance would fail because One Nation senators would vote with the Morrison government.

But the One Nation leader, Pauline Hanson, abstained. Crossbench senators and interested stakeholders attribute Hanson’s decision to sit out the vote to her dislike of gas companies which pay no tax and pay dividends to foreign shareholders benefiting from the changes.

The Morrison government intends to reword its instrument to expand the remit of Arena and reintroduce it before the end of the parliamentary sitting week in the hope of persuading Hanson to drop her objections.

But after Tuesday night’s upset, the Greens and Labor hailed their success.

The shadow climate and energy minister, Chris Bowen, declared: “The LNP keeps attacking Arena and the CEFC (the Clean Energy Finance Corporation) and Labor will continue to defend them.”

But Fitzgibbon, the former veteran Labor frontbencher who left the shadow cabinet during an internal dispute about climate and energy policy, rubbished the outcome during an interview on the Sydney radio station 2GB.

“It is regrettable that Labor is now opposing $1.2bn of public investment in carbon reducing innovation simply because we don’t like the entities being used to spend the additional money,” Fitzgibbon said. “This is ideological craziness.”

Fitzgibbon has been expressing concern about Labor’s position on the Arena disallowance motion for some weeks, and was not in the lower house when the motion was debated there.

But his full-frontal attack on Wednesday follows the return of Barnaby Joyce to the leadership of the National party.

As the major parties gear up for an election contest either this year or next, the Nationals are targeting federal seats in the Hunter Valley, including Fitzgibbon’s Hunter electorate, and Joyce is regarded as an effective advocate for the Nationals in regional seats with significant fossil fuel interests.

Fitzgibbon suffered a massive swing against him in his previously safe Labor seat at the 2019 election. The constituent backlash at home has prompted his sustained public campaign against climate policies that he regards as being too ambitious.

The veteran Labor rightwinger told the broadcaster Ray Hadley on Wednesday morning the procedural victory in the Senate sent voters a message that the ALP was against carbon capture and storage, when Labor had never opposed CCS.

Asked by Hadley whether Labor supported the disallowance motion tactically, as a cost-free gesture to progressive voters, knowing that the attempted disallowance would likely be defeated, Fitzgibbon said: “I don’t know what was in the minds of the people running this tactic, but what I know is we won.

“We should not have won … Pauline not turning up gave us the victory I didn’t want.”

Fitzgibbon then doubled down on other environmental issues. He told Hadley that Labor needed to get on with supporting the government’s efforts to overhaul the Environmental Protection and Biodiversity Conservation Act.

He declared it was time to “get on with it” with the controversial overhaul because that was the desire of the Western Australian premier, Mark McGowan, and the resources industry.

Fitzgibbon also blasted the fact the former deputy prime minister Mark Vaile had not been able to take up a position as chancellor of the University of Newcastle because of a backlash over Vaile’s links to a coal company.

The former National party leader and current chairman of Whitehaven Coal was due to take up the position in July. The university council voted to appoint him in early June but within 48 hours one member had resigned in protest, and public controversy ensued.

Fitzgibbon said the fracas led by “excessive progressives” conducting a “shrill and misleading campaign” led to a missed opportunity to fuse divisions between people concerned about the risks of runaway global heating and the fossil fuel industry.

The Labor MP said Vaile had made it clear he wanted to work with the university to achieve an aspiration of reaching net-zero emissions.

“What an opportunity to say we are all coming together … but sadly, the hard left, the excessive progressives as I call them, are just on an ideological bent.”

Hadley noted at the conclusion of the conversation: “The world has gone completely cuckoo”. 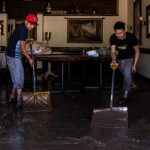 43 Die as Ida, Deadliest Storm Since Sandy, Devastates the Northeast